Anything can happen in life, especially nothing. — Michel Houellebecq — Wednesday August 10th — 14:30 (CEST) —

“What art does — maybe what it does most completely — is tell us, make us feel that what we think we know, we don’t. There are whole worlds around us that we’ve never glimpsed.” Greil Marcus — Wednesday August 10th — 14:30 (CEST) —

I love listening. It is one of the only spaces where you can be still and moved at the same time. — Nayyirah Waheed — Wednesday August 10th — 14:30 (CEST) —

And Away They Go 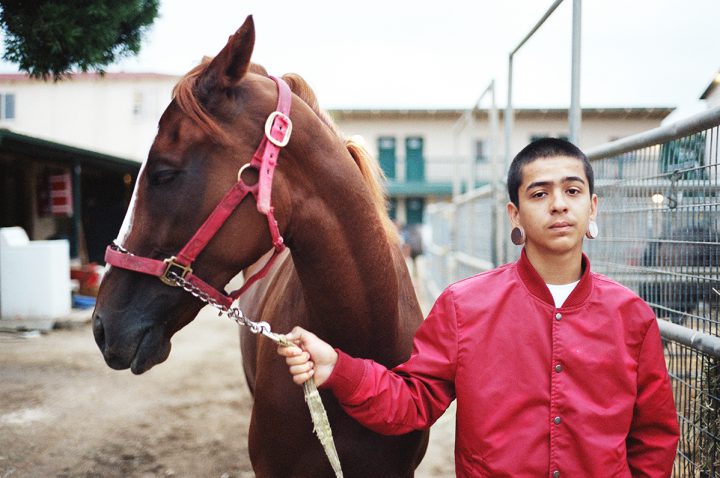 Another year, another inspirational Done to Death Projects publication by cultural tastemaker Chris Black, who for the first time collaborated with none less than the very talented Eric Chakeen. After assisting the three legendary New York photographers Terry Richardson, Dan Martensen and Ryan McGinley, Eric Chakeen was ready to produce his own work, which he has been doing in the last decade with great vigour — working on a long list of commissions with big names in fashion and pop culture, but also creating free projects of which the new publication is an excellent example. For the series named 'And Away They Go', Chakeen roamed around the racetrack of his hometown in the suburbs of San Diego; Del Mar. It resulted in a beautiful collection of striking photographs, documenting a subtly disquieting space, with everyone in this world apparently lost in a paradise of nostalgia. Both having a cinematic quality as much as the images being raw in your face observations, the series continues to captivate us profoundly, forming another incredible addition to Chris' Done to Death Projects catalogue. [ Continue reading ]

We are big fans of Chris Black's New York City-based Done to Death Projects, which has been releasing inspirational printed titles over the course of the last few years. Among the publications one finds the work of another one of our favorites; photographer Mikael Kennedy, next to the recent title which we really like by Chris Black himself: 'I Know You Think You Know It All: Advice and Observations For You to Stand Apart in Public and Online' and now Done to Death Projects presents 'Bountiful', a new book from the very talented young photographer Noah Emrich. During the summer of 2013, Emrich embarked on a 12.000 mile trip around the United States, with the goal to capture post-recession America, searching for the remainders of the once glorious American Dream. The result is a haunting series putting the finger on the sore spot of a proud and powerful country reluctantly having to find a new identity to match its current state of being.  [ Continue reading ]

We've been a fan of the inspirational work of American photographer Mikael Kennedy for years now. After releasing the incredible Done to Death Projects publication 'California' last year, he has now returned on its own with a sequel to that series named 'New Mexico'. In the same familiar toned down color palette, Kennedy once more takes the spectator on one of his tremendous journeys through wide open landscapes, which he distilled into a collection of 31 color photographs blessed with his signature aesthetic, taken during his stay in the American state last November. Kennedy presents the new project in a tremendous 44-page zine, which was printed in his homebase New York City - limited to 200 copies. We can't get enough of Kennedy's images which evoke somewhat of an escapist and melancholic sentiment within the beauty of the depicted landscapes, making us want to hit to road every time we lay our eyes on them. [ Continue reading ]

I Think Things Are Getting Better

Over the last few years Instagram has risen to become the most revealing creative social medium which gives insight into the lives of people all over the globe. With technology now truly supporting the creative needs one can slowly observe something like a canon within photography disclosed within the unique preconditions of the now mature medium. A very interesting project out of this new emerging field is the series 'I Think Things Are Getting Better' by the New York City-based Amardeep Singh, which has been translated back into a more traditional form, a book, by Chris Black's Done to Death Projects, also responsible for our friend Mikael Kennedy's last publication 'California'. The new outing by Done to Death Projects documents a year and a half of the life of Singh caught in 97 digital photos, taken with his phone and initially shared on his Instagram account, with the final photo dating back to only 5 October 2014. The photographer has a tremendous eye for detail both when it comes to shape and color, which in the publication is underlined on every page through the juxtapositioning of the images forming an incredible example of what soon very likely will be seen as an important new genre within photography. [ Continue reading ]

Mikael Kennedy is a New York City-based commercial and fine art photographer, which we have been following since the very beginning of our online endeavors. We first noticed his extraordinary work through his internationally acclaimed Polaroid travel blog; Passport to Trespass, which documented his 10 years of wandering the United States with a Polaroid SX70, concluded by the photographer in 2011. Now a days Kennedy’s Polaroids are part of the permanent collection at the Museum of Fine Arts in Houston, as well as in private collections worldwide. Other work of his has appeared in print in The New Yorker, Nylon, Dazed & Confused, WWD, and his photography has been being profiled online with GQ, Esquire, Time, Newsweek Magazine, and the WSJ, among others. Having been inspired by both Mikael's nomadic way of living and the elegant aesthetic one finds in his works, oftenly created during these travels: we now ask him what has inspired him along the road. [ Continue reading ]

We have been a fan of the work of New York-based Mikael Kennedy for some years now and really appreciate his latest series 'California'. The series captures one week in California in which the photographer is clearly on the move. The beautiful photographs with the familiar toned down color palette show the wide landscapes of the American state with only sometimes allowing traces of civilization to play a minor role within the frame. A road, roadside fences, an electrical cable, the inside of the car a photograph was taken in, and just a little glimpse of a house. Kennedy places the geographical entity of the state of California first and its inhabitants second. The pictures therefore evoke somewhat of a lonely and melancholic sentiment within the beauty of the depicted landscapes, making the urge to visit the beautiful area even greater. 'California' has been published by Done To Death Projects in a limited quantity zine of 100 pieces which sold out within four days. [ Continue reading ]