“What art does — maybe what it does most completely — is tell us, make us feel that what we think we know, we don’t. There are whole worlds around us that we’ve never glimpsed.” Greil Marcus — Friday June 17th — 17:33 (CEST) — 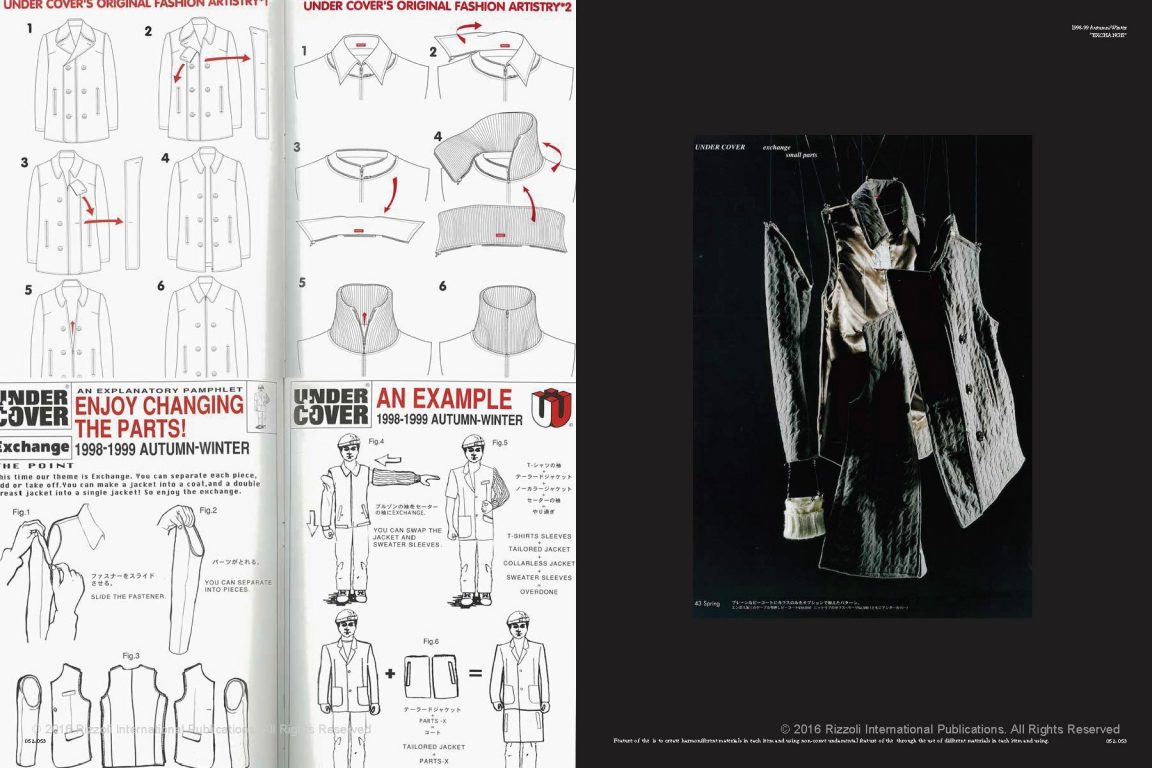 Next month, on the 12th of July, American publisher Rizzoli will add another fashion orientated publication to its excellent catalogue with the release of the very first comprehensive book on the work of Japanese avant-garde punk designer Jun Takahashi of UNDERCOVER — which we discovered through our good friend Samuel de Goede (make sure to subscribe to his weekly newsletter for more tips like this!). Takahashi —together with two Japanese designers who were also granted Rizzoli publications on their work: NIGO of A Bathing Ape and Hiroshi Fujiwara of Fragment Design and the recent (temporary) cutting-edge retail concepts The Pool Aoyama (now closed) and THE PARK – ING (opened since April)— is an icon of Harajuku streetwear and the presumptive heir to the heavy mantle of Japanese deconstruction (officially crowned by Rei Kawakubo herself). Although all three have (and still do) played an integral rol in this second wave of worldwide influential Japanese fashion design succeeding the designers of the Eighties, it is arguable that Takahashi has left the biggest or most resonating mark on ‘the culture’, especially from the moment some years ago when he started his still ongoing collaboration with Nike for the GYAKUSOU line, which stayed very close to his creative vision, but introduced his designs to a much larger audience than his own labels.

From the very beginning of his rise, the fashion of Takahashi is not born out of an excessively intellectualized agenda. While not quite populist, his generative influences are instead romantic —sometimes even gothic. A fixture of the Paris collections for more than ten years—plus seventeen uninterrupted seasons in Tokyo prior to that—Takahashi’s life’s work confirms a maturation from self-conscious artifice and rebel pastiche to a steely, withering elegance all his own. Hailing from Gunma Prefecture like his friend NIGO, Takahashi’s long association with the undisputed king of Ura-Harajuku in the early 1990s is now the stuff of local fashion lore. But Takahashi would blaze an entirely different path to legend and notoriety. The violent rending and hasty reassembly that characterized his early work, its calculated imperfections and sutured seams, have given way to collections that he himself now calls “sexy and feminine.”

Seeing the deeply emotional vision of the designer, stretching over 27 years, collected in the elegantly designed book, makes one realize how profound and influential the vision of Takahashi was and still is, which makes this book by Rizzoli a must have. Make sure to get it (pre-0rdered) soon, as it will sell out in no time once its released..

UNDERCOVER has been at the forefront of Japanese streetwear for over a decade now. With a combination of distinct punk influences and the finest Japanese craftsmanship, the label has amassed somewhat of a cult at home and abroad, yet unlike many of his fellow Harajuku heavyweights, designer Jun Takahashi remains slightly more mysterious making the brand that much more fascinating.

We love how Rizzoli have created yet another insightfully curated book with fashion-filled chapters devoted to Takahashi’s sketches, graphic work, collaborations, and most innovative designs to date. Lavishly illustrated with more than 200 photographs and in-depth essays by fashion writers, curators, and colleagues, this book gives readers first time access into Takahashi’s UNDERCOVER, one of the most personal yet multidimensional clothing lines in contemporary fashion.