I love listening. It is one of the only spaces where you can be still and moved at the same time. — Nayyirah Waheed — Wednesday September 27th — 11:16 (CEST) —

“What art does — maybe what it does most completely — is tell us, make us feel that what we think we know, we don’t. There are whole worlds around us that we’ve never glimpsed.” Greil Marcus — Wednesday September 27th — 11:16 (CEST) — 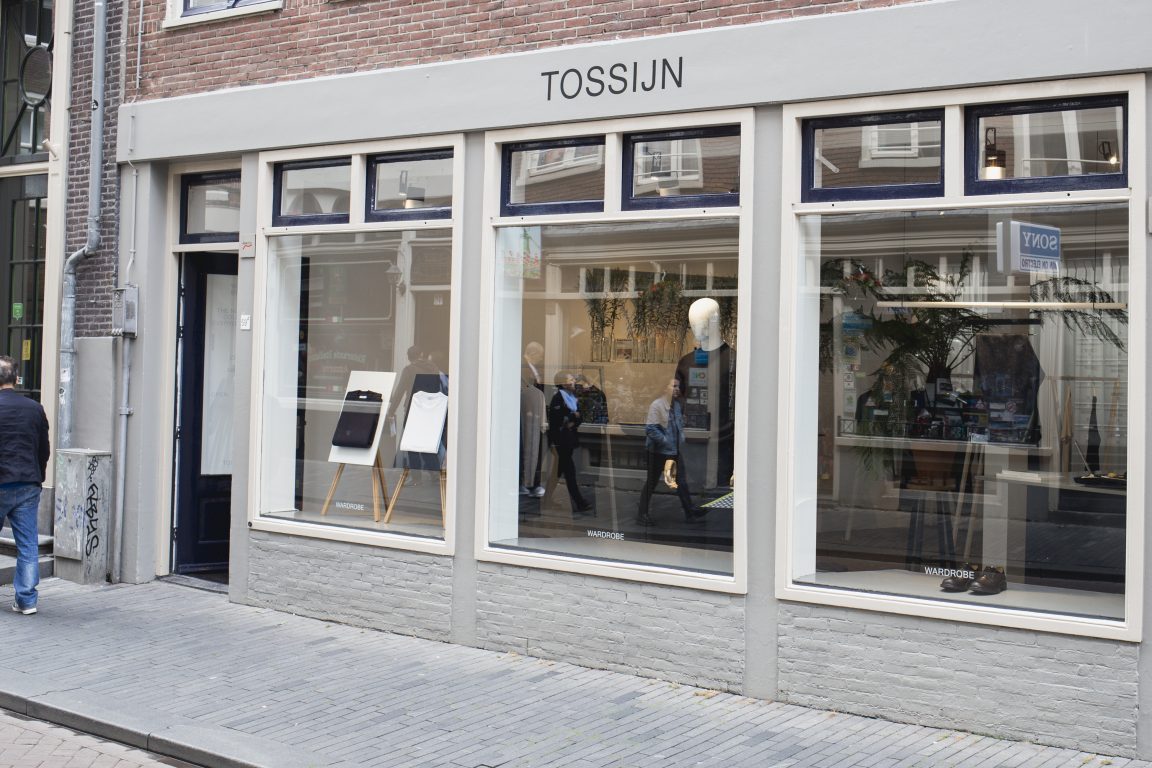 Among them are streetwear household names like Amsterdam’s own giant Patta, the Comme des Garçons BLACK store, and most recently Stüssy also opened its doors in the street. Next to, for instance, newcomers like Bonne Suits, who shares a space with SMIB and The New Originals. Although we appreciate these streetwear brands, for us the appeal of the street was taken to the next level by another recent addition, as in April our friend Koen Tossijn also found his way to the infamous Zeedijk and opened his first brick and mortar store ever for his brand TOSSIJN — introducing a well needed touch of understated luxury and a toned down color palette, next to all the logos and graphics at his neighbors.

We have known Koen from the moment he stepped up in the denim circle of Amsterdam — starting as a bespoke denim tailor under the name Moos Tailored Basics back in 2010 — and have appreciated every step that eventually brought him to his store today. In between his beginnings and now, he played a part (as: Atelier Tossijn) in the Centraal Museum exhibition ‘Blue Jeans’, that we designed in 2012, and he first introduced his ambitious non-seasonal collection named ‘Wardrobe‘ in 2015 under the mantra: “by bringing the things we surround ourselves with back to a minimum, you create more time and space.” With the label, Koen intends to speak to the people: “that have the desire to be tranquil and focused and want to improve life by looking for the right balance in a time dominated by choice and information.”

The new store, which is a milestone for TOSSIJN, exemplifies every single one of those goals. Clearly designed with an eye for perfection and therewith from the same mindset as the clothing; it combines clean lines with elements showing a beautiful patina; natural materials with man-made constructions and a toned down color palette that forms the perfect backdrop for Koen’s Wardrobe. With Dieter Rams’ ‘Less but Better’, Yvon Chouinard’s ‘Let My People Go Surfing’ and ‘Super Normal: Sensations of the Ordinary’ by Naoto Fukasawa and Jasper Morrison lying around, it is instantly clear what ambitious goals Koen has set for himself and the brand.

It might even signify the beautiful side of the times we are living in: with related cultural influences, from different times and ends of the globe, finding their way into Koen’s contemporary vision for his own practice. The vast amount of information at hand at any moment, doesn’t in any way result in people truly understanding more than before. Of that we are sure. Yet, for those who take the time to find what really speaks to them, which Koen clearly has done, something new and relevant can grow out of the deeply rooted fundamental thoughts (which are more accessible than ever!) that it was based on. Those who seek perfection wherever it can be found, even when it hurts a little: they are the real durable fruits of globalization. At least we hope so.

For every item released under the TOSSIJN label, perfection was pursued by Koen. This is neither practical, for a small operation like his, nor the most economic decision in terms of margins. But those two elements are besides the point when one truly searches for the immaculate. The label stands for something you can trust, in the same way you knew Koen made a bespoke jeans especially for you in the past.

At this moment, it means when you buy a sweater, knitted hat or a t-shirt at TOSSIJN, you will be sure that it is expertly crafted in Umbria, Italy. With his recently released black sweater being a innovative work of art, as the merino wool is treated with Teflon, which surrounds each fibre with an invisible barrier: the weave withstanding dry dirt and more importantly the absorption of liquid substances, whether water or oil based. For his ready-to-wear jeans Koen travelled to Great Britain, where the beautiful 14 oz. selvage denim, dyed with organic indigo from one of the the world’s premium mills in Okayama, Japan, is created. The future will take him around the globe again, no doubt. Wherever he needs to go to find the perfection he is looking for.

In more than one way, TOSSIJN stands for everything we aspire to stand for ourselves. In our eyes, Koen represents the people who continue to focus on being as ambitious as possible at all time, despite being constantly tempted to take an easier route. TOSSIJN proves that eventually you will find a way to get your ideas out without having to scream, oftentimes, as the case with Koen, by meeting the right people. Finding those people who share a certain esoteric belief is another beautiful fruit of these digital times — we are very grateful that Koen was able to take it this far already in Amsterdam, now it is time for the rest of the world to get to know TOSSIJN.

Whenever visiting Amsterdam, make sure to visit both the Zeedijk and get familiar with Koen’s TOSSIJN store on number 59A. (It’s only a 10 minute walk from the central train station.)