“What art does — maybe what it does most completely — is tell us, make us feel that what we think we know, we don’t. There are whole worlds around us that we’ve never glimpsed.” Greil Marcus — Thursday December 22nd — 20:51 (CET) —

I love listening. It is one of the only spaces where you can be still and moved at the same time. — Nayyirah Waheed — Thursday December 22nd — 20:51 (CET) — 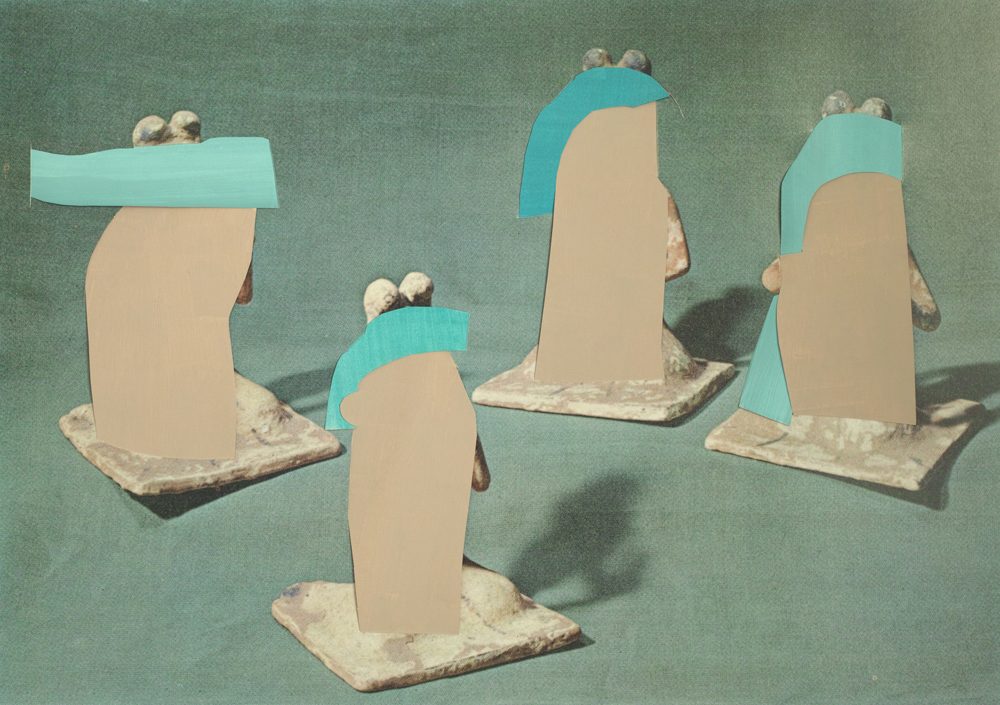 Last Saturday, one of our favorite Amsterdam-based galleries; The Ravestijn Gallery, opened a new show by Dutch collage artist Ruth van Beek named ‘The Situation Room’, which we feel ends a very interesting year of exhibitions, following other favorite shows by Vincent Fournier and Robin de Puy. The work of van Beek originates in her ever-growing archive. The images, mainly from old photo books, are her tools, source material and context. By folding, cutting, or adding pieces of painted paper, she rearranges and manipulates the image until her interventions reveal the universe that lay within them.

With her imagery, van Beek triggers the imagination of the viewer: passive human hands are animated, objects turn into characters, and abstract shapes come to life. The original image may have been taken out of context, but the familiar imagery –the formal photography of an instruction book, a clearly displayed object, or a staged action– remains recognizable, and thus speaks to our collective memory. Contrasting elements engage in conversation in van Beek’s work: the dead past coming to life; the literal and the abstract; displaying and concealing expressively; both the limitation and the endless possibility of an archive. Hereby, van Beek joins a new generation of artists that, by finding restriction in closed archives, offer a counterweight to the limitless availability of information. The constant organization of the world around her even gets a literal representation in van Beek’s work: the rearranging hands of instruction books appear and reappear, like a self-portrait of the artist as a creator.

The images included in Ruth van Beek’s archive are constantly engaging in conversation. Repetition, rhyme, coincidences and parallels form the alphabet of an obscure language. The artist rearranges the pictures to create brand new images, but emphasizes the conversations between them.

The same goes for van Beek’s exhibition at The Ravestijn Gallery, in which the grotesque figures that populate ‘The Situation Room’ converse with one another. They are part of a scene, react to the room as if they were a Greek chorus, or confront the viewer directly. Van Beek subtlety transforms the exhibition space into an exuberant and ominous carnival. Abstract shapes are brought to life and make for a cast of exaggerated characters, turning the entire room into a masquerade.

Next to the new exhibition in Amsterdam, Ruth van Beek‘s work has been shown worldwide in various solo and group exhibitions. Recently, her work was part of exhibitions in London (Flowers Gallery, 2015), Antwerp (Gallery51, 2015) and San Francisco (Fraenkel Gallery, 2014). RVB Books in Paris has published her books ‘The Hibernators’ in 2011 and The ‘Arrangement’ in 2013. Her most recent book, ‘The Levitators’, was launched at this year’s New York Art Book Fair and the Unseen Photo Fair 2016 in Amsterdam. The Arrangement was on the 2014 shortlist for the Aperture Book Award. Her work is regularly published in magazines, such as Time Magazine, The New York Times, Capricious, Foam Magazine, Fantom Magazine, Kunstbeeld, L’Of ciel, IMA Magazin (Japan) and The British Journal of Photography. In collaboration with Centerfold Editions, she’s working on an ongoing series of artist publications called ‘The Manual’, of which three have come out so far, with the third edition still available.

All images courtesy The Ravestijn Gallery and the artist.

For all information on ‘The Situation Room’ see here