“What art does — maybe what it does most completely — is tell us, make us feel that what we think we know, we don’t. There are whole worlds around us that we’ve never glimpsed.” Greil Marcus — Monday November 28th — 15:01 (CET) —

I love listening. It is one of the only spaces where you can be still and moved at the same time. — Nayyirah Waheed — Monday November 28th — 15:01 (CET) — 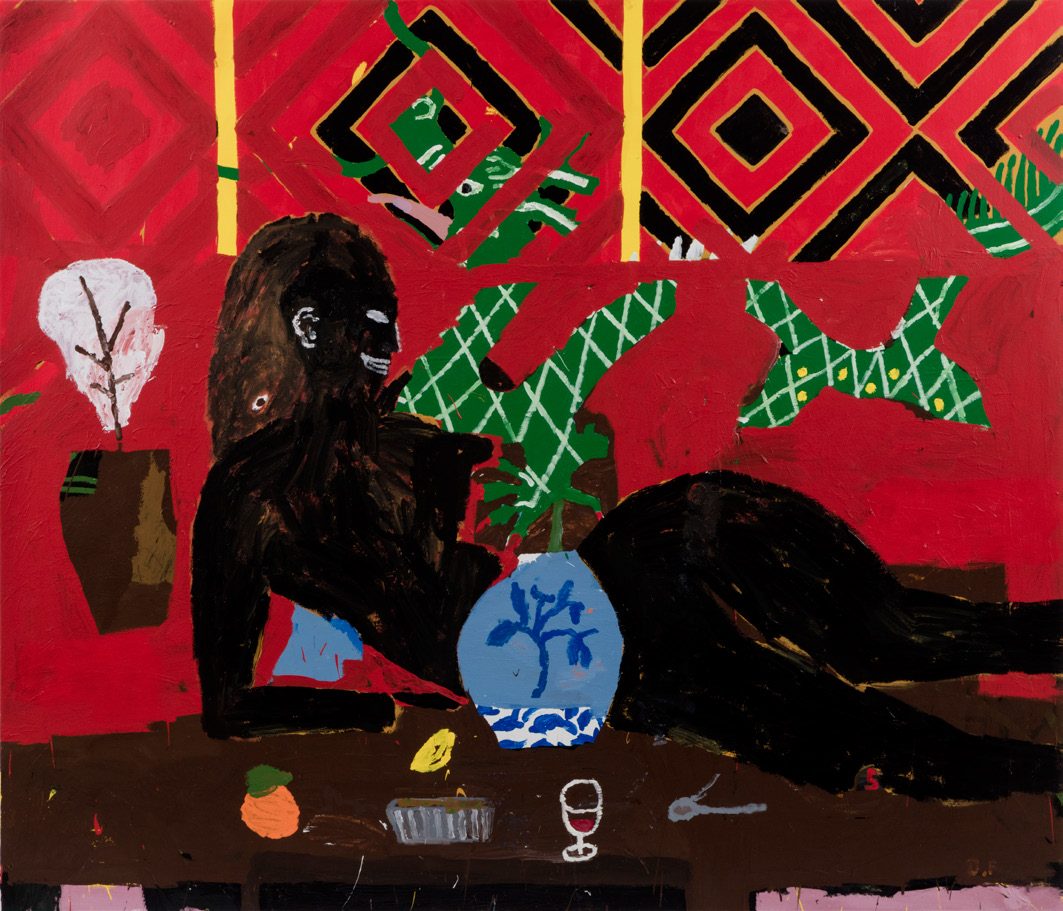 When we discovered the paintings of British artist Danny Fox, somewhere in the early Summer of last year, we experienced an excitement that hardly still occurs in that kind of encounters, especially in his discipline. His work, as much as the artist behind it, are of the hate-or-love-kind, and we fell head over heals for his uncompromising creations. At that time Fox had refocused the subject-matter of his unpolished paintings from painful self-experience to the more uplifting things he appreciates in life resulting in scenes with boxers, horses, cowboys, snakes, fruit, transsexuals, strippers or patterns reminiscent of ancient Greek decoration. It marked the start of a new phase, with the St Ives-born turning into a rapidly rising star in the art world, giving him the opportunity to travel beyond London, where he was based, moving to Los Angeles. An exhibition with new works opened last Friday, bringing Fox’s work to Denmark for the first time, given the moniker ‘A Spoon With The Bread Knife’ — a reference to English rhyming slang where the bread knife translates to wife and spoon to cuddle. His new works show his familiar signature, through which he has created new captivating narratives, exploring a new richness in the complete image and bigger sizes in his canvasses, seemingly indicating that all this is only the start of what we can expect from one of our undisputed favorites in contemporary painting.

…Strong women, men on horse back – racing to their future or escaping their past, classic fruit bowls, a glass of red wine – half empty or full, depending on current mood and perspective, bad bananas, a specific red color borrowed from an old colleague and spoons…

Fox’s work is full of references, conversations and possible translations. In his paintings he engages a rich history of both figuration and abstraction. He does this with the natural grace and conviction that comes from hard work and experience. Painting like there is no tomorrow. Painting like there is nothing else but painting. He walks into a bar and strikes up a conversation with Matisse, Picasso, Van Gogh and Basquiat. He enters the painter’s cave to continue the development of motifs that seem as long as human history. Humanity.

Humanity, for better or worse, is a theme in Fox’s work from the tough women of ‘Down Town Los Angeles’ that surrounds him in his daily life in the studio on Skid Row to the history of Europe as a raging colonizing colossus. Fox’s work is informed by both personal and general observations. Many of the new paintings feature prominent female leads like the large canvas ‘The Women Are Angry And We Pretend Not To Know Why’. Many of the men in Fox’s paintings are riding horses, this beautiful potent creature that has carried man to victory and grave. In ‘No Reward Unpunished’ two riders are galloping for the Guinness. The men often have an empathetic tragic feel in Fox’s work, while the women feel empowered and secure. Tragedy and genocide are translated into beautiful fragmented abstraction in the two large red paintings ‘Eraser (Leopold In The Congo)’ and ‘Rubber (Leopold In The Congo)’. Danny Fox’s works are compelling, they engage you in conversation, they seem both urgent, personal and universal. The paintings are bold and brave while equally fragile and wry. On a tightrope between greatness and elegant disaster.

Danny Fox was born 1986 in St Ives, England, and currently lives and works in Los Angeles. The artist is self-taught or as he states it; “Sat there and went for it,” starting to express himself first on paper in his mid teens. Fox has recently exhibited at S/2 Sotheby’s in Los Angeles (2016) and New York (2016) and Redfern Gallery in London (2015), followed now by his very first solo exhibition in Denmark at V1 Gallery.

A new publication was created on the occasion of ‘A Spoon With The Bread Knife’.

Make sure to catch ‘A Spoon With The Bread Knife’ before it closes on the 14th of January. V1 Gallery is located at Flæsketorvet 69 in Copenhagen, Denmark. It is opened Wednesday until Saturday 12:00 — 18:00 (Saturday 16:00).

For more information and work by Danny Fox see here