“What art does — maybe what it does most completely — is tell us, make us feel that what we think we know, we don’t. There are whole worlds around us that we’ve never glimpsed.” Greil Marcus — Friday July 29th — 13:45 (CEST) — 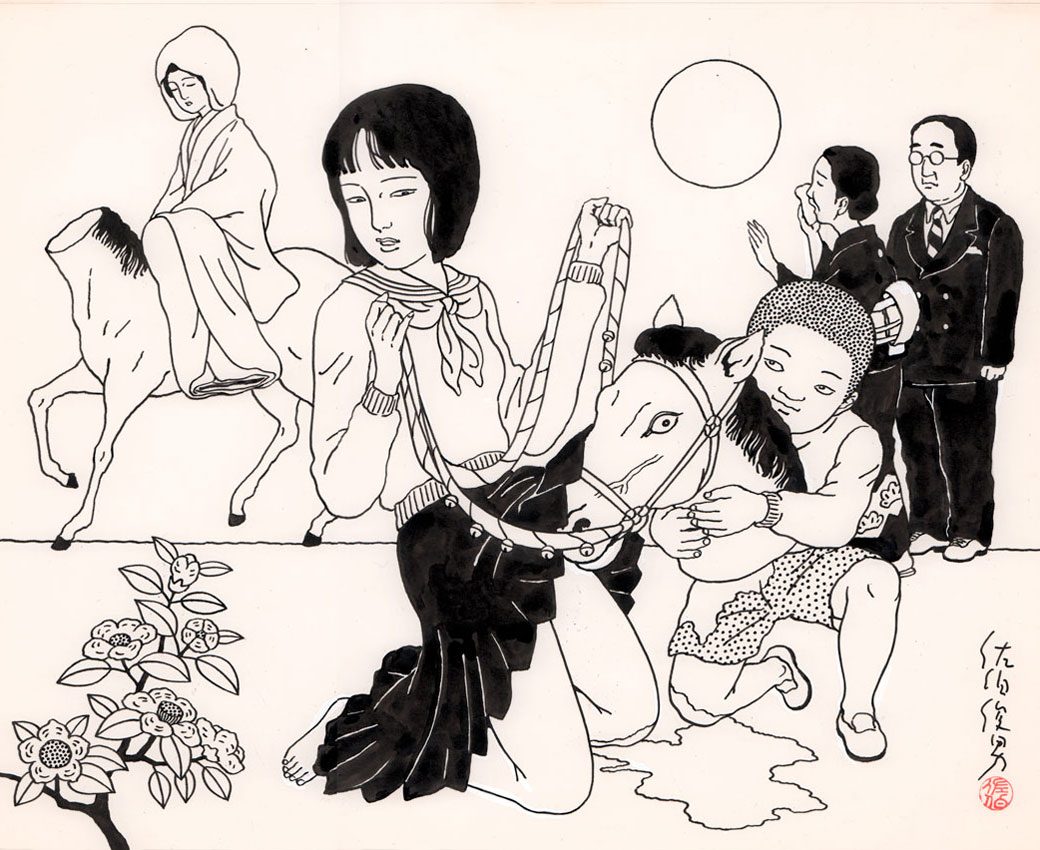 We are catching on at the very last moment, but the super exciting second Canadian exhibition of work by ‘The Godfather of Japanese Eroticism’ Toshio Saeki will run for one more day at the Toronto-based Narwhal gallery. Presented in the successor of the 2014 debut exhibition of Saeki’s work, which took place in the same location, are original ink drawings from 1972 to the present, including three new original drawings exclusively for this exhibition. As part of the exhibition Saeki has recreated one of his most famous scenes and recolored it to create ‘Ureshidaruma’, an edition of 100 silkscreen prints available only through Narwhal (and online here). Saeki’s artwork draws from the basement of a collective subconscious, depicting universal taboos through surreal narratives and dark humor. Filtering imagery from his photographic memory and childhood experiences through imagination and dreams, Saeki splits open a universally erotic world where iconic characters subject themselves to grotesque behaviors staged within traditional Japanese environments.

Accessing the traditional Japanese partnership employed by the Ukioy-e woodcut masters, Saeki creates his original works as black and white ink drawings which he then overlays with vellum sheets hand marked with color plans for the visualized finished image. As an “eshi” (artist) he passes his designs to a “surishi” (printer) and they are developed into the final work. Saeki refers to his method of practice as Chinto printing. Through harmonizing provocative contemporary imagery with traditional Japanese culture, Saeki’s work transcends time, weaving fantastically grotesque and abstract narratives that are at once are at once highly unsettling yet remarkably alluring.

Saeki speaking to Dazed on his work:

Leave other people to draw seemingly beautiful flowers that bloom within a nice, pleasant-looking scenery. I try instead to capture the vivid flowers that sometimes hide and sometimes grow within a shameless, immoral and horrifying dream.

Born in 1945 in Miyazaki, Japan, Saeki gained notoriety in the 1970’s for his avant garde approach, connecting traditional Japanese art styles such as Shunga (erotica) and Yokaiga (mythology) with postmodern radical pop art culture. Over the past 40 years Saeki has developed a dedicated cult following, which continues to expand. Saeki has had solo exhibitions in Japan, Paris, London, Tel Aviv, New York and San Francisco. Over a dozen publications of his collected works have been printed including ‘Saeki Toshio Gashu, Akai-hako’ (Red Box), ‘Chimushi I’, and ‘Chimushi II’, ‘Yume Manji’ (Dream Swastika) and ‘Onikage’. Celebrated cross culturally, Saeki has also been immortalized in the Ju-on horror films which play homage to his child spirit and has contributed album artwork for several international musicians including John Lennon and Yoko Ono. He presently lives and works in the small town of Ichihara, Chiba, Japan.

When somewhere around Toronto, make sure not to miss this!