“What art does — maybe what it does most completely — is tell us, make us feel that what we think we know, we don’t. There are whole worlds around us that we’ve never glimpsed.” Greil Marcus — Thursday July 27th — 17:36 (CEST) — 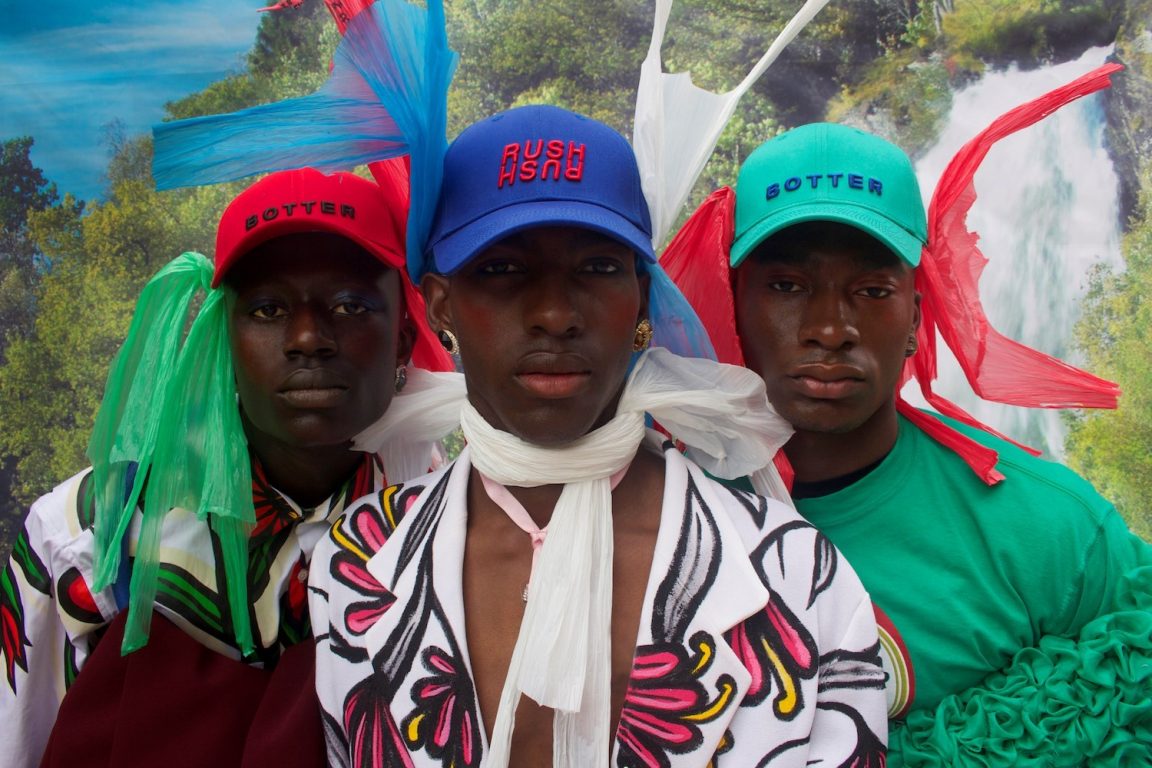 There is a significant need for new personal stories in today’s hype-driven, free-for-all fashion world. And despite a rather boring tradition in that realm, some of the names we find interesting and have the potential to do just that c0me from The Netherlands. Following the likes of Paul Helbers and Sebastiaan Pieter, who both are talented Dutch designers with young labels (based outside of The Netherlands), last month’s Royal Academy of Antwerp graduate Rushemy Botter seems to be next in line to step up. His graduation collection (Autumn/Winter 2018) named ‘Fish or Fight’ formed Botter’s debut during last week’s Amsterdam Fashion Week, but we already seized the opportunity to briefly meet the rising star one day after his graduation show in Antwerp at the beginning of June.

As his family, some friends and creative (and romantic) partner Lisi Herrebrugh helped him dismantle and remove the installation for his final academy presentation — big wooden panels boasting the same tropical illustrations by his friend Iwan Smit that were also part of the collection — we sat down with Rushemy, who turned out to be a very friendly, down-to-earth, yet very ambitious young man with significant dreams. A person who’s not afraid to get his hands dirty, having had to work hard to get where he is today, but with great excitement for what’s still to come. Despite that it will continue to be very hard work from this moment on.

The fact that he won the remarkable number of five graduation prizes (among which are the Dries van Noten and Ann Demeulemeester accolade) probably also still resonated in his high spirits. Rushemy shared with us that before having found his love for fashion, he was in the military for a while. When he came to Antwerp four years ago, he had already finished a technical fashion education in The Netherlands, where he discovered his ambition to have his own label one day. And despite what he felt at the time when he started his studies in Antwerp: he knows now that he wouldn’t have grown into a designer who is able to tell the stories that are only his own without the academy. Now he is ready to take on the world.

Having been part of a large group of international fellow students (18 Master graduates in total!), clearly proved to be a fruitful environment to discover his personal vision. Yet, when we critically observed the collections of the other graduates in his year, few (or maybe none) have been able to distill a personal voice combined with a certain societal relevance into their creations quite as striking as Rushemy did with his collection. In the current fashion environment a lot of the young designers not strictly focus on the education that is at hand at a certain academy, but also consciously seem to position themselves on the ever-growing platform of that particular institute as a direct stepping stone to start a label while the international limelight of graduation is still upon them. Which, obviously, isn’t necessarily the right moment to start for everyone, but with a new class stepping up every year, the association with the school’s platform will fade even quicker than it came to life.

Rushemy stepped into that limelight already last year, when he took the stage with his third year collection presentation in Antwerp, which left a deep impression when we witnessed it. Subsequently — assisted by the ‘viral proof intervention‘ of Young Thug during the VFILES presentation of the same collection at New York Fashion Week a month later — Rushemy’s creations with a militaristic aesthetic worn by an army of dark-skinned models, showed Mongrel Mob inspired motorcycle gang references and presented a clear activist message, which gathered him worldwide attention. For some, those driven by the holy grail of visibility instead of significant ideas, this moment of fame would probably have been enough to search for more of the same from that moment on.

Instead, Rushemy returned to Antwerp to actually finish his education and, together with Herrebrugh, started working on his final farewell to Walter van Beirendonck & co, which would also mean his final presentation to the world on the academy stage in Antwerp. It resulted in a search for new layers of depth in his work, partly based on all of these interesting experiences in the fashion world outside of Antwerp, but also through a new level of narrativity. He found his inspiration on Curaçao, a former Dutch island colony in the Caribbean, where his families’ roots lay.

Rushemy translated his point of view into rich aesthetic elements (big suits, big accessories) and a strong activist narrative (degenerate corporate logos, Nike Air VaporMax glued on leather shoes) in the collection, which are as much about him as an individual as a fashion designer trying to create interesting form. Making the new collection a remarkable step forward, setting him apart from most of his peers. Coincidentally (or maybe not) Curaçao also forms the subject-matter in the work of our other big favorite art academy graduate of this year: photographer Gilleam Trapenberg. (More on his work in the near future.) As the Dutch multi-ethnicity debate has always been very rigid, with mostly an us (autochtoon) versus them (allochtoon) framework at work: the fact that second and third generation immigrants are bringing new sophisticated perspectives into this discours is something we really appreciate and feel is deeply needed in times of polarization. The fact that Rushemy (and Trapenberg for that matter) succeeds incredibly to implement these deeply personal matters into his creations underlines an extraordinary talent that is needed more than ever and without a doubt promises great things in the future to come.

Rushemy on what inspired him for his graduation collection:

I have a diary that I always keep with me and since I spent my downtime after last year’s show in the Carribean, it dawned on me pretty quickly that I wanted my Master’s collection to be an ode to Curaçao, where my family is from. I am always inspired by its people. Whether I am at home or traveling, I can often pick out of the crowd who’s from Curaçao or the Dominican Republic. They just dress differently.

I specifically wanted to focus on the cultural clash they experience. A lot of young people come to Europe for what they think and hope will be a better life, but adapting or fitting in is very difficult and oftentimes they end up in trouble. In The Netherlands, for instance, it’s fairly easy to take out financial loans, so they get into debt and fall into this pattern of not being able to keep up with society. Clothing and appearance become sort of an armour to look like you’re better-off than you actually are. That way of dressing, putting on expensive outfits when you actually don’t have much, is what intrigued me.

Right after the show in Antwerp, Rushemy and Lisi travelled to London and subsequently to Paris to set up a showroom there. Amongst other people, following their Instagram accounts, they hung out with the Daily Paper crew, which seems to be an interesting umfeld to be around as the label needs to serve its purpose commercially beyond just interesting ideas in the future too. And also the beautiful lookbook for ‘Fish or Fight’, which was released last week, was done in collaboration with some very like-minded souls: with styling done by Ib Kamara and the photography coming from the hands of Ruth Ossai.

We can’t wait what’s in store for Rushemy, Lisi and the Botter label, but we’ll make sure to follow it firsthand. As long as Rushemy stays true to his own personal story: the world is waiting for it, no doubt.