“What art does — maybe what it does most completely — is tell us, make us feel that what we think we know, we don’t. There are whole worlds around us that we’ve never glimpsed.” Greil Marcus — Tuesday April 11th — 7:44 (CEST) —

I love listening. It is one of the only spaces where you can be still and moved at the same time. — Nayyirah Waheed — Tuesday April 11th — 7:44 (CEST) — 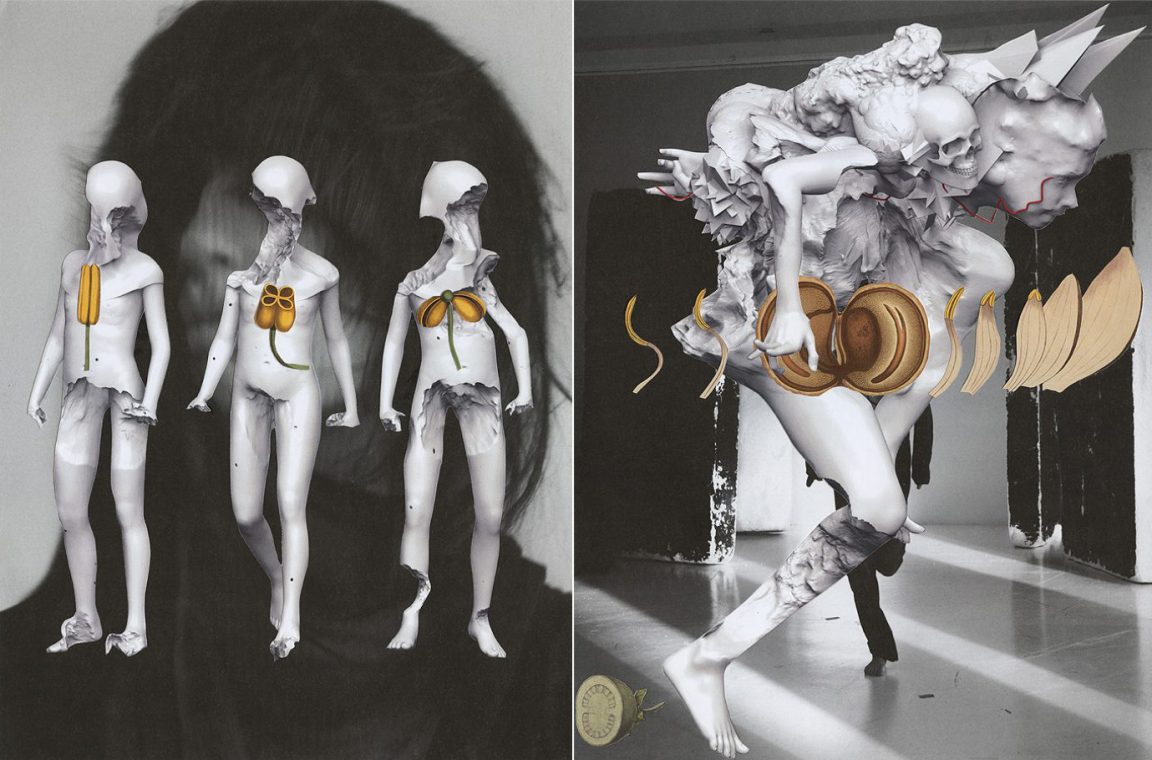 We have been big fans of the work of Norway-based Iranian collage artist Ashkan Honarvar since his graduation days at the HKU University of the Arts in 2007. In the decade that followed, he has been steadily producing series after series on an extraordinary high level, dealing with reoccurring themes like colonialism, war, mass destruction, megalomania and other grotesque behavior. Always succeeding in creating imagery that is both intelligent and haunting, slightly repulsive but always captivating. In March of this year Ashkan presented another highly ambitious series of eight chapters named ‘The Red Forest’ that he has been releasing over the course of different weeks.

Within the new body of work, all of the different subseries touch the same (‘Honarvar signature’) aesthetic atmosphere and share the same underlying technique, but every chapter has its unique elements, telling different segments of the narrative. And although every chapter complements the strong emotion of the overarching concept, our favorite out of the body being the sixth, as shared below. The story behind ‘The Red Forest’ is based on the first seven years of Ashkan’s life, growing up in Iran during the Iran-Iraq war, which at first sight suggests it is one of the most personal series till date. Yet the seamless fit of the series within the signature running through his portfolio, probably tells how personal his work always is, despite it referring to subjects that are much looser connected to the artist own history. One element within ‘The Red Forest’ that is a novelty is Ashkan’s use of 3D renders, with the skulls and human figures (the female figure is Norwegian model Malena Morgwen) in this project, made with a 3D application Zbrush and then printed out and, as per usual, finished with handmade collage.

Both the subject-matter (as a point of reference for all of Ashkan’s work) and this new layer of depth in the disfigurations of human representations, grabs us by the throat a little stronger than ever before, making ‘The Red Forest’ a significant development and possible important new chapter within the evolution of the brutally talented Ashkan Honarvar. Leaving us waiting eagerly where he will take these new artistic facets in the future..

Honarvar´s collages speak to humanity´s intrinsic obliviousness, heightened by vanity and abused by others. We think we know ourselves and the world around us, but how much do we really understand? Just as Honarvar´s figures are obliterated, severed, and reorganized by him, we are often at the mercy of circumstances outside our control. Ignorance of our places in the world can impair our abilities to deal with these unique circumstances.

Ashkan Honarvar has been producing collages for over a decade, both under his own name as the pseudonym Who Killed Mickey, always finding inspiration in the dark side of humanity and from the questions that rise about it. All of the incredibly talented artist’s art deals with the darker sides of the human mind through the undeniable and unavoidable beauty of the human body. By dissecting and rearranging images with careful aesthetic vision, Honarvar creates work with an intriguing macabre darkness. Since his graduation from the HKU University of the Arts in our hometown Utrecht in 2007, Ashkan has been producing a steady evolving body of work, now a days living and working in Norway. His work was exhibited all over the world in solo- and group exhibitions in places like Trondheim, Los Angeles, Turin, Ottawa, Berlin, New York, Lima and Amsterdam, amongst others. It was published in numerous prestigious international titles like Vogue, 032c and Sleek, but was also included in both editions of ‘The Age of Collage’ book.

Ashkan Honarvar is represented by Steven Kasher Gallery for his fine art work. For his commercial work he is being represented by Mulitply Illustration Agency since the beginning of this year.