“What art does — maybe what it does most completely — is tell us, make us feel that what we think we know, we don’t. There are whole worlds around us that we’ve never glimpsed.” Greil Marcus — Monday November 21st — 10:44 (CET) —

I love listening. It is one of the only spaces where you can be still and moved at the same time. — Nayyirah Waheed — Monday November 21st — 10:44 (CET) — 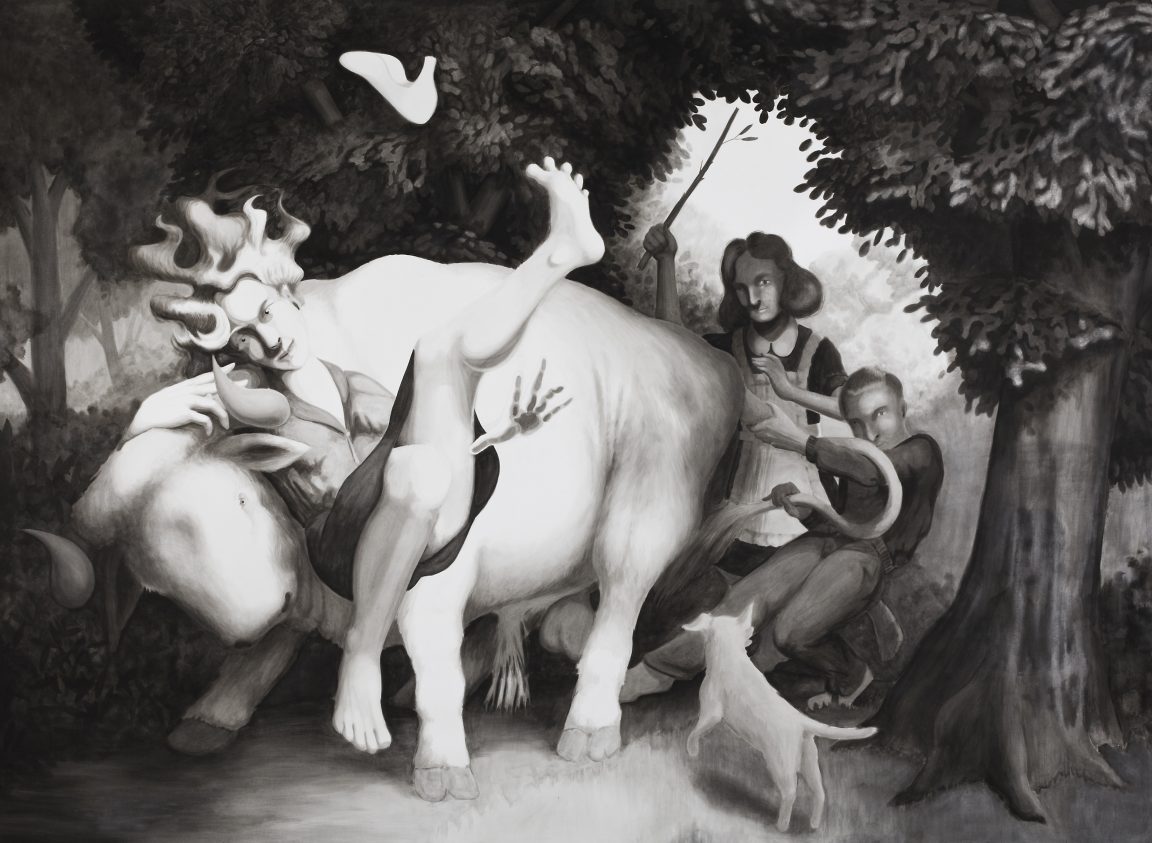 Last Friday, the doors of the beautiful Capital C building in Amsterdam have opened for BIG ART. The new initiative of curator Anne van der Zwaag presenting over 50 XL artworks by contemporary artists and designers, running until the 27th of November in what used to be the Diamant Exchange of the city. A unique mix of acclaimed names and upcoming talents, monumental paintings, drawings, large sculptures, big photos and huge installations. As one of the official partners of BIG ART we will present some of our favorite artists included in the curation of van der Zwaag. Today, we focus on a longtime favorite of ours: Amsterdam-based artist Marijn Akkermans, with whom we talked about the development in his work after graduating from the art academy 15 years ago, the pressures of modern society and the installation-like presentation of his incredible work at BIG ART.

When did you start painting?

I started at the art academy in Arnhem. There I studied fine arts and actually started with painting and drawing, but refocussed on photography. It was only at the end of my studyperiod in Arnhem that I went back to drawing, which I then continued at DAI, a then called second phase education in Enschede, now Masters, in Arnhem. Where I, more or less, started to create work as I have been doing for the last 15 years.

Drawing has always been very natural for me. Although it may not have been very serious, I’ve tried photography, performance, and other experiments at the academy. That was very enlightening to do, but I never found what I find in drawing. Eventually, a few years ago, about ten years after I graduated, I started a new period of experimenting, this time in drawing, without knowing what the outcome would be. At that point I thought: drawing has always been so self-evident to me, but did I really explore my full potential already? That’s why I had to shake up my complete way of seeing things, this time within the medium itself.

What was that moment when you needed to shake things up again?

I felt that I had brought something to an end: in the content and aesthetically. It all came together quite nicely, after which I couldn’t get around the question: “what next?.” It felt like I had completed a stage.

That’s when color appeared in your work?

Did that moment of artistic reflection, after having worked for ten years, indicate a certain emancipatory development as an artist?

Maybe. Immediately after my graduation, I started a half year residency in Germany. Through this project, I found a gallery in Munich, quickly followed by Cologne and Amsterdam. That happened quite fast and at one point I felt thrown back upon myself again. I needed a standstill after those years of demanding commitments to be able to see what new direction to take. Even though it was very comforting to know that the work I created would end somewhere outside of my studio, in an exhibition and that I could have an exchange about it, but I just wanted to break out of that system for a while.

Looking at the context of today and 15 years ago, some radical changes occurred with regards to visual culture and how it is perceived. In an older interview I read that ‘heroism’, or the social roles people play and the associated social construct of glorifying another person, is a prominent theme in your work. In my eyes, fame is one of those things that underwent a tremendous democratization because of the internet. Is that something you reflect on in your work?

It is indeed a recurring theme in my work, but I see it specifically from the psychological point of view how children relate to their parents, and how one later on relates to the world. I try to establish a line between past and present in my work. And I think that we adults are actually more child-like and less sensible than we think or hope that we are. I can take-on a formal attitude of course, but what are our real motives behind the way we act? I have mentioned ‘heroism’ before, and it is obviously an important theme in my work, but at the same time, to pinpoint it like that, is something I struggle with because it creates a fixed meaning which shouldn’t be attached to it. If I zoom out to a meta-level and think about my work too much, I lose contact with drawing itself.

Already in the last ten years I experienced quite a big difference between my generation and the current one. The new generation has pixels running through their veins. I don’t. When I was in art school, I attended a separate Photoshop course in the graphic design department, because it wasn’t part of the fine arts curriculum. I was not really good at it, but it was a good introduction. At that time the first computers were just introduced in the classrooms.

Will ‘slow-art’ survive? I feel that slowness is an integral part of life, but will others feel the same in the future..

And now, 15 years later, computers have become the elementary tool within our visual culture. Even for painters; maybe not in the actual work they do, but for many all the phases before the painting process have some digital influence. That must have had some effect?

I think for people like myself, who work in a slow medium like drawing or painting, within the current context of communication which operates at tremendous speed, carries immense amounts of information and causing a much shorter attention span of people – makes me question its effect. Will ‘slow-art’ survive? I feel that slowness is an integral part of life, but will others feel the same in the future..

How do you begin a drawing?

Sometimes I just start drawing. Other times I have photographs, film stills or other works of art as inspiration. I start with simple sketches that subsequently remain untouched for a while, until at some point I will pick it up and work it out.

When is a work finished?

That’s a feeling. I just know.

Are you still occupied with finding inspiration or are you just expressing yourself from a certain point as an artist?

No, I think it still coincides. There is no other way. You still need both. I work on an intuitive level. When I draw, I have to be in an intuitive state. Lose the impulses of my context in order to create. I underwent an intrinsic personal and artistic development in the last 15 years, but I still feel that it’s a very viable field to explore deeper – inconceivable contingencies that shape us. I follow the news and I follow today’s context, but I do not connect it directly to my drawings. That doesn’t work for me. When things are too pragmatic, I can not draw anymore. Something has to happen in the act of drawing itself, on that intuitive level.

When things are too pragmatic, I can not draw anymore. Something has to happen in the act of drawing itself, on that intuitive level.

What kind of work do you present at BIG ART?

At BIG ART I will show my work in a small room with one exterior wall directed at the larger exhibition space. This time my drawings will be presented installation-like instead of individually. It is a combination of new and existing work, that will hang abutting each other, creating more emphasis on the total experience. You could also switch the individual drawings, there’s a certain randomness in it. Personally, as an artist I feel that I’m subject to a lot of pressure. You have to define your framing at all times: this is what you do as an artist, this is what your work stands for. With the presentation at BIG ART, I want to break away from this system, because I feel that it’s just not feasible. It is inhumane, almost.

I recently had a discussion with one of the curators of the residency project in Germany that I did years ago. In it we talked about blind spots. That’s something I always encounter at some point in my working-process: things I can not see, which other people can, and therefore probably understand better. There are always things you can not see in life. As a person you just have to deal with that, make peace with it. That goes far beyond the algorithms that determine many things now. All of a sudden everyone has become very mathematical, I feel, believing that everything is explainable and traceable. There will always be blind spots, things we can not explain. I think it will always remain this way.

There will always be blind spots, things we can not explain. I think it will always remain this way.

Freud wrote an essay in 1927 in which he states that ‘we’ have to be careful that “the people” do not find out that God does not exist. The intellectual elite, who already had accepted fact, feared that there would be chaos if it would happen. Then Hollywood arose as a religious substitute, followed by television, the internet and now, for instance, vloggers for the kids to idolize. I guess, this development in one form or another will continue in the future. We still can’t bear reality.

We can’t wait to see where you will take your work in the future. The work at BIG ART promises a lot.

All images courtesy of the artist.

For all information and work by Marijn Akkermans here

BIG ART will take place until the 27th of November in the iconic Capital C building located in the Diamantbeurs, Weesperplein 4 in Amsterdam.

For all information on BIG ART see here