“What art does — maybe what it does most completely — is tell us, make us feel that what we think we know, we don’t. There are whole worlds around us that we’ve never glimpsed.” Greil Marcus — Wednesday May 11th — 16:02 (CEST) — 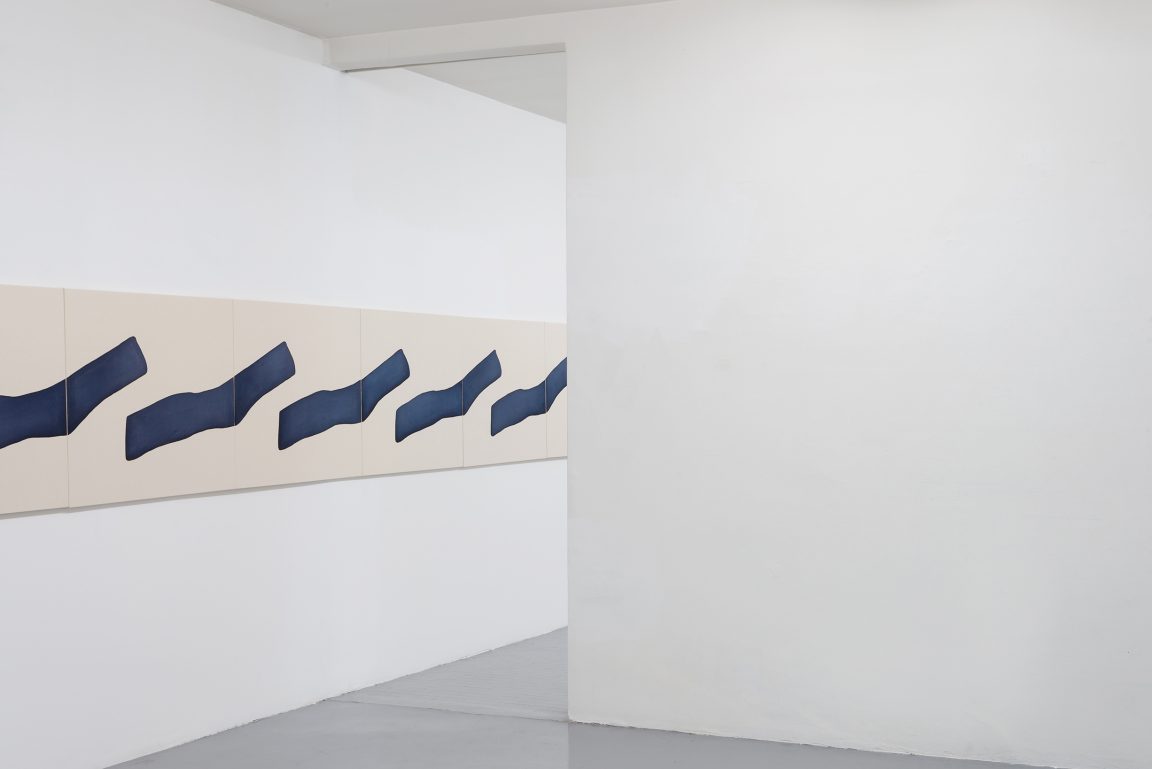 We first discovered the incredible work of New York City-based artist Landon Metz when he had created the cover for the fourth issue of The White Review in 2012. In the same year we sold his ‘Painter Painting Surface‘ publication in the Another Shop and have ever since followed his development step by step. Looking back four years ago and seeing the recent work Metz created for exhibitions in New York City, Brescia and Milan shows a new direction in his creative vision which we really appreciate. From the very beginning Metz has been creating biomorphic forms splayed across, in the earlier years often times eclectic and overlaying, which slowly moved towards more abstract shapes.

Recently, and especially for the shows in Italy, his flat work has progressed to a new place that remarkably extends and redefines his already significant achievement. In his latest three series Metz isolated forms from earlier works, which he blows up to an epic scale and executes as large-scale monochromes, having irregular stretchers specially fabricated and thinking to an unprecedented degree about their display in relation to the architecture of the exhibition space. For his two recent shows in Italy he even took his forms beyond just the wall and materialized the shapes into sculptures placed on the floor and the ceiling of the exhibition space. The new direction shows the artist’ remarkable focus and dedication to investigate the scope and depth of his unique artistic vision, in our eyes putting himself in one league with some of the most interesting abstract artists working today (and in the past for that matter). We can’t wait to see where the artist will take this in the near future.

For the duo-show that closed on the 9th of April at the renown Paul Kasmin Gallery in New York City, Metz specifically explored his affinity for the work of Color Field painter Morris Louis, one of the movement’s central figures. At the gallery, Louis’s 1958 painting ‘Tzadik’ is exhibited alongside an installation by Metz. With his recent development into the sculptural, Metz placed the three-dimensional paintings in direct response to the gallery’s existing glass façade. Their scale, color, abstraction, and judicious amount of raw canvas reveal how this emerging artist confronts the past to find his own originality. It placed Metz directly within the discourse of the Color Field movement and shows the historical contextual relevance of the work he creates today. For his two shows in Italy the artist took predominantly to the sculptural and positioned his creations directly into the space, making these two most recent shows a tour de force of his signature visual language in its grandest form till date in the career of the artist.

We are super inspired by Metz’ new level of emphasization on form, reaching a new level of (touchible) abstractization, making the artist one of our favorites undisputed working today.

Landon in a conversation with Sight Unseen:

I consider myself to be an artist, working with the vocabularies of painting, sculpture, installation, and even performance. The distinction for me is found in the desire, or lack thereof, to find resolution in the historical baggage that painting carries. I’m aware of the complications of the medium and I see this more as a performative tool than a narrative to find new value in. I find historical precedence and the surrounding culture to be raw material in its own right.

Landon Metz is a visual artist who was born in Phoenix, Arizona  1985, living in New York City, by way of Los Angeles where he studied at Art Center College of Design. Metz works in a variety of media creating abstract visuals and soundscapes as a painter, sculptor, photographer, and filmmaker. His work is concerned with an elevated consciousness he believes to be synonymous with a state of “no mind” and addresses the non-dual nature of the universe there within. He has had several gallery and museum exhibitions, including at the Sean Kelly Gallery, James Fuentes, oh oh oh oh oh oh oh Gallery and the mentioned Paul Kasmin Gallery in New York Citty next to the Milan and Brescia-based Galleria Minini.

Make sure to follow the very talented Landon Metz here