“What art does — maybe what it does most completely — is tell us, make us feel that what we think we know, we don’t. There are whole worlds around us that we’ve never glimpsed.” Greil Marcus — Wednesday March 29th — 9:12 (CEST) — 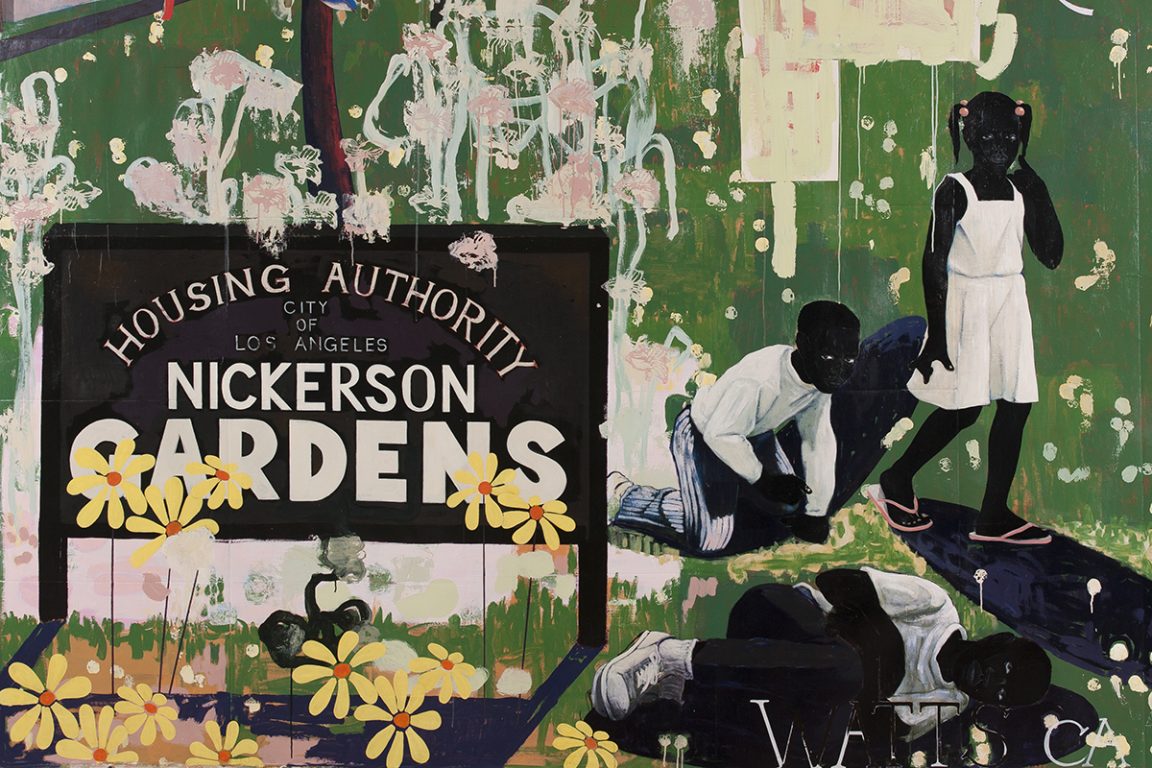 After it was first presented to the world at the MCA Chicago and The Metropolitan Museum of Art in New York City last year, two weeks ago the MOCA in Los Angeles opened the tremendously exciting 35-year retrospective of one of our favorite painters working today: Kerry James Marshall. Marshall’s figurative paintings have been unparalleled in their consistent portrayal of African American culture and history. The now nearly 600 years of painting in America contains remarkably few African American painters and even fewer representations of black people. Marshall —being a child of the civil rights era— set out to redress this absence from the moment he consciously picked up his paintbrush, inspired by one of his personal heroes: social realist painter Charles White. ‘Kerry James Marshall: Mastry’ is the artist’s first major retrospective in the United States, containing nearly 80 paintings, all of which contain images of Black subjects going about their daily business, presented with utter equality and humanity. A deeply accomplished artist, who makes ravishing paintings, Marshall’s strategy was three fold.

First, as a young artist he decided to paint only black figures. He was unequivocal in his pursuit of black beauty. His figures are an unapologetic ebony black, and they occupy the paintings with a sense of authority and belonging. Second, Marshall worked to make a wide variety of images populated with black people. This led him to make exquisite portraits, lush landscape paintings, everyday domestic interiors, and paintings that depict historical events, all featuring black subjects as if their activities were completely and utterly normal. Third, Marshall concentrated on painterly mastery as a fundamental strategy. By mastering the art of representational and figurative painting, during a period when neither was in vogue, Marshall produced a body of work that bestows beauty and dignity where it had long been denied. Both on the individual level of Marshall’s extraordinary unique artistic vision and today’s context granting an ever-growing relevance to his body of work: making that when you are somewhere near Los Angeles, there is no reason whatsoever to miss this incredibly relevant exhibition!

You can’t be born in Birmingham, Alabama, in 1955 and grow up in South Central near the Black Panthers headquarters, and not feel like you’ve got some kind of social responsibility. You can’t move to Watts in 1963 and not speak about it. That determined a lot of where my work was going to go…

The exhibition will unfold in chronological order, allowing the viewer to trace the development of Marshall as a painter. The exhibition also charts our nation’s evolving ideas and attitudes towards race, beginning with a an exploration of Ralph Ellison’s classic novel ‘Invisible Man’, which explores the lack of legibility of African Americans in the culture at large, to a suite of paintings dedicated to the exploration of Black love, to portraits of members of the Cato slave rebellion, and culminating in paintings made during the Obama presidency, which feature a stunning set of portraits of black artists at work in their studios. The exhibition catalogue, edited by MOCA Chief Curator Helen Molesworth, chronicles Marshall’s career and contains sumptuous color plates of all of the works in the exhibition. It is the most authoritative book on the artist’s work to date.

Kerry James Marshall (the first person in his family to go to college), graduated from Los Angeles City College and subsequently graduated from Otis College of Art in 1978, after which he started his prolific career. In all of Marshall’s work he challenges the marginalization of African Americans through his formally rigorous paintings, drawings, videos, and installations, whose central protagonists are always, in his words, “unequivocally, emphatically black.” Marshall’s erudite knowledge of art history and black folk art structures his compositions; he mines black culture and stereotypes for his unflinching subject matter. His complex and multilayered portrayals of youths, interiors, nudes, housing estate gardens, land- and seascapes synthesize different traditions and genres, while seeking to counter stereotypical representations of black people in society. Marshall also produces drawings in the style of comic books, sculptural installations, photography, and video. As with his paintings, these works accumulate various stylistic influences to address the historiography of black art, while at the same time drawing attention to the fact that they are not inherently partisan because their subjects are black.

The artist has exhibited widely throughout Europe and the United States since the late 1970s and early 1980s. In 2015, he created a large-scale mural specifically for the High Line, marking the artist’s first public commission in New York. Titled ‘Above the Line’, the mural was based on a previous composition from his cartoon strip RHYTMN MASTR, which belongs to his Dailies series. In 2013, his work was the subject of a major survey entitled Kerry James Marshall: Painting and Other Stuff. The exhibition was first on view at the Museum van Hedendaagse Kunst Antwerpen in Antwerp. In 2014, it traveled to the Kunsthal Charlottenborg in Copenhagen, and was co-hosted by two venues in Spain, the Fundació Antoni Tàpies in Barcelona and the Museo Nacional Centro de Arte Reina Sofía in Madrid.

For all info on ‘Kerry James Marshall: Mastry’ see here