“What art does — maybe what it does most completely — is tell us, make us feel that what we think we know, we don’t. There are whole worlds around us that we’ve never glimpsed.” Greil Marcus — Friday September 23rd — 14:12 (CEST) —

I love listening. It is one of the only spaces where you can be still and moved at the same time. — Nayyirah Waheed — Friday September 23rd — 14:12 (CEST) — 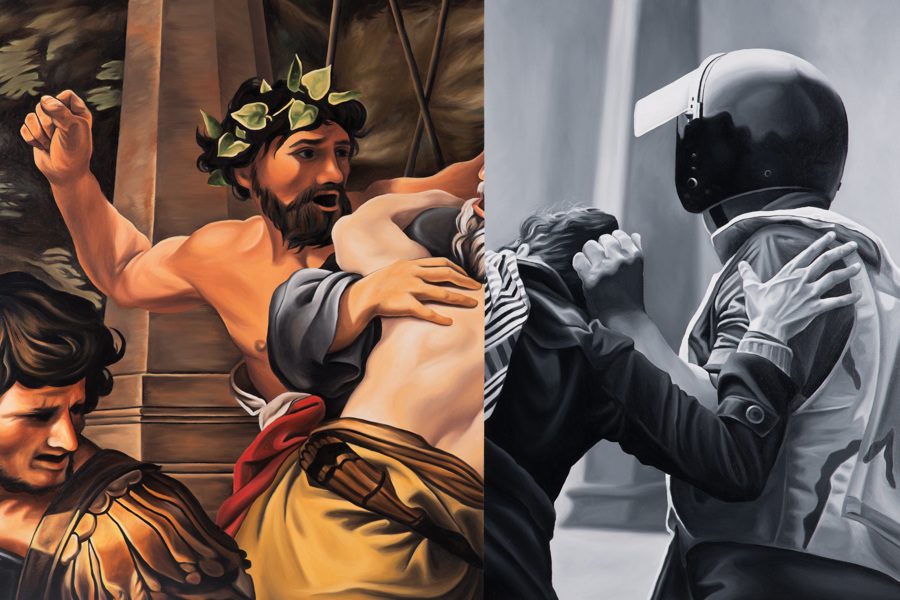 On the 14th of October, New York City-based Brilliant Champions Gallery will present ‘THE ECHO’S DECAY’, which will be already the fifth solo exhibition in New York by American painter Jake Scharbach, whose incredible work we only recently discovered. ‘THE ECHO’S DECAY’ includes a selection of recent paintings representative of the artist’s richly complex content and visual imagery — bringing together an eye-pleasing modern color palette, oftenly the juxtapositioning of remarkable iconic imagery in diptychs, portrayed in a realist style infused with an intrinsic pop cultural dimension.

In Scharbach’s works society is under thorough scrutiny as he raises unexpected comparisons that span the millennia of Western civilization. Finding thought-provoking parallels in icons of civilization that at times are separated by more than 2000 years of human history. Scharbach sees his subject matter as an echo. A reverberating sound. A repeated pattern steadily diminishing, raising one particular question in our minds: what intrinsic progress has been made over all those years in which possibly only the facade of civilization has changed its shape. The painter looks at recurring themes of violence and historical artifacts from past empires, drawing clear parallels between civilization’s decline and the imminent decay of an echo.

Scharbach thinks and works in the midst of disillusionment. However, the result of his relentless searching and questioning is a much-needed opportunity for the critical thinker in us all to examine our mounting anxieties for the future and to reassess that which we value in this life.

Scharbach comes from a small town in Washington State, a close-knit community. Cabin hand-built by his father, clothes sewn by his mother, and kerosene lanterns instead of electricity. The environment of his youth shaped his views on human connection—a connection, he says, that modern-day society is lacking. The artist’s good friend Francisco Peralta says it perfectly:

If you carry with you endless hours of rain, wind, wet earth, dead time, there’s a possibility that you will become suspicious of civilization and dedicate yourself to creating images that corrode and subvert it.

Jake Scharbach earned his Bachelor of Fine Arts at Pacific Northwest College of Art. His most recent solo exhibitions include MAC Quinta Normal (Santiago, Chile), and Microscope Gallery (NY). He has been exhibited at numerous other locations including the Brooklyn Art Museum, the Armory Show, Vala Gallery (Santiago, Chile), Court Square Studios (NY), and Kokoothe Art Space (OH). He has been awarded the Royal Nebeker Notable Artist Award as well as the Newport Visual Arts Center Scholarship and the Pacific Northwest College of Art Scholarship.

All imagery courtesy of Brilliant Champions Gallery and the artist.

Brilliant Champions Gallery is located on 5 Central Ave in Brooklyn, New York City. Opened Tuesday to Saturday from 11:00 until 17:00.

For all information on ‘THE ECHO’S DECAY’ see here