“What art does — maybe what it does most completely — is tell us, make us feel that what we think we know, we don’t. There are whole worlds around us that we’ve never glimpsed.” Greil Marcus — Wednesday September 4th — 11:32 (CEST) — 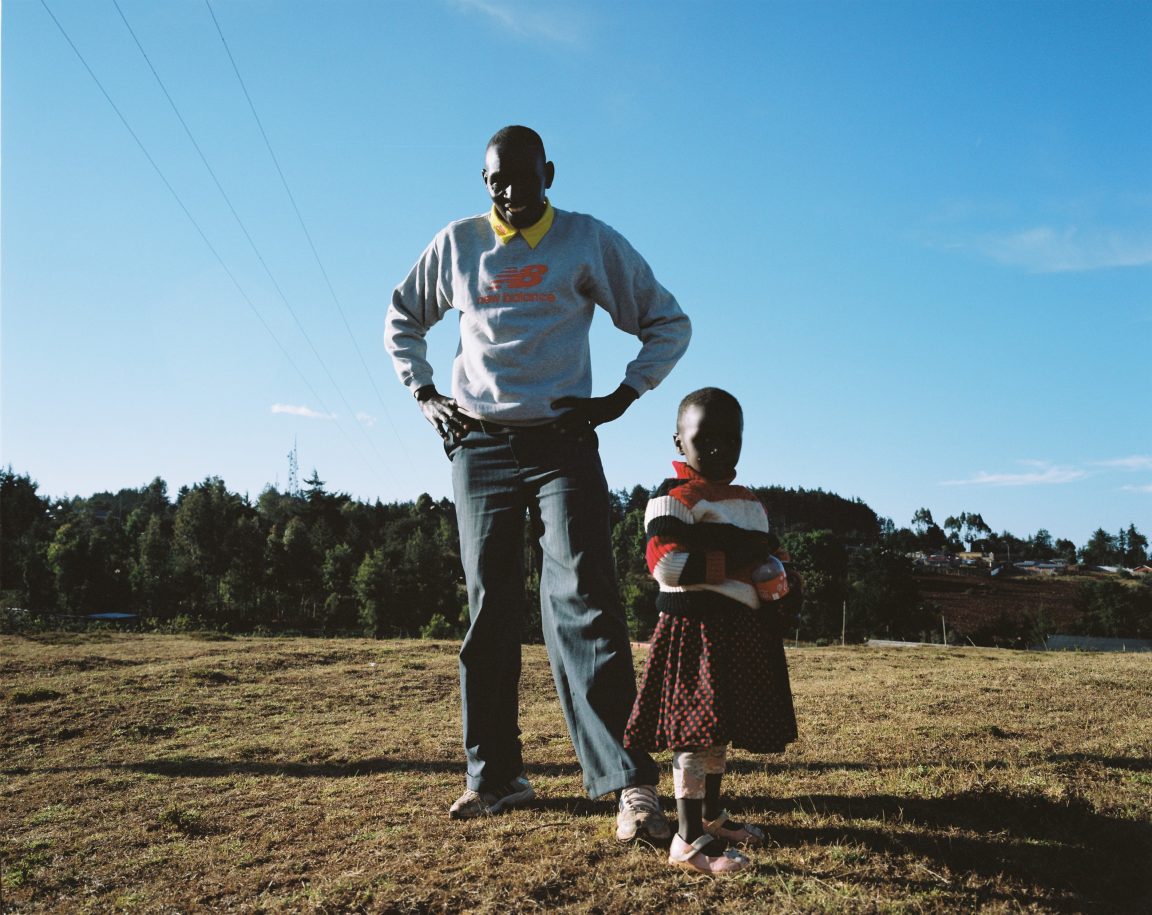 As my focus is shifting towards running (while training for my first ultra marathon), my colleague Thomas showed me the Distance shops in Paris and Lyon and got totally hooked by what they do, the brands they cary and the projects they initiate. One of these projects is The Distance Book Series by photographer and artistic director Thibaut Grevet with the aim to produce a singular vision of some of the world’s most emblematic places related to running and its culture. The first volume of this collection is devoted to the mythical village of Iten in Kenya.
Guided by Jean-François Pontier, national coach at the French Athletics Federation, the Distance team traveled in and around this village in the Rift Valley, which has been dubbed the ‘land of champions’ for being the birth and training site of dozens of gold medalists at World Championships and the Olympics. The 170 pages of the book ITEN compile authentic photographs, a fascinating interview with the legendary coach of St. Patrick’s High School, Brother Colm, and unforgettable memories cultivated with local figures, experienced athletes, and village inhabitants during training sessions, competitions, and daily life.
We asked Yoann Wenger from Distance (and the art director of the book) and Thibaut Grevet to talk a bit more about the project, resulting in this wonderful conversation >

[Make sure to get this first volume of the Distance book series at the Distance shops in Lyon and Paris or online here.]

“…and for the first time in my life while watching theses runners, I kind of saw what it was to really separate the brain from the body.
Watching them running, you can really see that they’re not with us anymore, the mind is in a total pease mode, so focused they look hypnotised. You can really feel it through their eyes.”

Yoann Wenger — Should we start this conversation by saying « Jambo! » ?

Thibaut Grevet — I would rather say « be careful of the mosquitoes », our french’ « Jambo »

YW — Let’s take it back from the beginning, we heard a lot about Iten and Kenya through Guillaume (distance co-founder and friend) and we basically pictured it based on his words but we had almost no clue about what to expect.

TG — I’ve been traveling a lot in Africa, from South Africa, to Uganda to Morocco but Kenya always really fascinated me. Especially because my sister in law used to live there for 15 years. The way Guillaume started to talk about it, this sort of ‘pilgrimage’ to the running mecca, that’s when it really triggered me. I didn’t have that much of expectation apart from the goal of discovering a world I didn’t know. My only fear was maybe the fact that if people like us in Europe know and visit theses places sometimes it means that it has already lost its raw and authentic feel and we did more harm than good by visiting.

YW — It was my first time in Africa, deep Africa, Morocco doesn’t really count. Everybody told us that this land is special when it comes to energies. And honestly it was, I agree, when we started doing iconographic research and saw theses runners blogs, I was scared to find something already too ‘sporty-touristic’.. lucky for us it wasn’t really like that.

TG — As I said, Africa is so rich and each area as a strong character/personality.
That’s why I love this continent. You really have this feeling of travel, to go far from your routine. Morocco count to me though, but I think it’s because you’re too used to it and like it a bit too much!

YW — I mean, yeah, but a completely different vibe… Fast forward to the book process, I thought it would be interesting for people understand how the structure of the book was set. Very linear and very much related to a video sort of narrative because of what you do, you make films. Introducing the place, the characters, then having different rhythms, like training/competing/rest/enjoy… What would be the highlight of ITEN the book for you?

TG — Our goal was really to tell the story of the place as a linear thread. I really wanted to show the place, the reality of it and not just do a documentary of the runners that trained there. It was really about understanding how Iten became what it is now.
In a more artistic vision. I wanted to avoid shooting the same way people love shooting Africa or running in Africa in general. The traditional beautiful sunrise or sunset in theses reddish roads. I wanted to bring something more raw. Feel the motion, feel the emotion, get this raw aspect of the place and understand it. It was definitely all about the location.

YW — It’s not just a beautiful track to go and run. There’s incredible strong human story behind each and every Kenyan runner that you can meet in Iten. That’s what make this place powerful. A town of hopes…
Ok, no more drama, what’s the most memorable story, production-wise that you got from this adventure ?

TG — Most memorable is following a group or runners from night to sunrise – and me on a motorcycle during this 30km run on a destroyed road with 3 cameras around my neck. Sketchy like I like it.

YW — At some point, we were way behind so we won’t be in your frame because you were shooting front, one guy suddenly dropped out of the run, exhausted, left behind, he basically jumped on our bike (so we’re three on the bike at this time which is almost regular in Kenya) asked us to catch up with the group full speed then few meters before jumped out, join back the group like nothing happened.

TG — There’s one thing that really touched me. We were visiting the St Patrick schools with Brother Colm O’Connell – incredible – and he explained us how running helps woman to find their place in the Kenyan society. How running and athletics helped them emancipate and be seen in a completely different way from the rest of the society. Running was forbidden for women. It’s funny to know that back in the day, if you go out for a run in the streets, you were considered as a ‘mad/crazy’ person, in the psychiatric sense… Can you imagine running in Central Park or Hyde Park now and think that theses are all mental people?

YW — There are two photographs in the book that I love and, I believe, reflect the culture of running in Kenya: The runner and the local and the attendance in trees at the cross country race in Eldoret. It really tells a lot about the impact of athletics there and how it is omnipresent.

TG — This place definitely changed the vision I had of this discipline. I will not lie but back in the day when I was deep in skating, running was for … (I won’t say the word skaters used to). By starting running a bit and understanding how it’s hard to actually do it! It really got me thinking about how hard it was. The big change was that morning when we followed the runner for 30km, and see the speed they got, the body capabilities, the dedication was just insane. I remember having goosebumps at some point, so impressed by their performance!

YW — I know you from BMX, motox, surf, skate, … and I also saw how Kenya and running out there was special and gave you and all of us a sort of adrenalin as well…

TG — Of course there’s adrenaline. The sense of risk is way lower. You’re not jumping or playing with a 150kg toy between your legs but there’s this sense of going beyond your limits which is so big that it kind of compensate this feeling.

The one thing that is truly amazing to observe and I think it also comes from my background (my father is into astrology/numerology and the brain capabilities) and for the first time in my life while watching theses runners, I kind of saw what it was to really separate the brain from the body.
Watching them running, you can really see that they’re not with us anymore, the mind is in a total pease mode, so focused they look hypnotised. You can really feel it through their eyes.

And I think that’s the reason why they are so good. This is part of their training process. Brother Colm always says “training the mind more than the body”.

YW — There’s nothing like documenting something as authentic as sport especially in a place like Iten, Kenya. I think that it shines and is reflected in all the photographs from the book. Let’s wrap this up by saying thank you to our team and all the people who welcomed us out there. And everybody go get the last books remaining !

Thank you Yoann and Thibaut for this wonderful conversation and the inspiration to run more, further and longer!
And make sure to get this first volume of the Distance book series at the Distance shops in Lyon and Paris or online here.