“What art does — maybe what it does most completely — is tell us, make us feel that what we think we know, we don’t. There are whole worlds around us that we’ve never glimpsed.” Greil Marcus — Monday June 27th — 17:55 (CEST) — 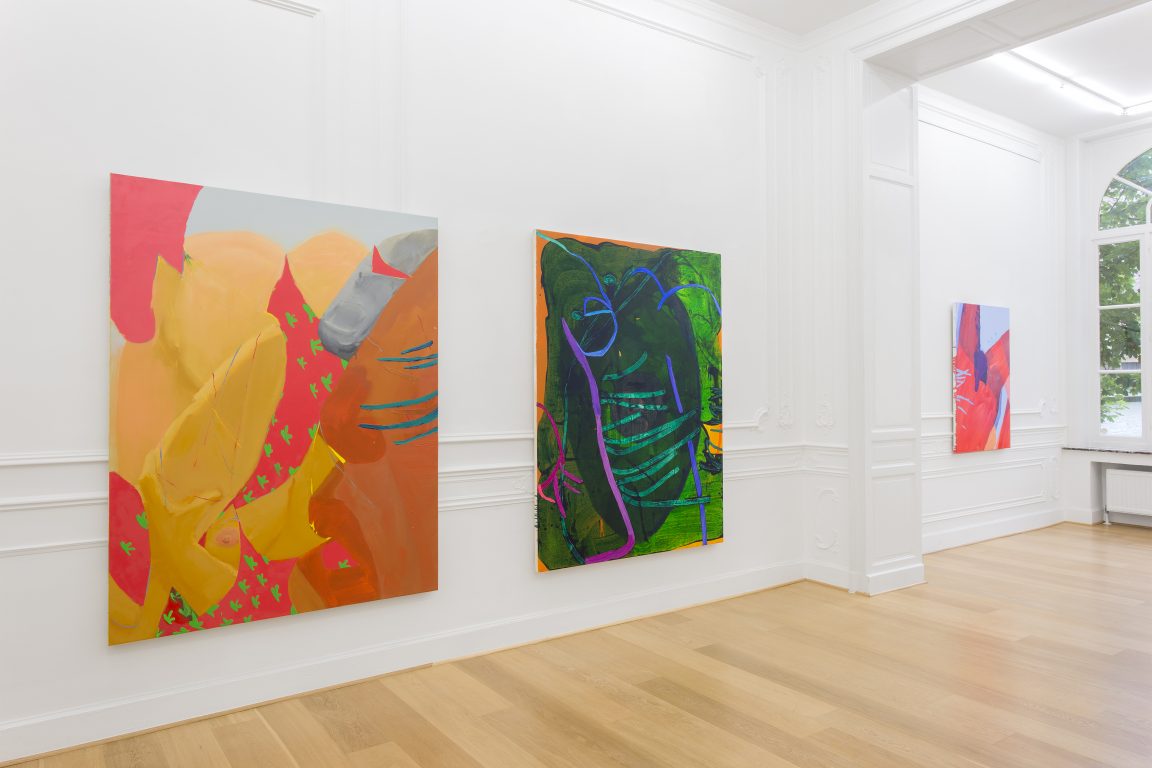 At the beginning of this month the Brussels-based Stems Gallery has opened yet another great show in 2016. After it presented ‘apocatastasis‘ by Greek artist Panos Tsagaris in January, now, for the first time in a solo exhibition, they created a show named ‘Gemini’ featuring new work by the very talented American painter Sarah Faux.

According to astrology the Boston-born is a Gemini (who are characterized for a violent temperament) which forms a starting point for this show. Without being a devout believer in astrology, Faux does strongly believe in the idea that a single person contains multiple selves — resulting in a exhibition full of pairs. ‘Torn at the shoulder’ and ‘Into her inner’ are mirrored reflections of each other. In one a woman looks back at her own naked body through scraps of fabric. In the other, her image is overwhelmed by a deep green field of desire. Calm versus anxiety and openness versus impediments. In a looser pairing, ‘Dig me in’ and ‘Dig me out’ derive their compositions from twisted aloe stalks winding through the surface of each canvas. Both are meditations on painting itself: a tongue lapping up a twisted gray to reveal intense ultramarine behind it; hairy legs shooting through pink gaps, leaving smears of umber in their wake.

In all, the dynamic created by pairing pieces as the described example, ensures a captivating exhibiting, in which even different pairs seem to communicate with each other filling up the space of the Stems gallery, catching every visitor that enters..

Like doppelgangers, the twins in this show harken back to each other in ways both familiar and strange, providing one another with company while eerily unsettling any static notions of sensory life.

Far from being willfully deceptive, Geminis personify innate human conflicts. A parent who raised you with every good intention might also pass on all their most oppressive habits. Your fondest memory of sun pouring through the window as you sip coffee with a lover could transform into a cavernous source of pain post-breakup. How we experience single moments in time can oscillate wildly physically and emotionally. Or maybe that’s just the Gemini in me.

Sarah Faux was born in Boston, but lives and works in New York City. Last year she finished a MFA at Yale University in Painting and Printmaking. Before that she finished a Painting BFA at Rhode Island School of Design and a BA in History of Art and Architecture from Brown University. Her rapidly growing body of work depicts bodies in fugue states, caught with their boundaries dissolving. Within each work, closely cropped figures emerge from fields of color, apprehending the viewer over time. Fingers, legs, nipples and hair push to foreground, never remaining at a safe distance. Inspired by writers like Virginia Woolf and Italo Calvino, who have narrated from multiple perspectives, calling into question the reliability of a single authorial voice, Faux deconstructs a moment of touch in several ways, with each painting becoming more fully engrossed in the conflicting feelings a single sensation can provoke. The work of Faux has been shown in group exhibitions throughout New York City, but also in Dubrovnik, Croatia; Montreal, Canada and now Brussels in Belgium for her very first solo exhibition. With more to come in the near future, without a doubt.

Since I paint in a slippery zone between figuration and abstraction, viewing my work requires accepting a high level of ambiguity. While pop cultural narratives tend to police and categorize women’s bodies, my practice is dedicated to defining feminine experience and sexuality for myself. At times light-hearted and self-loving, at times abject and objectified, my paintings embrace the absurd, ineffable aspects of living in a feminine body.

When in Brussels make sure to see the work of this great talent!

For more information and work by Sarah Faux see here