I love listening. It is one of the only spaces where you can be still and moved at the same time. — Nayyirah Waheed — Friday November 6th — 21:16 (CET) —

“What art does — maybe what it does most completely — is tell us, make us feel that what we think we know, we don’t. There are whole worlds around us that we’ve never glimpsed.” Greil Marcus — Friday November 6th — 21:16 (CET) — 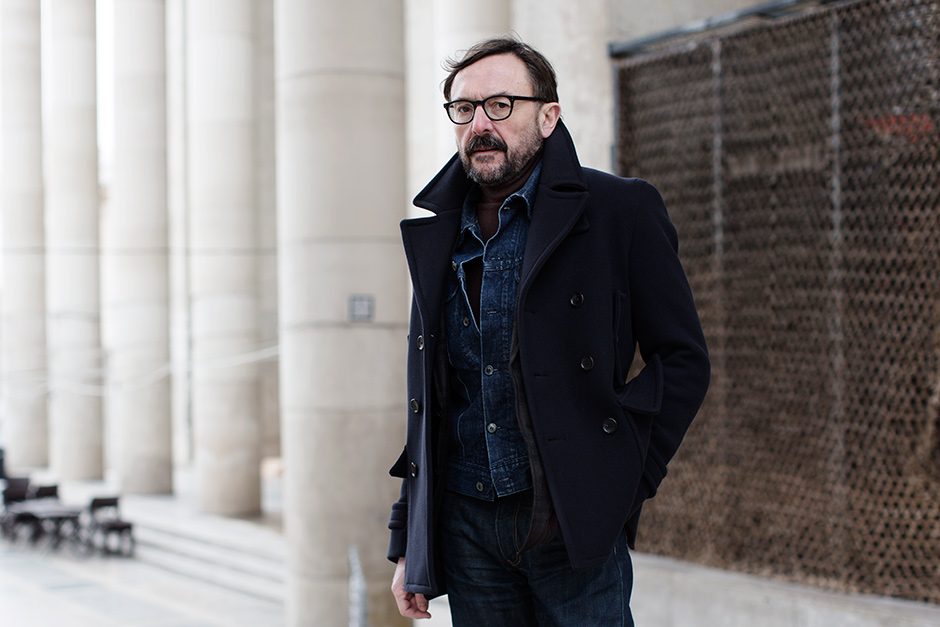 For the just released 12th issue of Journal de Nîmes we travelled to Antwerp to speak with retail pioneer and well-respected figure within the fashion industry: Geert Bruloot. The curator of the current shoe exhibition in the ever-inspiring MoMu has played a pinnacle role in the road to stardom of the infamous Antwerp Six, which he sold before any one else at the avant-garde designer store Louis and exclusive footwear boutique Coccodrillo. On that rainy wednesdayafternoon we sat down with him and talked about the main theme of the issue ‘new vintage’, the importance of the experience in a fashion store and the need for rebellion in these times of homogeneity.

This magazine has as its theme ‘new vintage’, focussing on brands with a rich heritage like Levi’s and RRL by Ralph Lauren, but also new brands, the friction between them and the future that lays ahead.

Before we start, could you tell me what your definition of ‘new vintage’ is? What’s the difference between vintage and ‘new vintage’?

For us the brand Hancock is an extraordinary example of ‘new vintage’. They use century-old techniques to create their materials, using them to produce elegant cutting-edge garments. That’s the epitome of ‘new vintage’ in our eyes.

Personally I have a problem with ‘vintage’. In my eyes, the concept is most easily described through furniture. There are designs from the fifties or sixties, which you can find at a jumble sale and you love them. But once you want to do something with it, put it out there, it will be copied and produced by someone else in no time. And that’s what I hate about the whole vintage phenomenon, the soul will be sucked out of whatever gets the label ‘vintage’.

Moving on into fashion: with young labels like VETEMENTS, which was founded by a group of designers led by Demna Gvasalia – who went to school here at the Academy – and the former right hand of Martin Margiela, who knows every fiber of the Margiela archive. From the moment of its inception, VETEMENTS has been celebrated by the fashion world and critics alike. But I really can’t like it, I really can’t. Martin was incredible. It’s a big disillusion for me to see all that he has created simply being repeated by a younger generation. To me that’s a form of vintage which I really don’t appreciate.

I don’t want to sound nostalgic, but thinking back to all those defining shows: Gaultier, Comme des Garçons; that was all pure emotion. A show by Jean-Paul Gaultier was like a football match. People were lining up outside of the venue, cheering and singing. Today, if you visit a fashion show everyone just sits there uninterested, fumbling with their phone. The models walk by like robots. The audience claps like robots once the show is over.

Why? Because it’s about the product. I see that’s the kind of ‘vintage’ being represented by VETEMENTS, having as its fundamental drive to bring product onto the market.

I don’t want to sound nostalgic, but thinking back to all those defining shows: Gaultier, Comme des Garçons; that was all pure emotion. A show by Jean-Paul Gaultier was like a football match. People were lining up outside of the venue, cheering and singing.

That’s why I feel that ‘vintage’, in the sense of repeating ideas from the past is not interesting at all. But the concept ‘new vintage’ as you have named it; to reintroduce older techniques and use them to create something modern, that’s a fruitful approach. That’s what Margiela did himself, assembling ideas from Japan, the 18th Century, the Seventies, ethnical ideas – always using it to create something new. But, I feel that emotion is slowly on its way back. People are saturated with ‘brands’. To just copy ideas from the past feels like vintage, but to know what has been done before and creating something new out of it: that is for me what ‘new vintage’ is.

The Store as Experience

When it comes to fashion stores: I feel that we need to return to less but better. Go to a random city these days and you’ll see the same stores. It’s a homogeneous mass. If we return to less [stores] it will also guarantee a bigger diversity, I feel.

When I think about Tenue de Nîmes we aspire to offer exactly this vision of less but better, but I realize that we nevertheless need to reach a large number of people in order to sell the numbers we aim for. Our approach in this has been elegant marketing, of which the Journal de Nîmes is an example, reaching a large number of people to make them aware of our world. This works very well for us. But there remains the difficult balance between less but better and the general rules of fashion retail.

In my eyes you are on the right track with your approach, but I also believe there’s still a lot of potential to move away from the initial products, for instance in the magazine. Why not ask a writer to pick his brain about jeans? I feel it’s important to get back in touch with the soul of the people that encounter your store, instead of focusing on product merely. At the end of the eighties Comme des Garçons published Six Magazine. Although it was clearly in line with the overall Comme des Garçons aesthetic and feel, there were hardly any products in it. Art, design, interviews, all kinds of stories. It was incredible, strictly focused on emotion. I believe we need to move back in that direction.

The interesting thing about this era is that literally any product is available online. People still visit stores because they are looking for more, an experience.

An online purchase is a solitary experience. You are alone, at home. Acting because you feel the need to buy whatever you are buying. This reality of people always being able to buy the product we are selling has been on our agenda for years now, asking ourselves how we continue to make a difference.

How do we succeed in triggering people to choose the shop experience above the solitary experience, without being cheap in our approach. I don’t like to lure people with champagne, basically buying your customers, but I want to offer them a sincere experience by entering the store. That is what’s most important to me.

One of the few places where I still see a strong sense of experience remains on Savile Row. Whoever decides to get a suit there, which will last a lifetime, will agree that it’s a tremendous experience. After you have experienced Savile Row it will be the only thing you want.

What we really appreciate about a brand like Acne are their stores. Talking about experience, when looking at their New York store, the look and feel is completely different from their Tokyo store.

Dries van Noten has that same approach. And don’t forget Aesop! That’s the future for me. Those stores entice you to walk in, experience what’s inside and see what the product is about. Every Aesop store you enter will give you a different experience. There’s always something new to be found. I love that. Also the Raf Simons/Sterling Ruby pop-up store, here in Antwerpen, was spot on. Everything was well done: the space, the products, every week there was an event with people like Richie Hawtin and Marcel Dettman performing in that remarkable industrial space. Sublime.

The Importance of Rebellion

I still hold a person like Vivienne Westwood in the highest regards. Recently she rode a tank right up to David Cameron’s house. That is incredible. That’s what we need. Without realizing it, while we were creating the exhibition, most shoes on display were designed under her label. She never stopped rebelling since she grew out of the punk movement.

I still hold a person like Vivienne Westwood in the highest regards. Recently she rode a tank right up to David Cameron’s house. That is incredible. That’s what we need.

The difficult element of these times is that it has become so hard. Everything has been or is being done. Most subcultures have faded away.

I think there’s still enough to rebel against. For instance the slavery in the production of fast fashion. Isn’t that something we can rise against? It’s possible! People are collectively appalled when a factory collapses in Bangladesh, but have forgotten about it 3 days later. It is about time that people start really resisting.

Where else could rebellion come from?

There are many ways. Starting with a creative rebellion, like Walter van Beierndonck does. Take the old values, cut them up, reshape them, juxtapose it all and create something new out of it. But also conceptually one can rebel by raising your voice about mishaps in modern fashion. We all have voices, therefore we all can express ourselves. Be introspective, express your true sentiments. Stop using the vocabulary of the masses.

The younger generations need to step up and say: Fuck you, you are doing it wrong. This is not acceptable, we don’t want it. They really need to do that! I love rebellion, as it’s an important source for new ideas to grow from. In my eyes punk was the biggest form of rebellion in the second half of the 20th century, still resonating throughout our Western society, but I feel we are ready for a new kind of rebellion.

I have lost faith in the system of modern fashion. The model of big luxury houses basing their turnover on the sales of bags and perfume in the Middle East is slowly losing relevance in my eyes. The walls are coming down. Whenever people ask me: what is luxury for you? I will tell them: the biggest form of luxury for me are freshly ironed sheets. No expensive cars or a coat, no. Fresh sheets, that’s luxury for me.

In this light I feel that at the moment the transition of Gucci is very inspirational and hopefully indicative of a trend. With the new creative director Alessandro Michele, who rose out of their own ranks, they didn’t choose a head designer being a brand of his own, but instead they are giving power to a creative visionary. The emotion is sensible again. Michele dressing men in traditional female garments in his first collection, without it being blatant feels refreshing. One feels that he has new ideas and he’s being granted the possibility to work out his vision.

I have lost faith in the system of modern fashion. The model of big luxury houses basing their turnover on the sales of bags and perfume in the Middle East is slowly losing relevance in my eyes. The walls are coming down.

A company as big as Gucci giving creativity and emotion a chance and being rewarded by the consumers for it gives me good hope for the future.

‘Footprint, The Track of Shoes in Fashion’ curated by Geert Bruloot will run at MoMU in Antwerp until the 14th of February 2016.

Included with the interview are images of the Japan-inspired Tabi boots by Martin Margiela, the incredible newly opened Aesop store in Milano, some spreads of the legendary Six Magazine and Gucci’s Autumn/Winter 2015 show.

Portrait of Geert by The Sartorialist.

See here for the whole interview