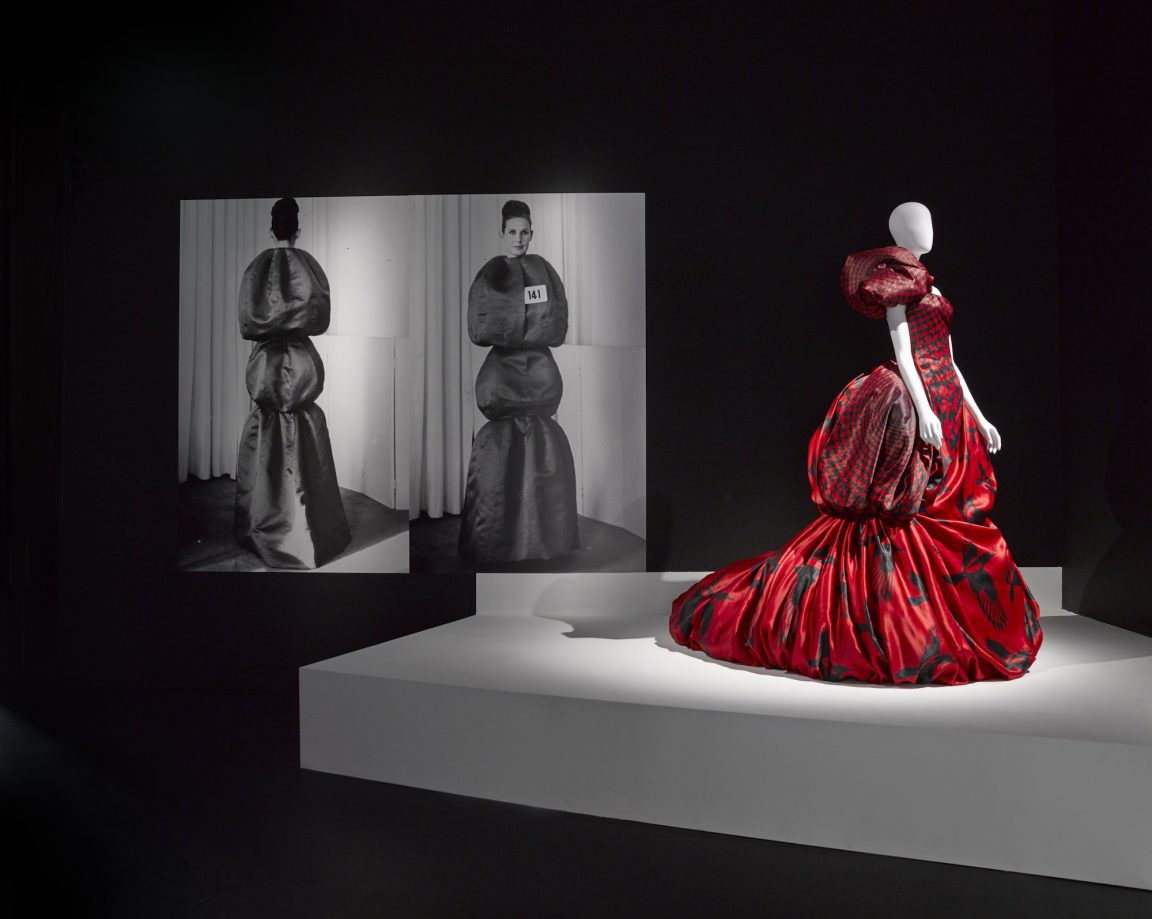 The MoMu Fashion Museum Antwerp is among our favorite museums period  (for more than one reason) yet their latest extraordinary exhibition named ‘Game Changers – Reinventing the 20th century silhouette’ might very well be their greatest creation until date. The exhibition looks at the groundbreaking work of fashion designer Cristóbal Balenciaga and forms a special passion project of the museum’s curator Karen van Godtsenhoven, in a collaboration with Balenciaga expert Miren Arzalluz. The innovations of the Spanish designer in the middle of the 20th century created a radically new silhouette, in which the body got freedom of movement and architectural volumes created a space around the body. Along with the pioneers of haute couture in the 1920s and 1930s and later on also the (Japanese) designers of the 1980s and 1990s, Balenciaga provided an alternative for the prevailing constrictive hourglass silhouette, being an elementary frontrunner in pushing the aesthetic enveloppe and inspiring the world to rethink certain prevailing paradigms. Balenciaga and those who stepped into his footsteps, all Game Changers within their personal context looked at fashion of the 20th century from a new perspective shaking up the status quo. Very different than for instance the way more eclectic ‘Dries van Noten Inspirations‘ exhibition, the scenography created for the new remarkable curation of fashion history is minimal, letting the different themes speak for itself — making the exhibition an extraordinary captivating overview of some of the most iconic avant-garde moments in modern female fashion. When in Antwerp before the 18th of August this exhibition is a must visit!

If you’re not waking up what is asleep, you might as well stay on the beaten path.

All of the designers presented in the exhibition are conceived of as a family tree of innovators: each of them pushed the ideas about fashion forward, experimented with or developed their own techniques, materials and shapes and thereby changed the relationship between body and garment. In this way, they revolutionized fashion, making them not just trendsetters but game changers who changed the way people thought about fashion and what can be considered as fashion.

Influences from Japan, such as the kimono, liberated women from their tight corsets at the beginning of the 20th century. Fashion designers such as Madeleine Vionnet, Paul Poiret and Coco Chanel shaped this freedom in the 1920s – 1930s with technical innovations and modern ideas about feminity. At the end of the 20th century, the boundaries of the female silhouette are further explored by Japanese and Belgian designers such as Issey Miyake, Yohji Yamamoto, Comme des Garçons, Ann Demeulemeester and Martin Margiela. They paved the way for new body shapes and abstract silhouettes and gave a new interpretation of what could be considered as fashion.

But it all starts with the central figure of the exhibition; the Basque fashion designer Cristóbal Balenciaga (1895-1972) who is seen as the pivotal figure between the two periods, the architect of innovation. His patterns and work are the central axis of the exhibition. Each of the other designers worked in their own way on similarly innovative ideas and shifted the boundaries of the classic feminine silhouette.

The result is an exhibition having several layers beyond just the aesthetic of the garments, inspiring (self)reflection on where we stand even today, as a perfect hommage to the cultural impact of all of these iconic designers with their work.

All images are courtesy of the MoMu Antwerp.

Photography of the exhibition by Stany Dederen.