I love listening. It is one of the only spaces where you can be still and moved at the same time. — Nayyirah Waheed — Monday February 6th — 17:10 (CET) —

“What art does — maybe what it does most completely — is tell us, make us feel that what we think we know, we don’t. There are whole worlds around us that we’ve never glimpsed.” Greil Marcus — Monday February 6th — 17:10 (CET) — 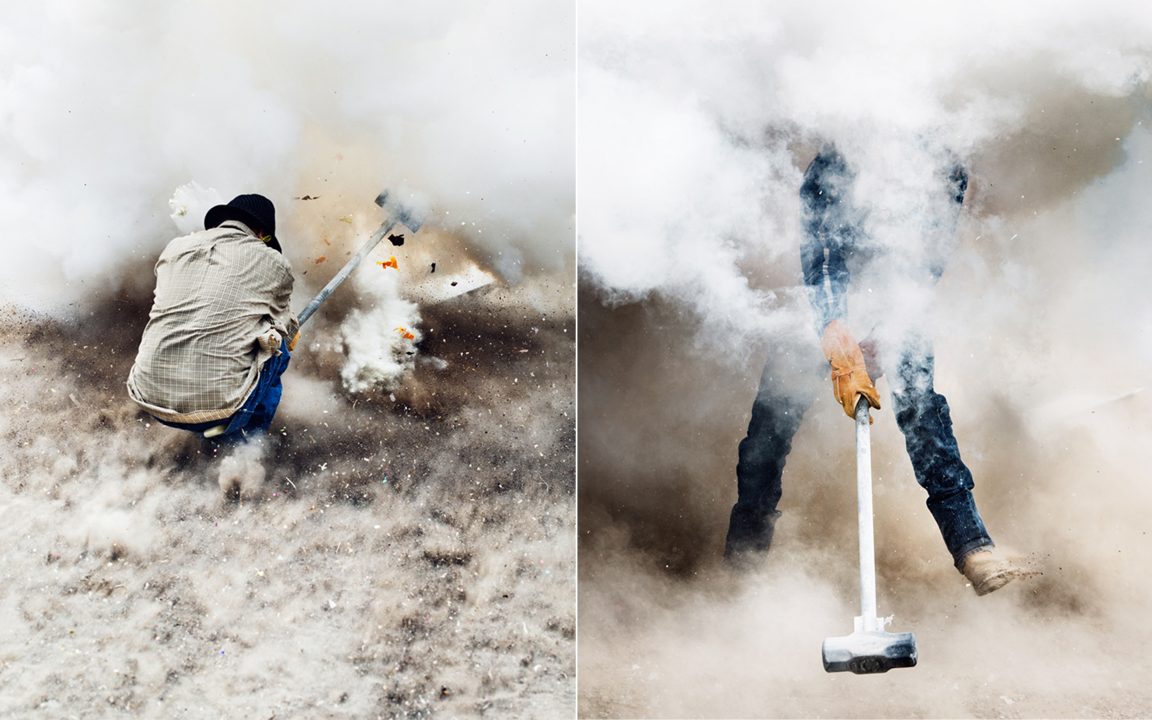 At the end of last year, the highly remarkable series named ‘Bomba’, shot by the very talented American photographer Thomas Prior, has been presented as a beautiful book by Dashwood Books, which turned out into one of the more interesting releases we have seen recently. ‘Bomba’ takes the viewer to the Mexican town of San Juan de la Vega, where every February its people gather together to commemorate a four-century-old battle that occurred between the town’s namesake and the area’s landowners. The story goes that Juan de la Vega, a wealthy miner and rancher, was aided by the saint in recovering gold stolen by bandits. Residents took up exploding sledgehammers to commemorate the victory over the thieves. And so, on so-called ‘Fat Tuesday’, in the middle of a football pitch in the town, packets of fertilizer and sulfur explode into clouds of dust and shrapnel. Today the tools are reinforced with rebar, and the celebration features blasts but now more flying hammer heads. Hundreds of local men strap homemade potassium chlorate fertilizer-based explosives to the heads of sledgehammers and slam them against the lengths of steel rail.

The isolation Thomas has achieved in the imagery, emphasizes the danger and violence of the peculiar tradition. With the clouds of phosphorus smog surrounding each of the men, the subjects are erupting out the cloud, with the rest of the background misted out erasing all kind of context. This could be a scene out of a war if one wouldn’t know better. The result is an ambiguous surreality within the series -and the festival as a whole- as it’s still not totally clear where this salute to Juan de la Vega originally derived from, which makes it a series we can’t take our eyes from.

It’s Nice That on the series:

Many of the men who take part in the series are unprotected, simply wearing jeans and T-shirts. The photographer times his shots perfectly and captures various moments including the point of impact and the cascading aftermath where many of the participants’ feet are off the ground.

As the case with ‘Bomba’, Thomas Prior’s career shows an extraordinary talent in catching decisive moments, grounded in many years of experience and an indisputable relentless approach. His work is predominantly documentary in style, but led by the framework of storytelling, showing a great sensibility for a strong visual impact and leaving the spectator with a narrative in a single frame. Personal projects by Prior follow his interest in dangerous recreation and his eye for the offbeat. Seeking out the absurd or incongruous detail, Thomas reveals the unexpected beauty and humor in everyday life. His photography, amongst others, brought him to a community that thrives in Willets Point, New York; marginal communities in Rwanda and most recently the extraordinary tradition in the town of San Juan de la Vega. What unites his work and enables an easy relationship with his subjects is an inquisitive interest in and passionate enthusiasm for what’s going on around him.

Thomas Prior was born in Los Angeles in 1979 and spent several years in London. He has lived in New York since attending the School of Visual Arts, where he gained a BFA in Fine Arts (2002). In 2010 he was included in PDN’s 30. Some of his former clients include: Mr Porter, Nike, Sony andUnder Armour. His work has been published by Architect, Bloomberg Businessweek, Fast Company, The New Yorker, The New York Times, TIME Magazine, and Vice, amongst many others.

All images © Thomas Prior.