I love listening. It is one of the only spaces where you can be still and moved at the same time. — Nayyirah Waheed — Thursday November 9th — 15:00 (CET) —

“What art does — maybe what it does most completely — is tell us, make us feel that what we think we know, we don’t. There are whole worlds around us that we’ve never glimpsed.” Greil Marcus — Thursday November 9th — 15:00 (CET) — 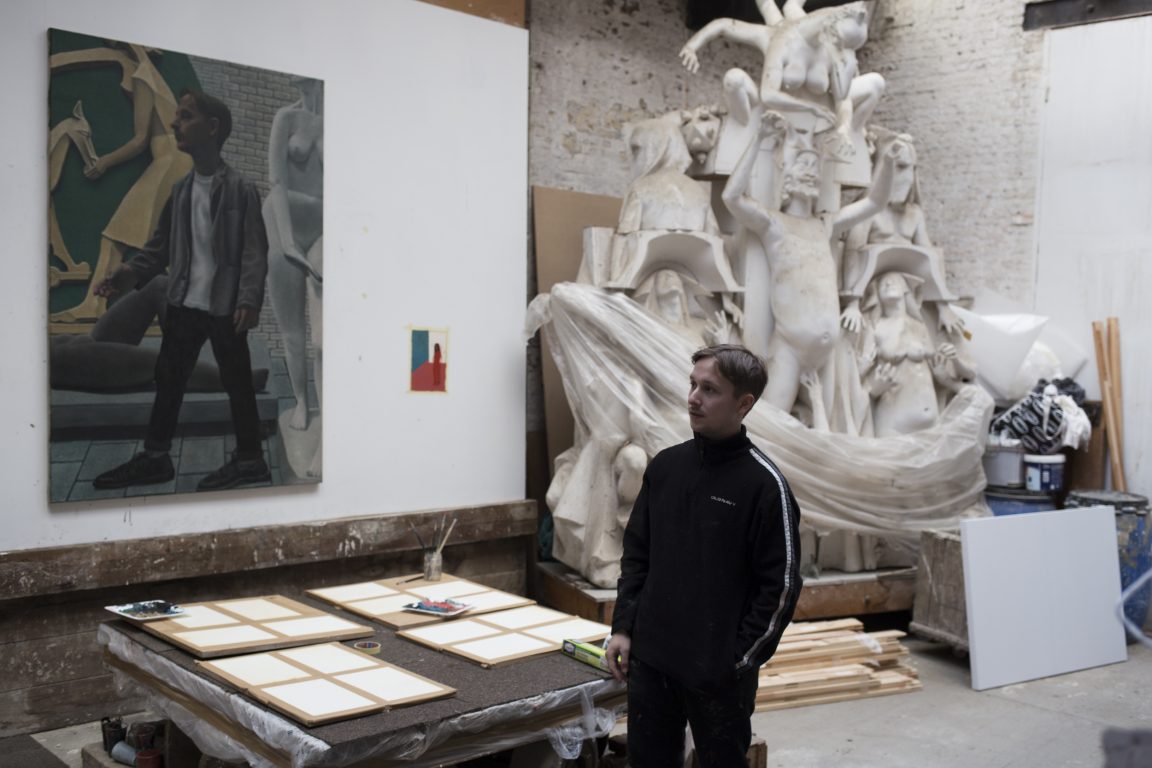 The Lange Leemstraat is one of Antwerp’s longer continuous streets. It starts on the edge of the city center and cuts straight through the Klein-Antwerpen area, which is popularly better known as (a significant part of) the Jewish neighborhood. The street slices the segment of the Belgian city between the Mechelsesteenweg, the Van Eycklei and the Belgiëlei, in two halfs — together forming a perfect triangle when seen on a map. Most of the tall but narrow houses in the street are at least four stories high and an overall multiethnic feel prevails next to the omnipresence of the orthodox Jewish community; when entering the street one is instantly struck by a metropolitan vibe. It feels like a miniature Brooklyn in the heart of Antwerp. For me, it forms one of the many (hidden) qualities of the city with a remarkable cultural diversity and unique urban structure that was only partly transformed for the modern age.

When continuing along the street from the center, somewhere halfway at the heart of Klein-Antwerpen, the impressive ‘Résidence Isabelle’ arises. The street is too narrow to actually see it before being in its proximity. All of a sudden it’s just there, forcing the street into an Y-crossing. The apartment building is the kind of beautiful architectural dissonance one finds throughout Antwerp. It doesn’t match with its surrounding, but fits beautifully. In today’s digitally globalized world the concept (or illusion?) of visibility is more dominant and demanding then ever. In my eyes, an organically grown, bricolaged, environment like the Belgian harbor city still cultivates the opposite: a strong sensibility for the unknown and the mysterious through its partly chaotic, partly impractical, but always deeply intriguing urban DNA.

When somewhere last year, we discovered the work of a young Antwerp-based painter named Bendt Eyckermans, a very similar feeling of mystery hit. Who was behind these striking paintings, reminding of some of my favorite magic-realistic artists, yet with an incredible contemporary perspective and subject matter? After connecting through Instagram (bless the digital age too!), Bendt agreed to meet in his studio, which to my surprise is located right there in my favorite neighborhood of the city.

At the given location, a pathway hidden behind a large garage-like wooden gate, leads to a redbrick house built twenty meters behind the row of houses directly alongside the street. This turns out to be the studio where Bendt works. Through another particularly large wooden door with a bird-shaped peephole, the young painter invites us into his personal universe, which technically turns out to be the universe created by his grandfather, sculptor Lode Eyckermans, that  was adopted by the young painter after graduating. Visiting the space will leave an everlasting impression on everyone who steps in.

This development of Bendt moving into the studio his grandfather took on in the 1940s, marks an interesting moment of new life officially flowing into the rich artistic legacy of the Eyckermans family again. Following in the footsteps of his grandfather, Bendt dedicatedly brings it into the 21st century, one haunting painting after another. Entering this unique cultural hybrid space, being both a time capsule filled with Lode’s numerous sculptures (including the larger than life tomb stone he created for himself, but wasn’t used for his actual grave), and at the same time functioning as Bendt’s breeding space for his new contemporary paintings, is quite a magical experience hard to put into words — besides that we feel very grateful that we were granted to see behind the lid.

Bendt was born and bred in Antwerp, in the same neighborhood where the studio is located. He graduated from Antwerp’s Royal Academy as Master of Painting in 2016, having been raised in a creative family. From an early age, through attending Antwerp’s Sint-Lucas (high) School of Arts, he knew he wanted to find a voice to express himself. As a teenager he thought this would be through film direction, but when he concluded his education at Sint-Lucas, he decided to focus on painting. Not because he had been doing this already during his years in high school, but quite the opposite: because he realized he couldn’t paint at all. He wanted the challenge.

In an intens warm yet dark color palette, Bendt takes the world around him: his friends, lover, good and bad experiences, and most important of all ‘his’ city Antwerp, translating all these elements into remarkable paintings.

As he had a focus on graphic work at Sint-Lucas, transitioning to the the classical art of painting when enrolling at the Academy of Antwerp took two years, in which he struggled, but eventually it brought him the strongest artistic voice he ever had. Despite having a soft-spoken and modest character, it enables him to share his unique vision and thoughts on his direct environment. He became the film director, DOP, art director and gaffer of his own ‘films’ caught in a single frame. In an intens warm yet dark color palette, Bendt takes the world around him: his friends, lover, good and bad experiences, and most important of all ‘his’ city Antwerp, translating all these elements into remarkable paintings.

In a period of time in which most of Bendt’s peers are more and more under the influence of the ever-expanding metrics-based virtual reality, digging its roots deeper into the intrinsic reality then ever before, the young painter feels an intrinsic urge to stay critical towards these developments. If only, although its clearly not the only reason, because it slowly but certainly eats away the one thing that he (and his grandfather before him!) values most: the mystery that lays behind the unseen in general and the city of Antwerp in particular. (This last observation becoming particularly clear after having seen his first solo exhibition at Kusseneers Gallery in Brussels last weekend: his works live and breath Antwerp, especially when seen in a white cube.)

Bendt refuses to over-intellectualize his own depictions, overloading it with all kinds of conclusive meaning on for instance his generation — the young painter simply sees his work as personal observations on his life and the people around him. In his paintings, he aims to honor the mystery that lays underneath everything, hopefully inspiring others to see beyond the obvious too. This sheds a new light on the covered faces, hidden figures and unorthodox representations of the streets of Antwerp that can be found in a lot of his works. It presents the spectator with space to search for something else. Despite the realistic aesthetic and representations of contemporary cultural elements that clearly make his work about the now, there is always room for imagination and in our eyes a need for a closer look.

Bendt simply sees his work as his personal observations on life and the people around him. In his paintings, he aims to honor the mystery that lays underneath everything, hopefully inspiring others to see beyond the obvious too.

After having been there ourselves, we can’t think of a better place than that mysterious studio holding the legacy of his grandfather, sitting hidden behind the streetside, for Bendt to create just this. Or maybe the influence works the other way around: without the city of Antwerp, with its fascinating composition that hides the studio of his grandfather, there would have been no works of Bendt as they exist today. Either way, the rest of the world will learn about it soon enough, as Bendt might very well follow in the footsteps of his friend (and Antwerp’s current golden boy painter) Ben Sledsens who’s taking over the world, showing at Nino Mier in Los Angeles, as we write this — we feel deeply inspired to have been given the chance to experience the beginning of a new mysterious Eyckermans legacy so early already.

Bendt’s first solo exhibition named ’The clouds have gathered’ will run until November 25 at Kusseneers Gallery in Brussels. Located at the Menenstraat 10, in the Molenbeek district, it is opened Thursday through Saturday from 14:00 until 18:00 (or on appointment).