I love listening. It is one of the only spaces where you can be still and moved at the same time. — Nayyirah Waheed — Monday October 3rd — 19:40 (CEST) —

“What art does — maybe what it does most completely — is tell us, make us feel that what we think we know, we don’t. There are whole worlds around us that we’ve never glimpsed.” Greil Marcus — Monday October 3rd — 19:40 (CEST) — 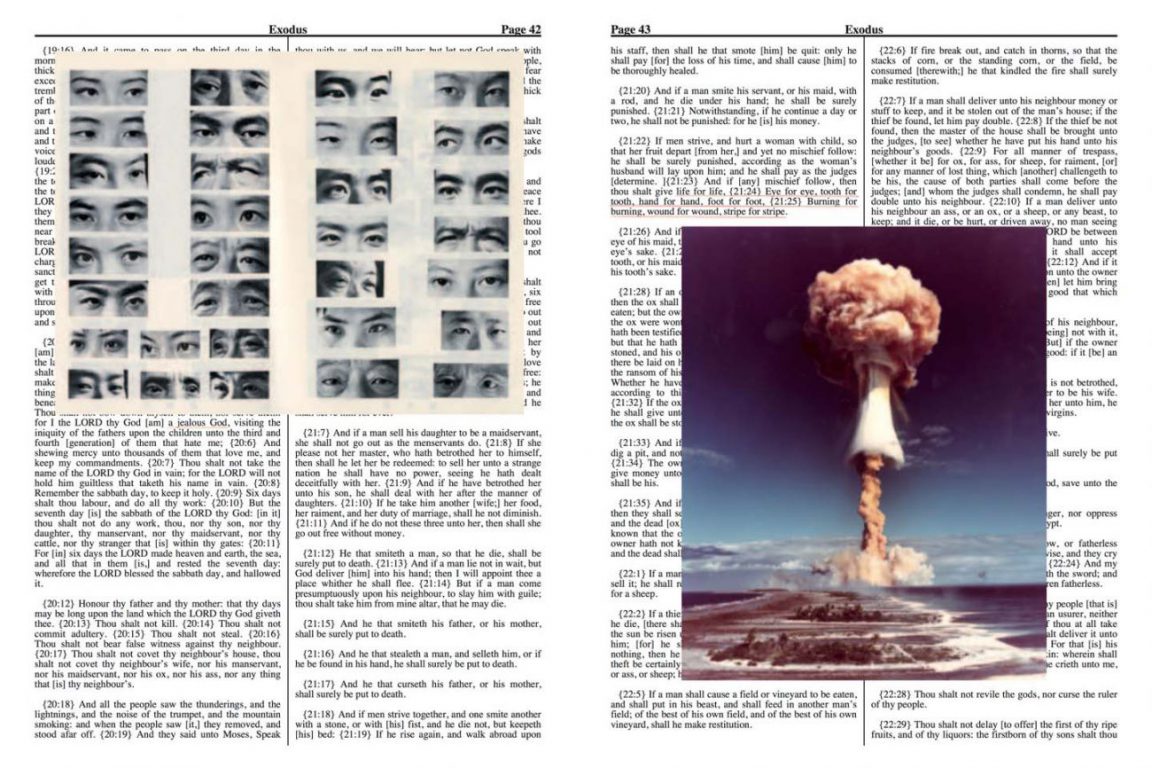 South African artist duo Adam Broomberg and Oliver Chanarin became instant favorites of ours from the very moment when we discovered their thought-provoking ‘King James Bible‘ project in the Summer of 2013. The duo works with the eyes of anthropologists, infusing concept within concept —steadily provoking the spectator to research and contextualize their creations beyond the first encounter— in their often raw edged creations rooting directly from the dark side of human life. The inspirational C/O art institute, which for instance brought the incredible ‘Beneath the Roses’ by Gregory Crewdson and Peter Lindbergh’s ‘On The Street’ exhibitions to the German capital, just opened another must visit, this time featuring the incredible work by Broomberg & Chanarin in the exhibition given the moniker ‘Don’t Start With The Good Old Things But The Bad New Ones’, featuring two iconic projects in which the duo highjacked two seminal books: Bertolt Brecht’s War Primer, and The Bible (which formed our introduction to the duo’s work, as stated earlier), using them as vehicles to explore the documentation, dissemination, and currency of such images within in the media.

The artists juxtapose passages of text, which contain concrete acts of violence, with images, that are often shocking in their violence or tenderness. Images mined from the Internet or The Archive of Modern Conflict function as a means to inhibit a simplified consumption of both text and image. In this way the artist duo challenge our viewing habits, and force us to become a critical observers, unable to passively lose ourselves in the spectacle.

In theatrical terms the Brechtian distancing effect is felt when the narrative is interrupted by characters stepping outside of their roles to discuss the plot with the audience directly; in Broomberg & Chanarin’s works it is the image that disrupts and, in doing so, creates distance between the viewer and the content, and a new level of reflection.

Adam Broomberg was born in Johannesburg in 1970, and moved to London to pursue his studies. Oliver Chanarin was born in London in 1971, and later moved to South Africa where the two first met, in the 1990s. They worked as photographers and visual artists for Colors magazine before founding their own studio in London. Together they have published nine monographs, including ‘Holy Bible’, ‘Spirit is a Bone’, and ‘War Primer 2’. They are professors of Photography at HFBK, Hamburg, and teach at KABK in The Hague. In 2013 they were awarded the Deutsche Börse Photography Prize, and in 2014 the Infinity Award from the International Center of Photography. Their works have been exhibited around the world and are located in important public and private collections, including Tate Modern, The Museum of Modern Art, Victoria & Albert Museum, International Center of Photography, Musée de l’Elysée, and the Stedelijk Museum.

The new exhibition, curated by Ann-Christin Bertrand includes approximately 90 images, and will open along with the launch of Broomberg & Chanarin’s new book; ‘Humans and Other Animals‘.

The exhibition will run until the 4th of December 2016. For all information on ‘Don’t Start With The Good Old Things But The Bad New Ones’ see here