Anything can happen in life, especially nothing. — Michel Houellebecq — Tuesday April 22nd — 12:00 (CEST) —

“What art does — maybe what it does most completely — is tell us, make us feel that what we think we know, we don’t. There are whole worlds around us that we’ve never glimpsed.” Greil Marcus — Tuesday April 22nd — 12:00 (CEST) —

Once again we are extremely pleased to give another beautiful preview of a story by one of our favorites on the internet: Jungles in Paris, curated by Darrell and Oliver Hartman. This particular story takes place in downtown Dakar, on a beach called the Plage de Fann, although most of the regulars there don't even really need to call it by name. End-of-day beach workout is a routine part of life for many fit young guys in the city, especially the students who go there after class at nearby Cheikh Anta Diop University. They have benches with weights made from old wheel rims, and permanent apparatuses for push-ups and pull-ups. All of it is very basic. Guys do push-ups in the sand, skip rope, help and compete with each other, and just generally hang out. Of course there is lots of soccer played as well, as there is all over Senegal. There's a little side area for prayer. This is a city where you can do this sort of thing year-round, given the climate, although it's often cooler and more comfortable towards end of day. Certainly a workout place unlike any other in the world! [ Continue reading ]

We are very thrilled to give another fantastic preview of a feature story by the highly inspiring online platform Jungles in Paris. This story focusses on the environment of the Weddell seals and is an outtake of the beautiful book The Last Ocean by photographer John Weller. Weddell seals live in Antarctica, and unlike other large animals there, like for instance whales, other seals, or penguins, they don't migrate North during the winter. No other mammal on earth lives this far south. They have extraordinary diving abilities, can go as far as 700 meters below the ice in their search for fish, and stay underwater for as long as an hour. [ Continue reading ]

We are highly inspired by the online platform of writer Darrell Hartman, writer for among others New York Magazine, Travel + Leisure, Details, and the Wall Street Journal, and his brother Oliver Hartman, called Jungles in Paris. It aims to redefine armchair travel using a global network of professional photographers and filmmakers, it produces and presents short, focused stories on culture, craft, geography, and wildlife around the world. Instead of splendour the Hartman brothers aim to go small and observe with an highly critical eye by focusing on the unexpected surprises uncovered by the careful traveler, from ritual skin-piercing in Ethiopia’s Omo Valley to the beautiful aesthetic of the colourful house fences one finds in Rwanda. [ Continue reading ] 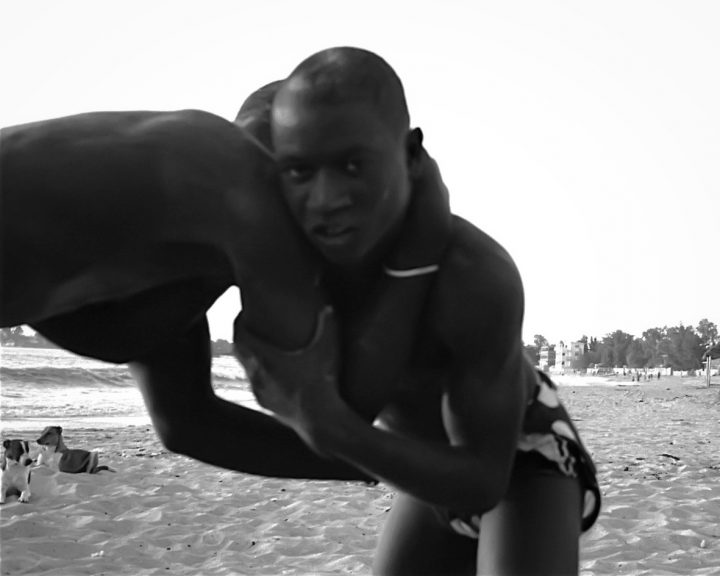 More than two years ago we wrote about a new Jungles in Paris story which took the reader on an insightful trip to the West African country of Senegal. As in most Sub-Saharan African countries football is the clear favorite sport there, but an indigenous sport that has existed for centuries is traditional wrestling named Laamb in Wolof. It is one of the sports in which the young men engage on the famous 'Plage de Fann' beach in Dakar, which was singled out in the beautiful story. Since ancient times Senegalese wrestlers competed before the king and queen in village squares. Singers, dancers, and storytellers embellished the match. Wrestlers wore amulets to ward off evil spirits and black magic from their opponents. Nowadays, the tradition remains strong. As in former times, griots praise the victors in song and dance.

The contemporary champions of the traditional wrestling sports are celebrities in Senegal, with fighters such as Yékini (Yakhya Diop), Tyson (Mohamed Ndao), and Bombardier (Serigne Ousmane Dia) the best known. Today we want to take another look at the beautiful sport, this time through the lens of French photographer Laurent Laporte who shot a series on one of his many travels named after the famous wrestler: 'Bombardier'. Young Senegalese boys, who meet each other on beaches like Plage de Fann, dreaming to become as big as 'the bomber' — caught remarkably by Laporte who made the series half duotone and half color. Finding remarkable frames which represent both the sport and the country in a unique and exciting way.  [ Continue reading ]

The Holi Celebrations in Vrindavan

Another beautiful story by our friends of Jungles in Paris which we can share, again shot through the lens of the talented Belgian travel photographer Pascal Mannaerts, who continues to bring us beautiful stories from India. This instance taking us to the city of Vrindavan, which is located 10 kilometer away from where an important Hindu deity, Krishna was born. It's one of the major celebrations of Holi, if not the major one, especially in the Banke Bihari temple. Celebrants drench each other with colored water and throw fistfuls of gulal – brightly tinted powders, traditionally made by dyeing arrowroot starch with spices, leaves, and flowers. Although these days, it is more often chemically pigmented cornstarch. At the Banke Bihari temple, which is among the most sacred places to worship Krishna, eruptions of red, yellow, and magenta waft down from the roof, landing on the sea of ecstatic faces in the courtyard. They say Holi is a time to come together, to repair broken relationships, and to forgive oneself of past errors. In a caste-bound society, it is also a time when inhibitions are lost, and everyone stands on more equal footing. Jungles in Paris continues to inspire us. [ Continue reading ]

The Crosses of the Ethiopian Orthodox Church 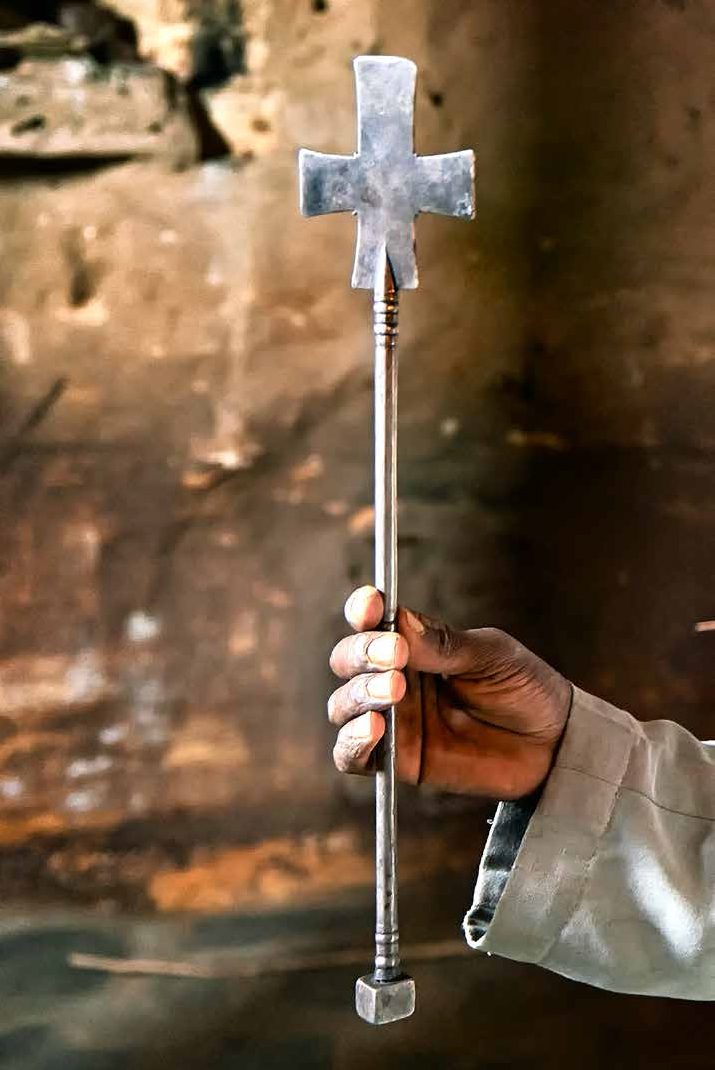 We are very happy to share a new breath-taking story by our favorite online destination for armchair travel: Jungles in Paris. The story finds another extraordinary angle and examines the crosses of the Ethiopian Orthodox Church. Based in the country's northern highlands, it is by far the oldest Christian tradition in sub-Saharan Africa, which dates back as far as 1700 years ago. Its rituals are more ancient than those of many other Christian denominations around the world. Crosses are, unsurprisingly, a major part of the visual and spiritual expressions of this church, and they come in a beautiful variety of wood and metallic forms. Many of the designs are found nowhere else on earth and are beautifully caught by the very talented Greek photographer Lizy Manola, as part of her newly released publication named 'Ethiopian Highlands', out of which, through the observation and curation of Jungles in Paris' driving forces Oliver and Darrell Hartman, this beautiful story was created. [ Continue reading ]

We are highly inspired by the online platform of writer Darrell Hartman and his brother Oliver Hartman, which they founded last year and named Jungles in Paris. The extraordinary project aims to redefine armchair travel using a global network of professional photographers and filmmakers, producing and presenting short, focused stories on culture, craft, geography, and wildlife around the world. Instead of splendor the Hartman brothers aim to go small and observe with an highly critical eye by focusing on the unexpected surprises uncovered by the careful traveler, from ritual skin-piercing in Ethiopia’s Omo Valley, the beautiful aesthetic of the colorful house fences one finds in Rwanda, to the Ranch Rodeo in a small town in Wyoming, USA. As Darrell is such an inspiration for both his vision and his dogmatic approach in these rather superficial times, we've asked him some questions on what has and still inspires him in life. [ Continue reading ]

The Sadhu of Kumbh Mela

The latest story by the ever-inspiring Jungles in Paris brings us back to colorful India where talented Belgian travel photographer Pascal Mannaerts moved from the camel herders of The Great Indian Desert towards the east of North-India where at four locations the utmost fascinating and impressive Hindu festival Kumbh Mela is celebrated. The festival which takes place at the confluence of three sacred rivers; the Ganga, Yamuna and mythical Sarasvati, is the largest regular gathering of people on earth. Pilgrims come together at a time and place of divine indication, forming a massive swell of humanity from which a single type usually stands out: the sadhu, or holy man. [ Continue reading ]

The Camel Herders of Rajasthan

The latest story by the always inspiring Jungles in Paris is once again of great beauty. It focusses on the the camel herders living in the largest Indian state by area, named Rajasthan, which translates to Land of Kingdoms. A large part of the state comprises of the Thar or Great Indian Desert, in which one still finds a significant group of people living of camel herding. The centre for these herders in terms of trade is the town named Pushkar and its fair which attracts herdsman from all over the desert. The images for this story were all taken in this town, located in the middle of the Rajasthan state and more importantly the Thar Desert, which explains why it attracts herdsman from all over, which prove to be the perfect subjects with their highly stylish appearance through colorful turbans and garments, beautiful accessories and faces showing the hardships of the desert. [ Continue reading ]