I love listening. It is one of the only spaces where you can be still and moved at the same time. — Nayyirah Waheed — Thursday August 11th — 18:57 (CEST) —

“What art does — maybe what it does most completely — is tell us, make us feel that what we think we know, we don’t. There are whole worlds around us that we’ve never glimpsed.” Greil Marcus — Thursday August 11th — 18:57 (CEST) —

Anything can happen in life, especially nothing. — Michel Houellebecq — Thursday August 11th — 18:57 (CEST) — 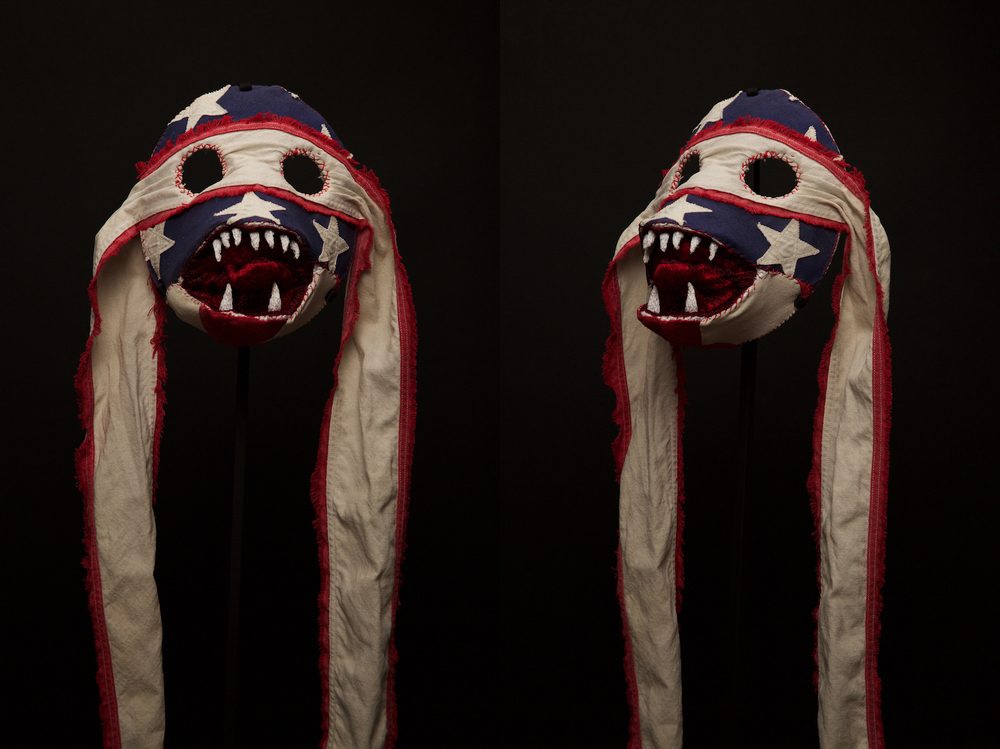 The exhibition of ’50 Masks Made in America’ by Belgian artist Christophe Coppens at the ever-inspirational Please Do Not Enter ended a little under two months ago, but we can’t but still share one of the most impressive projects we have encountered this year, despite failing to do so at the time of the two month stretch when they were actually on display in Los Angeles. Let’s hope that the masks will travel somewhere else, anyway…

From May until July, the leading (hidden) concept store/gallery presented the very first Los Angeles exhibition of new works by Coppens, who’s former master milliner and in the last decade primarily works in the fields of fashion and the arts, creating special sculptural projects. As the title clearly suggests ’50 Masks Made in America’ featured 50 new, mixed-media sculptural masks, all made by hand especially for the exhibition by the now Los Angeles-based Coppens. These wearable objects are informed by the artist’s unique background at the intersection of couture and performance, and present surreal observations and commentary on his recent relocation to Los Angeles from a European perspective. Having created some of the most haunting and at the same time remarkably beautiful creations, which represent the country they portray in a way which will leave an undisputed (ever?)lasting impression on its spectator.

Coppens on what drove him in his creations:

I’ve been raised with American culture and pop culture, but now that I’ve been living here for three years I see so many faces, so many layers. These masks accompany my journey, far from home, making a new home in a place that feels so familiar and yet so incomprehensible.

Coppens is no stranger of dramatically impressive creations, as theatrical masks have figured prominently as recurring themes and formal structures in the Belgian’s largely fashion and theater based career. He has made them for couture shows, theatre, and musical artists. Yet he also created costumes and accessories for Irish singer Roïsin Murphy’s 2008-2009 world tour and made twenty masks for her more recent 2015-2016 tour. Coppens is fascinated by the mask as a physical metaphor. A performative extroversion of interior and symbolic experience, it becomes a physical manifestation of identity and affect:

For thousands of years, masks have played an important role in rituals, religion and the performing arts. What could be the role of masks today? Disturbing or grotesque, beautiful or intriguing, you could use a mask to express yourself, share your opinion, create a new identity, hide behind it or wear it as a mirror to reflect what’s going on inside your mind and soul.

Initially trained as a theater director, Christophe Coppens started his own label as an accessories designer at the age of 21, a career that would span over 20 years. In 2010 he was named Royal Warrant Holder in Belgium, a recognition that came after more than 15 years making accessories for the Belgian Royal Family. He has opened outlets in Belgium and Japan, presenting his collections twice a year during Fashion Week in Paris and Japan. He has worked on fashion show collaborations for renowned designers such as Manish Arora, JuunJ, Guy Laroche and Issey Miyake and has created memorable performance accessories for pop stars including Beth Ditto, Grace Jones, Roïsin Murphy, Rihanna and Scissor Sisters.

In 2012, Coppens’ label was sold in 140 shops worldwide and he had become arguably one of the most important milliners of his generation. After 21 years of making work on the edge of art and fashion, Cop- pens decided to close his company to focus exclusively on his work as an artist, experimenting with a variety of media. Since then, Coppens has worked on four different solo art shows, traveling to Tokyo, New York, Belgium and The Netherlands, including the prestigious Boijmans Van Beuningen Museum in Rotterdam.

All imagery courtesy of Please Do Not Enter and the artist.

Make sure to follow Please Do Not Enter here