“What art does — maybe what it does most completely — is tell us, make us feel that what we think we know, we don’t. There are whole worlds around us that we’ve never glimpsed.” Greil Marcus — Monday October 13th — 12:36 (CEST) —

I love listening. It is one of the only spaces where you can be still and moved at the same time. — Nayyirah Waheed — Monday October 13th — 12:36 (CEST) — 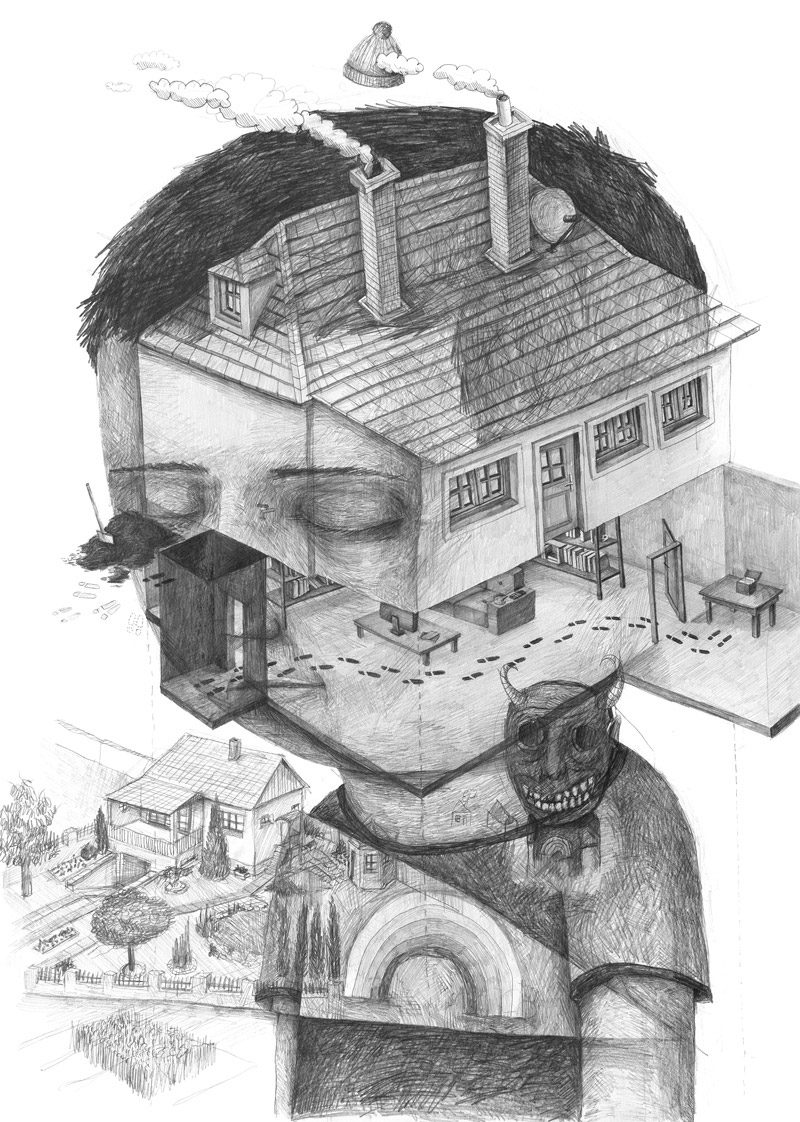 The Austrian-born and -based illustrator Stefan Zsaitsits creates highly fascinating dark pencil drawings of childlike figures in which he oftenly seems to hybridize particular thoughts and emotions directly on or with the body part which is involved, mostly the head. And even if he chooses to portray his subject in a more traditional fashion, one can always observe that sense of astonishment combined with a touch of fear. The results are surrealistic and sometimes even slightly repulsive raw images, which evoke a sense of unsettlement, clearly representing the unfiltered stream of thoughts one mostly finds within the disclosure of the world in all its beauty and hardships during childhood. And although most people lose that particular perspective on the world with the years, Zsaitsits rightfully seems to question if growing up inherently has to mean the end of sincere astonishment, despite the fact that most people choose it to be the case.

It´s reflecting on childhood in common, growing up and questioning if something like growing up really exists.

Stefan Zsaitsits was born in 1981 in Austria. After his studies at the University of applied Arts in Vienna, from which he graduated in 2006 he has slowly been expanding his body of work carrying his specific signature. His work has been exhibited on several locations throughout Austria, mostly in Vienna. His incredible graphite head portraits were most recently on exhibit at Galerie Lang Wien and Art Austria 2014 and to underline the growing acknowledgement of his talent: this year the artist received the Art Austria Award. His work has been published in the book ‘Der Hals der Sängerin’ of Austrian writer Barbara Frischmuth by Edition Thurnhof and the artist self-published a book with works from 2010 and 2011 named ‘Kopfgesänge‘ or ‘Headsongs’. Artist Manfred M. Lang in its foreword:

They are faces, that often hide behind something rather clumsily – faces that are overdrawn by eyes and/or symbolflies – faces overgrown by plants or pencil-strokes – smallfaces forming a new delusion-face – faces sunken in sea and clouds – masked faces – mouth-lost faces.