I love listening. It is one of the only spaces where you can be still and moved at the same time. — Nayyirah Waheed — Wednesday August 11th — 10:44 (CEST) —

“What art does — maybe what it does most completely — is tell us, make us feel that what we think we know, we don’t. There are whole worlds around us that we’ve never glimpsed.” Greil Marcus — Wednesday August 11th — 10:44 (CEST) —

In the 5th issue of Journal de Nîmes we already showed you a few ways of knotting your tie and folding you pocket square. Since the day we made the illustration I was focused on ties and since than I saw them everywhere. We’ve made a little list of our todays favorites and my former intern Mia Porter put together a nice article, sourced from wikipedia and all over the place and came up with this. A ‘little’ history of the tie, which goes back to the mid 17th century, and our favorite ties in a row.

To start with a little list of our today’s favorite ties:

Different knots
The “four in hand” knot gained its name from its resemblance to the reins of the four horse carriage used by the British upper class.
The Shelby knot or the Pratt-Shelby knot was invented by Jerry Pratt, an employee of the US Chamber of Commerce. He had been wearing his tie in the Pratt knot for some twenty years before it became popular after TV personality Don Shelby wore it on air. The New York fashion press mistakenly attributed the invention of the knot to Shelby. It uses less length than the Half Windsor or Windsor knots, and so is well suited to shorter ties. Unlike the Four in Hand knot, the Pratt method produces a symmetrical knot.
The Windsor knot, also sometimes referred to as a Full Windsor or a Double Windsor to distinguish it from the half Windsor. The Windsor knot, compared to other methods, produces a wide symmetrical triangular knot. The knot is often thought to be named after the Duke of Windsor It is, however, named after his grandfather Edward V11. The Duke preferred a wide knot and had his ties specially made with thicker cloth in order to produce a wider knot when tied with the conventional four in hand knot. The Windsor knot was invented to emulate the Duke’s wide knot with regular ties. The Windsor knot is worn on more formal occasions, and it is especially suited for a spread or cutaway collar that can properly accommodate a larger knot.

The half-Windsor knot produces a neat, triangular knot. It is larger than the four in hand knot and Pratt knot but smaller than the Windsor knot. Despite its name, it is not half the size of the Windsor knot, and there is no evidence that it is derived from that knot. It works well with light- and medium-weight fabrics. 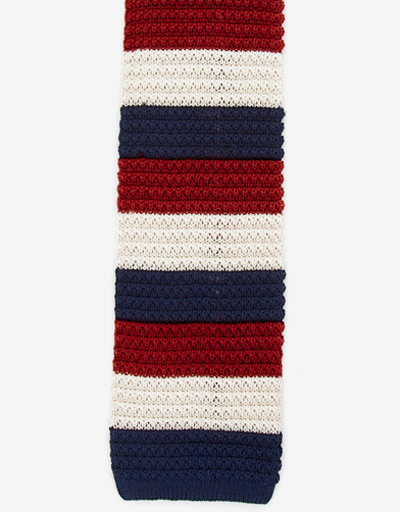