“What art does — maybe what it does most completely — is tell us, make us feel that what we think we know, we don’t. There are whole worlds around us that we’ve never glimpsed.” Greil Marcus — Thursday October 20th — 8:20 (CEST) —

I love listening. It is one of the only spaces where you can be still and moved at the same time. — Nayyirah Waheed — Thursday October 20th — 8:20 (CEST) — 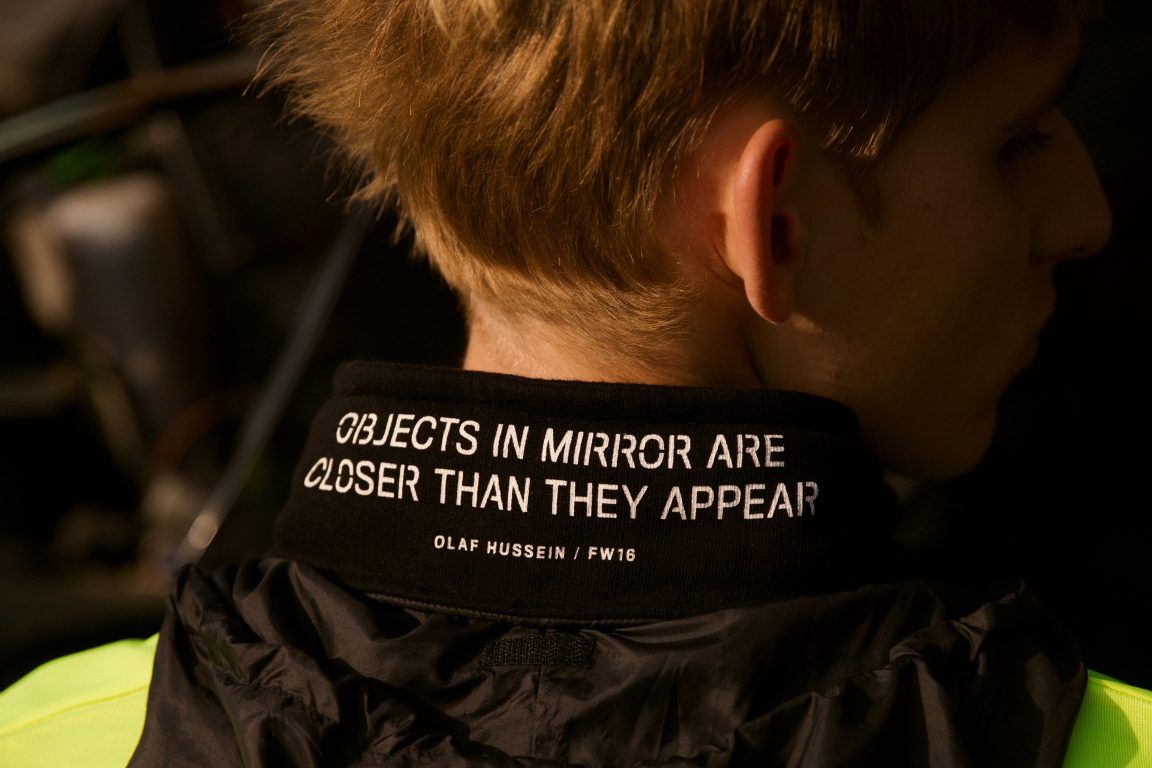 Six months have passed and our good friend Olaf Hussein has returned with a new seasonal offering, which will be available online and in his shop on the Prinsengracht 491 in Amsterdam from today. For his Autumn/Winter 2016 collection, the Amsterdam-based designer takes a trip to the deep South of the United States of America, or more specifically, to the world as portrayed in the iconic moody feature film ‘Paris, Texas’. This cinematic masterpiece from 1984, directed by Wim Wenders and shot by Dutch cinematographer Robby Müller, forms the main inspiration for the new seasonal creations. Where Hussein’s former collection felt like the conclusion of the starting period of the brand, which asked for the (successful) establishment of his name (literally) — the new collection shows a new kind of ambition in the products being released under the OLAF HUSSEIN label, going beyond the earlier (necessary, no doubt) road of prominent branding into the realm of, what we feel are, interesting contemporary pieces marrying technical features and sharp minimal silhouettes.

Next to the pieces itself, the imagery created to communicate the Autumn/Winter 2016 collection proves to be our undisputed favorite lookbook till date. The brand continues its on-going collaboration with the very talented Amsterdam-based photographer Carlijn Jacobs and premiers a collaboration with Paris-based Dutch top stylist JeanPaul Paula, who infuses his extraordinary talent to create highly contemporary athletic-inspired looks throughout — the two creatives combined truly bringing the potential of Hussein’s creations to the next level.

The collection takes its cues from the tougher aesthetics of the true Americana that lies at the center of the movie. From car culture, to wide-open vacant spaces and long winding roads. It’s a feeling that returns in the collection through faded colors, classic heavyweight cotton utilized inside-out and durable fabrics such as ripstop.

With the introduction of the beautiful ‘Rusty Red’ baseball cap, adding to the existing styles, the new collection honors its biggest inspiration as a direct reference to ‘Paris, Texas’ main character, Travis Henderson. Another new new step to be observed –following last season’s introduction of the OH! moniker, returning in a smaller form on the chest of a mock neck— is a new expression for this season (in line with some of their more trendy peers from the world of street wear brands) through the side-mirror inspired title Objects In Mirror Are Closer Than They Appear, which in combination with the whole visual language created for the collection actually succeeds in being witty (which can’t be said for most of those peers) and the license plate-inspired emblem 0L4F-0H featuring prominently on one of the sweaters.

Another step forward for Olaf and his team!