“What art does — maybe what it does most completely — is tell us, make us feel that what we think we know, we don’t. There are whole worlds around us that we’ve never glimpsed.” Greil Marcus — Tuesday May 18th — 22:21 (CEST) —

Early this year Midlake’s new album The Courage of Others was released. The first time I listened to it I heard a somewhat simpeler and darker sound than on its predecessor The Trials of Van Occupanter. But, as always, the album grows on you after a few listens, and although it became clear that in this album I would not find as much complexity in the structure of the songs, complexity can still be found in the density of the layers of sound, carefully shifting over each other, building up to a climax or peeling off like on onion, slowly exposing its core.

Evolution of sound
Listening to the sound of the three full lenghth albums Midlake produced, there is a clear evolution to be heard. I cannot help to keep thinking of Radiohead when I listen to Bamnan and Slivercork, their debut album recorded in 2004. But no one can beat Radiohead in their own style. Midlake sounds a bit fragile still, searching for their own unique voice, but without a lot of courage.
They managed to find that voice in 2006 with the release of The Trials of Van Occupanther, the record that made them big. The songs at first half of the album are up-tempo and solid, yet lighthearted. It is a record full of beautiful songs, and one that l listened to many times. Now with The Courage of Others the band sonically matured and the voice of lead singer Tim Smith is the voice of a grown up man, aware of the state of the world he is living in. 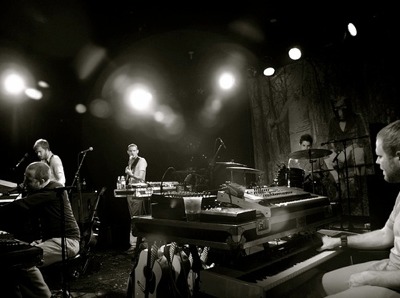 Some of my friends saw Midlake play live earlier this year at Paradiso (Amsterdam), and met the band in a bad shape. The sound was not mixed well and the guys were tired. Luckily, their concert at Tivoli (Utrecht, NL), was much better. At first they seemed a bit timid, and I know some people have to get used to the image of two bearded men playing the flute, but during the concert the energy of the music and the audience charged the group and resulted in a serious, but passionate show. And while four guitar players on stage might seem a bit excessive, the sound was very well balanced, all layers woven together gently.