I love listening. It is one of the only spaces where you can be still and moved at the same time. — Nayyirah Waheed — Tuesday November 15th — 11:18 (CET) —

“What art does — maybe what it does most completely — is tell us, make us feel that what we think we know, we don’t. There are whole worlds around us that we’ve never glimpsed.” Greil Marcus — Tuesday November 15th — 11:18 (CET) — 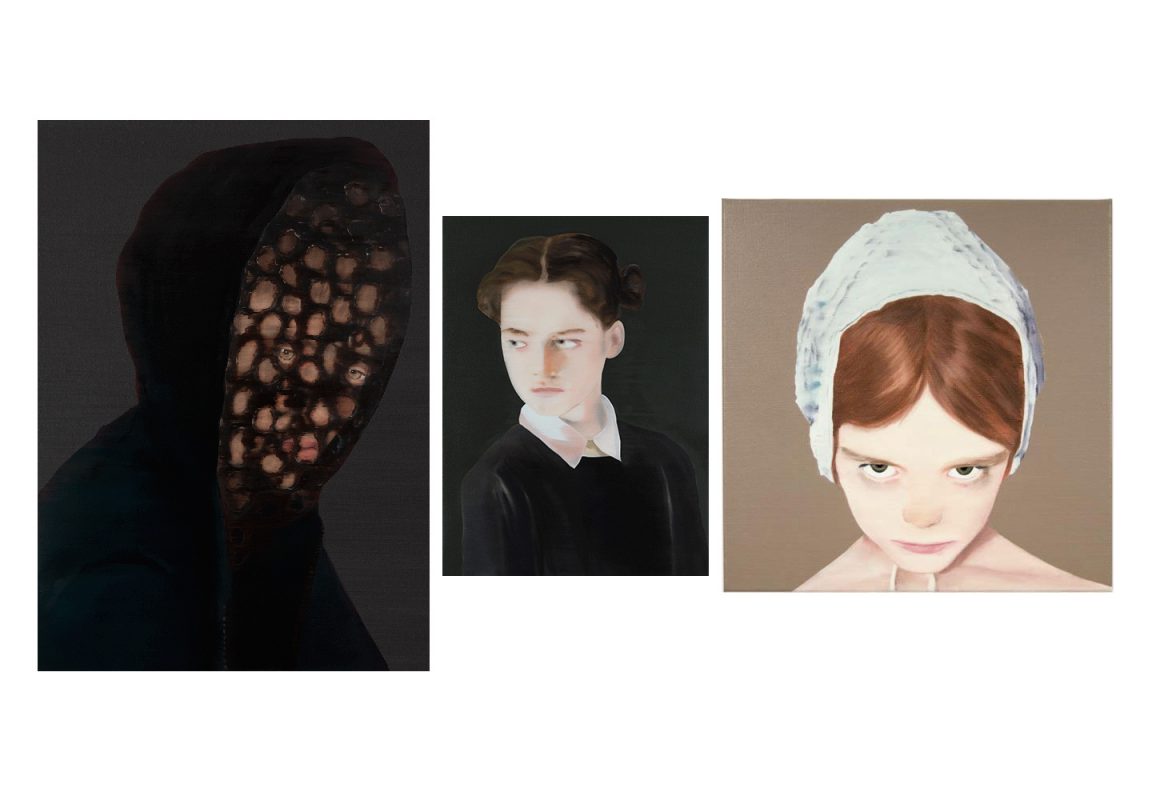 This coming Friday, the doors of the beautiful Capital C building in Amsterdam will open for BIG ART. The exciting new initiative of curator Anne van der Zwaag presents over 50 XL artworks by contemporary artists and designers and will run for 10 days in what used to be the Diamant Exchange of the city. A unique mix of acclaimed names and upcoming talents, monumental paintings, drawings, large sculptures, big photos and huge installations. As one of the official partners of BIG ART we will present some of our favorite artists included in the curation of van der Zwaag. Starting with Rotterdam-based painter Katinka Lampe, with whom we discussed the democratization of the contemporary visual culture, the rise of artificial self-representation and how this is reflected back in her haunting distorted paintings of young human figures.

When did you start painting?

I started in the early nineties at the art academy in Den Bosch. After graduating, I have had several part-time jobs to get by, next to working on my paintings. At that time I was moving around a lot, always trying to find good affordable studios to still be able to work. At one point, I ended up in Rotterdam where I settled, having lived here for about 20 years now, working in a very beautiful studio.

Were you already working on portraits at that point?

I don’t see my paintings as portraits. The portrait is only the incentive to begin a work, but never the purpose. The representation of the model is the starting point, but who he or she is, does not really interest me. Through the appropriation of the representation, by adding different layers, I’m expressing my feelings about the world around us. I do this figuratively in this manner, inspired by the fact that the essence of human interaction is physical. We communicate by looking at each other, watching the other’s body language. That has always fascinated and inspired me a lot.

When I was younger, at the academy and the years after graduating, I was still very focussed on the medium of painting and less on communicating through my art. Working from a model has always been the bottom layer of my work, also then, but at some point I realized I wanted to go beyond just the representation. This resulted at first in a somewhat forced exploration where I could go in my work, applying direct symbolism that I felt would be readable by everyone. Eventually, I saw that I needed to let go of this restraint and just be free. Trust my vision and not worry about how others would interpret my appropriations. I lost my fear that people would not pick up on what I wanted to tell, which gave me the confidence that my images are independent, good images.

I don’t see my paintings as portraits. The portrait is only the incentive to begin a work, but never the purpose. The representation of the model is the starting point, but who he or she is, does not really interest me.

So your paintings are representations of the models, appropriated as an icon for the story you want to tell?

I find inspiration for my work in imagery that moves me: in the newspapers, magazines or on the internet. When I have found such an image, I let models reenact those scenes in the studio, which I photograph. Here my ownership of what used to be a public image starts by using Photoshop in altering the photograph in the way I seem fit. This image becomes the foundation for a painting. It’s never about the person that is being portrayed; what kind of character he or she has.

Thematically I am concerned with society, things like racism or the hyper-medialization in which young generations are growing up nowadays. But, I never force these readings of my work upon the spectator. It is only to be found in the contextualization. My aim is primarily to create captivating images that are able to hold a glance. Meaning lays in the eye of the beholder.

What fascinates us particularly at the moment is today’s democratization of the visual culture and the effects of that development. Has your vision on the world as a painter changed in last 15 years?

It has become very hard to know anything about the authenticity of an image, but I actually consider that as a very exciting development. I’ve always been occupied with the construction and appropriation of imagery. So some of the developments that are happening now, are quite close to my practice as a painter. Originality as a concept is losing significance. I personally feel that is a very interesting development.

What, in my eyes, still distinguishes me from a lot of other imagemakers, who from a digital standard think that they are creating interesting images, is the craft that lays behind my images. That has, in my eyes, the quality to entice people to look at my work.

The craftswoman, who has been perfecting her technique for 20 years.

It is obviously not what is most important in my work, but I do feel that it’s a valid quality in today’s context that creates a relevance to seduce a viewer to spent his or her valuable time looking at my work. All those images that one encounters everywhere has drastically reduced the attention span of anyone subject to this new context. With my paintings I hope to still be granted some time. Get that extra moment of exploration. Evoke the question: what’s happening here? That’s why I aim to create a kind of clashing reality in my work, give it something strange. I am literally trying to grab someones attention.

With my paintings I hope to still be granted some time. Get that extra moment of exploration. Evoke the question: what’s happening here?

Has your artistic vision been influenced by motherhood?

Yes of course. I have been living alongside the generation of my children, which has taught me many things I would not have seen if I hadn’t been a mother. I try to guide my children as much as I can, based on my own experiences, but my son of 20 and daughter of 14 are fully exposed to all these signals and incentives from their smartphones. Some things are just very different, so to see them going through life has been an extraordinary experience for me.

I also often use my children as models. With them I absolutely don’t have to worry about the way how their portraiture will end in my paintings. They trust me completely and know very well what will happen in the appropriations I apply, regardless how provocative that sometimes can be. They know I’m not portraying them as a person. With other models this sometimes still raises some questions when a work is finished.

Another important element of contemporary visual culture is the rise of artificial self-representation, through the use of Photoshop and contouring makeup, but even the faces people make when taking a selfie can be rather unnatural.

It’s funny that you mention that. I mainly paint young people, because elderly have more lines and wrinkles and therefore their faces inherently evoke more stories. Young people are easier to ‘mold’ towards what I want to tell. When I’m painting, I constantly immerse myself in these young and flawless aesthetics, which sometimes makes the truth of me personally getting older a bit of a shock. Reality can be a little painful sometimes, but this is nothing new I suppose.

What has changed is that I see children as young as 12, or maybe even younger, that are already constantly measuring themselves with what they encounter about others on the internet. That definitely has an effect on how you see the world around you. It becomes pretty superficial if it’s only about beauty and talent. I think it’s safe to say that becoming famous is more accessible than ever and therewith also the wish of children to become just that. That is a far cry from what I was occupied with when I was growing up. The new situation will have an effect sooner or later, but what that exactly will be is hard to say.

In a way, as a portrait ultimately still is the core representational layer of what you want to tell with your individual paintings, your work was giving an entirely different frame through all these developments in the last decade.

Indeed, but I also actively implement that into my work. At BIG ART I’m showing one painting out of a body of work which is directly inspired by those YouTube vlogs where young people ask the viewer: “Do you like me?” and after having changed their hairstyle or makeup: “Do you like me now?”. I created an exhibition inspired by that phenomenon named ‘Do You Like Me Now?’ at my Amsterdam-based gallery Ron Mandos. One of those works will be on display at BIG ART, a particularly large one of two girls.

These girls really embody that sentiment of the videos, posing as if their life’s depended on it, looking directly in the spectator’s eyes. The work is like a statement shouting: watch us here now! You can’t get around their questioning piercing gazes. This not natural behavior of course, it’s all conceived through their need for confirmation. Sometimes it seems that these kind of girls think very highly of themselves; about their great lives, being more beautiful than others, but I always wonder whether they actually feel that way or only act that way by the grace of the positive feedback they get from, mostly, strangers.

It still fascinates me profoundly how people are influenced by imagery and what it evokes in them, as it did when I started painting. That this has changed radically in the last 15, 20 years is something I try to convey in my work.

All images courtesy of the artist and Galerie Ron Mandos.

For all information and work by Katinka Lampe see here

BIG ART will take place from the 19th of November until the 27th of November in the iconic Capital C building located in the Diamantbeurs, Weesperplein 4 in Amsterdam.

For all information on BIG ART see here