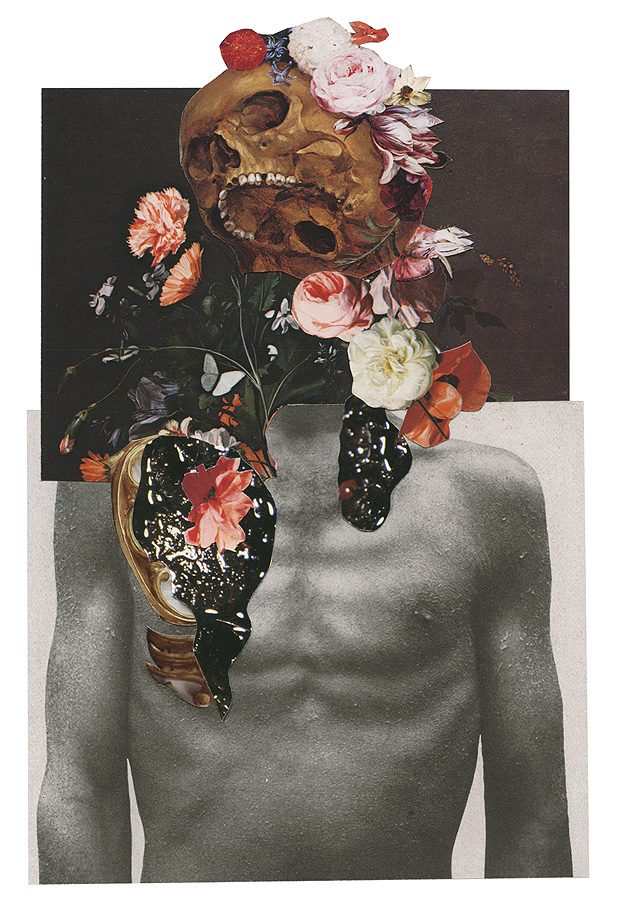 After premiering the first half of Ashkan Honarvar‘s ‘King of Worms’ last week, we now present a selection of the second half of the biggest project till date created by the Norway-based visionary. Ashkan has been producing collages for almost a decade now, both under his own name as the pseudonym Who Killed Mickey, always finding inspiration in the dark side of humanity and from the questions that rise about it. The extraordinary new project is no different; consisting of 107 collages, divided in 10 chapters with a unique aesthetic, although undeniably marked with Honarvar’s signature style. Today we ask him about that particular style and  his vision, inspirations from the dark side, Jane Arden’s film ‘The Other Side of the Underneath’ and how he translated this into a major work like ‘King of Worms’.

After having been born in Iran you relocated to the Netherlands at a young age, where you studied illustration at the art academy in our hometown Utrecht. Now a days you have been living in Norway for some years, but you have grown into adolescence in the Netherlands. How do you believe that has that been of influence in your vision and the work your create?

A lot I think. Freedom to express myself is one of the biggest advantages of living in country like The Netherlands, where you have freedom of speech.

In an interview some years ago, right after graduating from the HKU University of the Arts, Utrecht – in the period in which we first encountered your work – you stated that you create from your intrinsic fascination for the dark side of humanity, in order to gain more understanding of it. You stated not to create for the spectator, but rather for yourself. Has this changed after years of creating work?

This has actually intensified over the years. How deeper you go the more questions arise. I still use my work to ‘answer’ the questions I’m asking about humanity ‘us’. And to be honest I don’t think I would be interested to create anything if I didn’t have any questions to ask.

Do you believe you’ve gained more knowledge of the evil within humanity after all these years of – in your own words – almost scientifically researching it?

Yes, certainly. I found out that there is no clear answer for this subject, but more likely parts that could be connected for better understanding of ‘evil’ in human beings. And every time I think I have it, then I discover another source material or opinion that reset my whole thinking. Like right after finishing ‘King of Worms’ I discovered another philosopher that just blew my mind and my next project will be dedicated to him completely.

One has to say, with the recent growing instabilities in the world order, your potential field of study has been expanding significantly. Do you think the current situation within world politics has had an influence in creating you biggest work till date, ‚King of Worms’ or is that rather a matter of your personal growth as an artist?

I think both. Current world politics are definitely part of this project. At the start I knew I wanted to create something connected to what is happing now in the Middle East. Like with the terror group ISIS. And at the same time finding connections with Jane Arden’s movie ‘The Other Side of the Underneath’.
And from an artistic point of view I think when the subject ‘questions’ become so complex then the answers have to be precise. So that is why this project became so huge in size, I think.

Getting into ‚King of Worms’; you have stated that a quote from Jane Arden’s ‘The Other Side of the Underneath’ formed the main inspiration for the project. What were the associations sparked by Arden’s iconic film?

I think the most important one was about the corruption of power and the misuse of it. The movie itself is like a nightmare and for the majority of it the characters in the movie are on acid. The movie doesn’t clearly state what it means and that leaves room for owns interpretation.

And how did you go about translating that to ‘King of Worms’? Is this the usual way that you create work or was there something special in this process?

Before I start with a project which is this complex, I always create a mood board, in this case based on the Jane Arden´s quote from ‘The Other Side of the Underneath’. The most important part here is association and symbolism. For me these two factors are the building stones of collage art. And a mood board that pinpoints these is very crucial for my workflow. They make it easier to find your way back every time you don’t know what to do or where you are. This way of working is actually new for me.

Where did the structure of breaking the story you wanted to create down to 10 chapters come from?

All the separate chapters are directly connected to the original mood board (see the last image in the carrousel) used for this project. It actually grew organically into 10 chapters and wasn´t planned beforehand.

How did you find the individual choices for the chapters? Have the individual image elements a layer of meaning beyond how you juxtaposed them within the collages or is is there another motivation for your choices of the base layer?

Almost every form and layers has a meaning in this project. Nothing is there by accident or just because it makes the image look better.

What are your plans for the future for ‚King of Worms’, are you planning to exhibit it in any way? If so how would you ideally do it?

Yes, part of this project will be on display at CES Gallery in Los Angeles soon during a group exhibition.

And beyond just ‚King of Worms’ you recently teased a highly interesting new project in fashion, what else is coming up in the near future?

The fashion collaboration with Lara Quint is going to be amazing. I’m so excited for that. Furthermore at the moment I’m researching and reading a lot for my next project, but more about that very soon..

To finish off, asked to a specialist of the dark side – is there any hope for humankind?

Haha, yes of course! We just have to make sure not to forget our mistakes in the past..