“What art does — maybe what it does most completely — is tell us, make us feel that what we think we know, we don’t. There are whole worlds around us that we’ve never glimpsed.” Greil Marcus — Monday May 11th — 11:25 (CEST) — 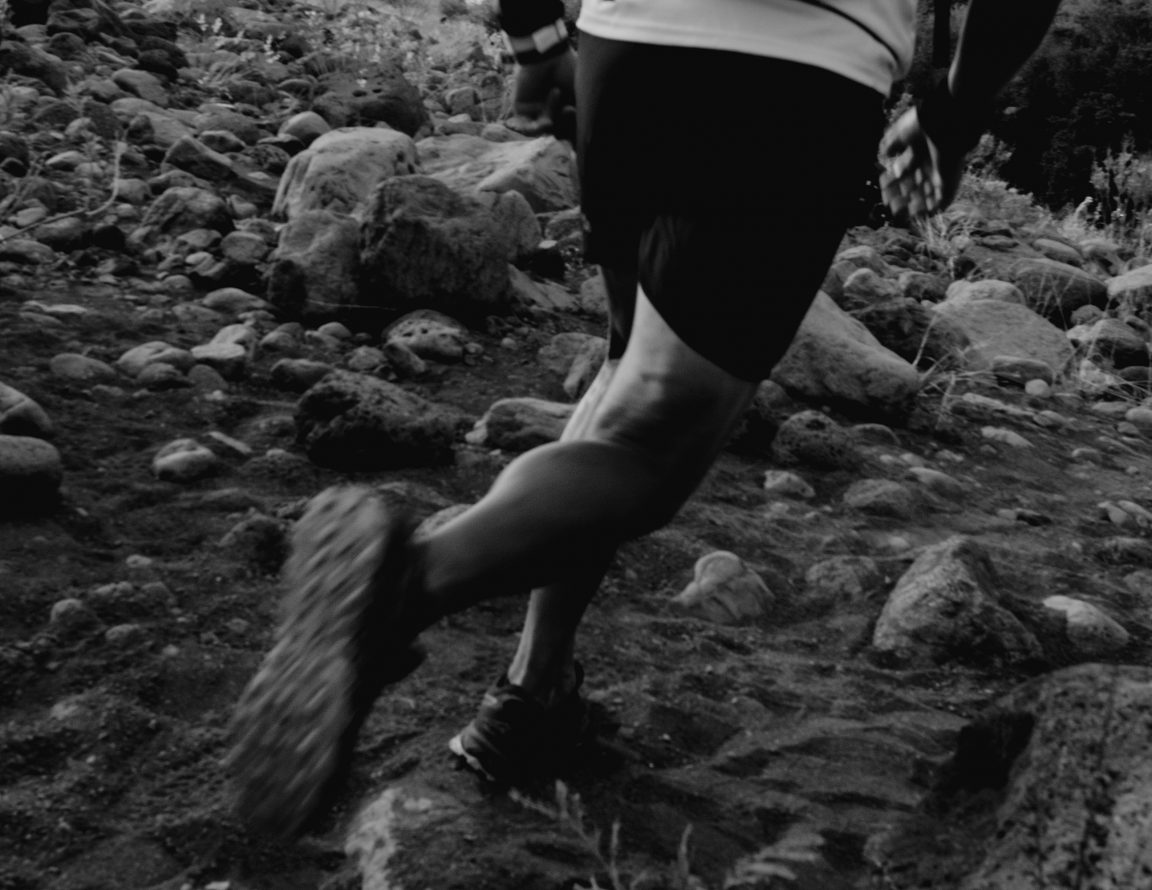 Last year the Paris running shop Distance published their first book called ITEN by photographer and artistic director Thibaut Grevet, with the aim to produce a singular vision of some of the world’s most emblematic places related to running and its culture. Earlier this year they published their second book, now in collaboration with photographer Wendy Huynh. A beautiful hardcover with 170 pages filled with images shot on Reunion Island during the incredible Grand Raid or Diagonale des fous. We asked Yoann Wenger from Distance for a little Q&A with Wendy on how the book came about.

Yoann Wenger I’m going to play the real journalist here and ask the annoying questions: did you have some sort of “pressure” making this book and did the first volume influence your approach?

Wendy Huynh Of course I felt a bit of pressure as I love Thibaut’s work and what you guys have done for ITEN! But I tried not to look too much at the first book before the trip so I don’t get influenced by what has already been done. What I found challenging was actually the production of the shoot, the research and venturing on a trip which felt like a step into the unknown. Some of the stories in the book were quite specific which made it easy to plan but most of them were pure documentation, so it was a bit stressful not knowing if you’ll be able to get what you want or have in mind… I guess that’s also the exciting part of documentary! How did you come across the idea of going to Reunion Island for La Diagonale des Fous?

YW I’m not too sure but I remember the name of the race really stuck with me. “La Diagonale des Fous” isn’t a common name and I’ve heard some sort of legends around it, having this mystic vision of the race in my head and the scenery… I then stumbled across a documentary about it on French TV featuring François D’Haene winning hand-in-hand with Benoit Girondel in 2018. At that point I wasn’t working with Guillaume and Distance yet, so I would have never imagined documenting the same race with one of these two athletes!
We knew we wanted to do a second book about trail and somewhere exotic; it was a long debate within the team. First, we thought of going to the Mont Blanc for the UTMB but then Reunion Island just felt like something more special. After debating for a while, I suggested the book could be called “FOU”, the title was so impactful we all agreed it would be a good one! You were never really into running or trail running when we started talking about FOU. It’s great you started getting into it as a preparation for the book. I remember telling you to prepare but I didn’t think you would actually do it!

WH I did sign up to my local gym the day after you first mentioned Reunion Island! Initially I wanted to train to build strength and endurance so I could physically follow the race. It was quite challenging at the beginning, especially running outdoor but I eventually ended up loving it; I participated in my first 5K race, and signed up to the Hackney Half marathon (now postponed). What really pushed me was training for a precise goal and to better understand the athletes I was going to follow and photograph. Obviously not comparing myself to an athlete, but it gave me a clearer image of their mindset: dedicating time and effort to train in order to achieve a specific challenge, goal and/or time. Although Le Grand Raid is not just a typical race but an ultra-trail race of 166km long with a positive climb of 9,600m. These athletes are crazy (they are actually called les ‘Fous’ meaning the ‘crazies’ in French) who have been training for years to participate in this race or to even finish it! Did you also think running felt a lot easier when we came back home after having documented Le Grand Raid and seeing what these athletes have been through?

YW I feel lucky to have travelled to many places for our pop-up stores during the marathons and for this project. And every time I come home I feel like running would be easier, that I’ll become a better runner although I still haven’t seen the results! During the trip we’d prepared the whole week telling ourselves we should get some rest on certain evenings to make sure we were ready for the start of the race. But when did you realize that it would be a tough shoot, is there any specific moment you recall?

WH The early morning in Cilaos, where the first athletes were about to achieve 65km. That was the first night we spent in the car and I remember waking up with dry contact lenses, freezing cold– there is a wide variety of microclimates in Reunion which means you go from dry to humid weather, through hot and cold temperatures. It was still at the early stage in the race but already felt so tired, not to mention what the athletes were actually going through during this time. The landscape was stunning though, this strong orange sunlight on the mountain was probably one of the most beautiful sunrises I’ve ever witnessed. You and Guillaume were the ones driving the whole time on the island and driving was a hell of an experience there… Do you remember the drive the night before?

YW Yes, that was when we witnessed Benoit quitting the race which was the hardest time on many levels. We met with Benoit and his team at his place when we arrived on the island, followed him during his press conference and prep – our whole schedule was based on him and we really felt like we were part of the team. Driving from St Pierre to the first 25th km with walkie-talkies between our car and his assistance team felt like a mission and the adrenalin was pumping. But abandoning was tough for him emotionally which also put us in a difficult position in terms of documenting it – should we capture this moment which shows a true side of sport or should we just leave him and his team alone? It was 1AM when we went back to the car, wondering what we should do from now on. Since we had Benoit’s predicted times at the different checkpoints, we thought we would just stick with them and follow the top three athletes. With the radio on in the car and everyone wondering what happened to Benoit, we drove for about two hours and a half to Cilaos on this famous mountain road called the 400-turns. There actually are 400 turns with no lights and driving like this at 3AM is exhausting. But I quite liked it, that was the kind of experience we came for! What was your best “adrenalin” moment during the race?

WH Definitely the start of the race. Le Grand Raid is probably one of the most intense ultra-trail races in the world and you can feel Reunion Island is proud of hosting it. Thousands of supporters, families and locals gather at the start of the race. The streets are full of musicians, dancers and every corner smells like meat grilling on barbecues. The race starts at night at 10PM but the island never felt so awake. When they started the countdown my heart was beating so fast as if I was behind the starting line. It left me feeling anxious, excited, stressed, scared. Can you imagine how the athletes were feeling at that time?!

YW What did you find interesting and powerful about documenting such a competition? You usually document life in cities and/or fashion. This is a completely different exercise, how did you feel about it?

WH That definitely was a complete unique experience and probably one of the most challenging projects I’ve ever worked on. An ultra-trail race isn’t like a marathon – athletes are not running, in fact most of them are walking, it’s a lot slower which I found challenging. You have to constantly make sure you were at the right place at the right time if you wanted to capture a specific competitor as the time differences between can be vast. The challenge of this race is to finish it rather than beat a time and at the same time it’s a collective effort – athletes take the time to thank you when you encourage them, some of them even arrive hand in hand at the finish line. Le Grand Raid really changed my vision on sport. What I also found interesting was the athletes’ background, most of them are not professional, they each have a ‘normal life’ back home (the 2019 champion Gregoire Curmer works as a chef in a Chamonix restaurant) but for a few days they were the queens and kings of the island.

YW A word about Jessica Pichet who worked on the graphic design for this volume, can you explain to the readers how did you two met and how important she was in the process?

WH Jessica and I met in London two years ago on a Facebook group where she was looking for a room and I was looking for a new flatmate. We didn’t end up living together but became great friends since! I initially showed her the photos of the book to get her opinion and she ended up designing the book which I’m so grateful for. She has a great sense for telling stories through imagery and helped me narrate the book so well even though she wasn’t on the trip with us. I was editing the pictures according to the layout of the pages, with a lot of back and forth. It was the first time I worked that way which allowed the editing process to feel more organic and helped me to greater understand their context and place within the book as a whole.
Thanks again for getting me involved in the project, looking forward to the next one!

Make sure to get your copy of the book here >