“What art does — maybe what it does most completely — is tell us, make us feel that what we think we know, we don’t. There are whole worlds around us that we’ve never glimpsed.” Greil Marcus — Friday March 25th — 12:00 (CET) — 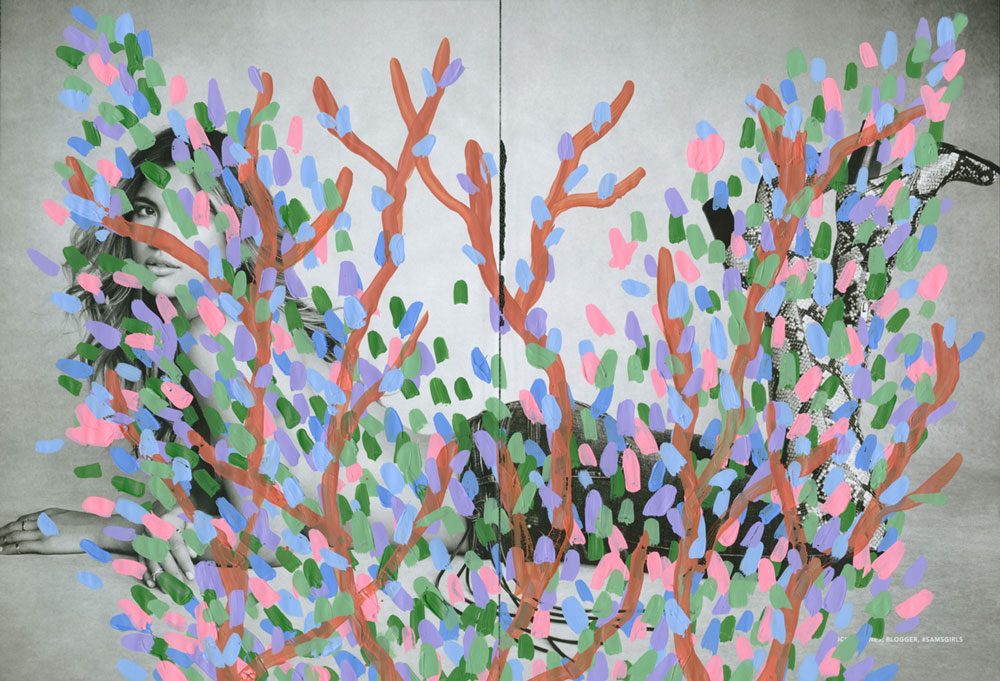 After we wrote about the inspirational ‘Ceasefire‘ show by Pryce Lee at The Garage last Summer, the new upcoming show by the ambitious gallery is another reason to visit the beautiful 17th century carriage house in the canals of Amsterdam. With the show named ‘The Fashion Pages’ The Garage will present the international premiere of the latest body of work by the renown New York City-based artist Michael De Feo. The new series were created atop fashion editorials and advertisements and stems from De Feo’s recent takeover of the ad spaces of New York City bus stop shelters, with many of the photographers, models and brands involved applauding his unlawful ‘collaborations’. Through his floral interventions De Feo transforms these images and the models within, blurring the line between unsanctioned and authorized works, which are both as aesthetic as subversive, forming a beautiful constructive statement in the overload of content one encounters these days. When in Amsterdam, make sure to not miss this when it opens on the 8th of April!

With ‘The Fashion Pages’, Michael De Feo turns the icons of our time into ethereal creatures, inviting the viewer into the floral world he cultivates.

Best known in the street art movement for his iconic flower image, Michael De Feo has created unsanctioned works on the streets in over 60 cities from New York to Hong Kong over nearly 25 years. His most recent street projects are takeovers of fashion ads in NYC’s bus stop shelters. His current studio practice reflects his interest in the world of fashion by painting atop images he sources from magazines. These works highlight the blurred line of illegal intervention and sponsored partnerships like his recently designed line of women’s accessories for renowned New York brand Echo launching Spring ’16. Other fashion projects include a takeover of Neiman Marcus’ April catalog ‘The Book’ and an influencer campaign for Christian Louboutin.

De Feo’s work has been exhibited in galleries and museums around the world, including The Aldrich Contemporary Art Museum in Ridgefield, Connecticut, Museo de Arte in San Juan, The New Museum, Colette, Stolen Space in London and Macy’s famous Thanksgiving Day Parade. His work has appeared in a variety of film docs including Alice Arnold’s To Be Seen, screened at The MoMA in 2006 and Banksy’s Academy Award nominated ‘Exit Through The Gift Shop’ (2010). De Feo’s work has been featured in The NY Times, Time Magazine, The London Sunday Times Magazine and three times on the cover of New York Magazine’s ‘Reasons to Love New York’ issue as well as appearing in nearly 40 books.

All images courtesy of Michael De Feo and The Garage Amsterdam.

‘The Fashion Pages’ opens on Friday the 8th of April from 18:00 – 21:00 and will be opened the following two days from 11:00 – 18:00, subsequently the gallery is opened by appointment. The Garage is located at the Brouwersgracht 75 in Amsterdam.