“What art does — maybe what it does most completely — is tell us, make us feel that what we think we know, we don’t. There are whole worlds around us that we’ve never glimpsed.” Greil Marcus — Sunday April 25th — 20:30 (CEST) —

I remember the excitement of going to the record store as a young boy to buy the newest album of one of my favorite bands (most probably a piece of remarkably heavy rock music, knowing my taste at that time), and the feeling of disenchantment when I came home and discovered how my favorite group decided to try something new, to go a different direction, to make music in another style than the one I loved them for. At that time I did not understand the necessity of artistic evolution. There was no need for that much change in my world.

Fifteen years later I listen to the three studio albums Efterklang released, and I am surprised about how they changed over the course of six years, yet still they communicate the same musical idea and most of all, I hear the same passion and integrity in Magic Chairs, their newest work, as I heard in their debut album Tripper. 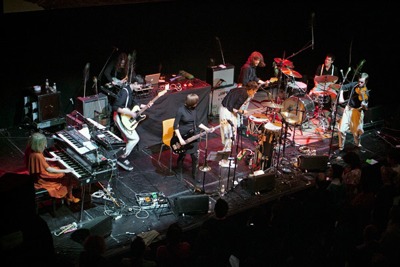 Made to be played live

Efterklang (the name is Danish for remembrance or reverberation) was formed in 2000 in Copenhagen, Denmark.  It took them four years to release their debut album, Tripper, in 2004. For me, Tripper was one of those albums that sit in your library, waiting to be discovered. I liked it, but had only played it a few times without paying much attention to it, without really listening to it.

After the release of their second full-length album Parades (2007), I saw them play live at the Motel Mozaïque festival, and the performance was striking. While Efterklang consists of four core members (Caspar Clausen, Mads Brauer, Thomas Husmer, and Rasmus Stolberg), they always bring a lot more musicians on stage. The overall feeling of the concert was highly energetic and the band members played and sung together with visible joy. A great experience for the audience and while Parades is a good record, I miss the energy of the concert when I listen to the album. It seems like it really is made to be played live, much more than their first album Tripper.