I love listening. It is one of the only spaces where you can be still and moved at the same time. — Nayyirah Waheed — Monday November 2nd — 10:15 (CET) —

“What art does — maybe what it does most completely — is tell us, make us feel that what we think we know, we don’t. There are whole worlds around us that we’ve never glimpsed.” Greil Marcus — Monday November 2nd — 10:15 (CET) —

The movie news of the year―at least on this side of the Atlantic―has almost wholly revolved around Spike Jonze’s filmic adaptation of Maurice Sendak’s seminal children’s book, Where the Wild Things Are, an innocent-looking 48-page essential that no good mother would be caught without. The big screen version of the generation-transcending classic is quite visually spectacular and emotionally moving (I’m not going to get into criticism or review here―The New Yorker’s for that), which is, not incidentally, what most Sendak fans assumed it wouldn’t be. (“How can you―and why do you want to―inject live-action life into a masterpiece of the two dimensional?” many asked.) The magical transformation from innocuous paperback to grandiose $100-million-dollar-budget silver screen spectacle can be explained by noting the importance of a simple “a-ha” moment Jonze had several years ago upon splitting with his girlfriend Sophia Coppola: The Wild Things embody wild emotions (anger, fear, and loathing; happiness, exuberance, and excitement). The trouble-making director, along with one of this generation’s most lauded scribes, Dave Eggers, transformed Sendak’s bedtime story into an exploration of the most primordial feelings that unify us all.

Unusually, the film did not come attached with the usual Disney-style marketing package (numerous throw-away action figures, cheap pajamas, lunch boxes, video games, and so on), but rather a sort of grassroots call to (creative) arms. Where The Wild Things Are gave people the bug to simply create in reverential celebration of a seminal work of toddler fiction. Obviously, Jonze et al. had a roll in the development of these “extended value” efforts, but theirs was more of the warm, encouraging father than the demanding, out-of-touch boss. Read on for a rundown of some of my favorite objects that were created in concordance with the flick.

The Wild Things by Dave Eggers
In my opinion, Eggers is not only one of the greatest American novelists of today (his works include A Heartbreaking Work Of Staggering Genius and What Is the What), but also one of the most inspiring socially conscious individuals out there. The man founded McSweeney’s, an exceptionally literary independent book publisher that celebrates every talented writer around; started 826 National, a nonprofit organization that tutors children in need after school; wrote two books (What Is the What and Zeitoun), both of which were expressedly published for charities (The Lost Boys Of Sudan and the Zeitoun Foundation respectively); and still found time to co-write the screenplay for Wild Things, another one of his many acts of sheer humanistic passion.
Released on the same day as the U.S. opening of the film, The Wild Things is a novelization of the movie. The story is essentially the same with one big (obvious) difference: inner monologues. The Wild Things serves as a wonderful companion to the big screen adaptation in that it sheds more light on the nuances of the characters and Max’s dream world. It also works as an excellent young adult stand-alone read, both noteworthy for its curiously sophisticated tone (that’s what happens when a genius constructs fodder for a developing mind) and its life-affirming themes (kids and grownups alike have “wild things” inside them that can never―and should never―be squelched or denied).

Huck magazine cover story
Huck, a U.K. lifestyle publication for the more scholarly amongst skaters, surfers, and slackers, did an extensive interview with Jonze for its December/January ’09 issue, the cover of which is graced with a Geoff McFetridge-penned portrait of the director with a costumed Max entering his mouth and perching on his shoulder while reading Sendak’s triumph. McFetridge, who did most of the preliminary artwork for the movie, also drew the cover for the November/December ’09 issue of Little White Lies, which is themed solely around Wild Things.

Where the Wild Things Are original soundtrack by Karen O. and the Kids
It’s a shame that more film scores aren’t made specifically for their films! Until the 1980s, that certainly wasn’t the case, but now, in today’s world of music-licensing-as-the-record-industry’s-future and brainless music supervisors, the bulk of what hits the silver screen is accompanied by is useless pop ditties.
Fortunately, Jonze had the guts and creative wherewithal to ignore this arbitrary convention. He enlisted the Yeah Yeah Yeah’s banshee chanteuse Karen O. and “the Kids”―YYY’s Nick Zinner, Brian Chase, and Imaad Wasif; Deerhunter’s Bradford Cox; Liars’ Aaron Hemphill Liars; the Dead Weather’s Dean Fertita and Jack Lawrence; and, presumably, a whole mess of actual kids―to compose Where the Wild Things Are’s musical element. The album isn’t incredibly good on its own, but when gulped down with the film, it’s spot-on. O.’s screeches serve as a sort of empathetic, unifying siren that “gets” Max. The music is all at once deeply ingrained into the life of the movie (for example, O. often screams in tandem with Max), and also detached like a friend who’s there to assure you that everything’s okay and whatever you’re doing is the right thing to do. (AS. Listen and read the review at Pitchfork)

Opening Ceremony’s Where the Wild Things Are collection
Opening Ceremony has become notorious for its courageous, impassioned collaborations with others like Penfield, Uniqlo, and Chloë Sevigny, but its Wild Things collection represents a new concept for the bicoastal boutique. With the help of several brands, O.C. developed a sort of patchwork line that includes animal-print Keds, handcrafted Pamela Love jewelry, and furry garments that both figuratively and literally pay their dues to Sendak’s work with a couture twist. 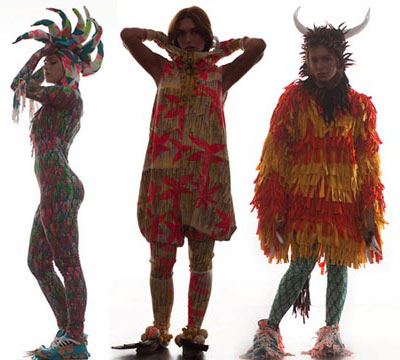 Christian Joy-designed costumes
Karen O.’s clothing (costume?) designer hopped on the bandwagon too with some truly mesmerizing Wild Things-inspired threads. Instead of using Jonze’s autumnal palette, Joy grabbed bright yellows, oranges, and pinks; in lieu of think and heavy fur, she selected confetti-looking materials that might’ve fallen off a piñata. The result is a festive reinterpretation of what we’ve come to know as the Wild Things.

Wild Things Kubrick figurines
The figurine collector in all of us can rest easy as Japan’s Kubrick released an eight-piece collection of Wild Things toys. Personally, I’m not much into the world of (often expensive) vinyl and acrylic figures, but the Lego-esque Kubricks are a hoot and certainly one of the cutest examples of Wild Things swag around.