I love listening. It is one of the only spaces where you can be still and moved at the same time. — Nayyirah Waheed — Thursday June 4th — 18:35 (CEST) —

“What art does — maybe what it does most completely — is tell us, make us feel that what we think we know, we don’t. There are whole worlds around us that we’ve never glimpsed.” Greil Marcus — Thursday June 4th — 18:35 (CEST) —

We love the concept of Edward Godden and Joseph Lewis's The Travelling Gin Co. And whether you are a football fan or not, which is kind of hard not to be in this period of time, the two Brits now present a new concept hoping everyone joining in embracing the wonderful international flavors highlighted by this summer’s World Cup in Brazil. The more Edward and Joseph explore and experiment in creating cocktails with their Travelling Gin Co. project, the more fascinated they become by the wide array of ingredients that are available in the craft of cocktail making which they translated into a collection of 32 drinks for the 32 Nations competing on the World Cup. [ Continue reading ]

Love on the Left Eye

Running only a couple more days in the Tokyo-based Taka Ishii Gallery: the beautiful exhibition named 'Love on the Left Eye' by 74-years old Japanese photographer Nobuyoshi Araki. The exhibition, Araki’s twenty-first with Taka Ishii Gallery, consists of 65 prints which have been selected from the photographer’s most recent work. The title of the exhibition refers to possibly the most famous Dutch photographer Ed van der Elsken’s 1954 book 'Love on the Left Bank.' When Araki was around twenty years old, he saw 'Love on the Left Bank,' and from a continued inspiration he now took photographs of women in poses inspired by the work of van der Elsken. 'Love on the Left Eye' therefore can be seen as an homage to van der Elsken, but also shows a very personal side of the Japanese photographer. Since October of last year, Araki has been largely unable to see out of his right eye due to a retinal artery obstruction, which is reflected directly in the right side of the photographs which are blacked out with magic marker. [ Continue reading ] 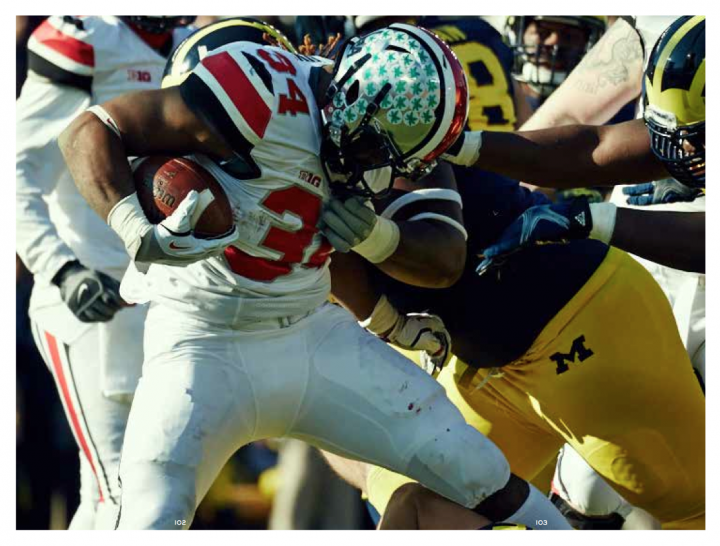 The beautiful biannual magazine Victory Journal was founded in 2010 by Christopher Isenberg, Aaron Amaro and Kimou Meyer in their hometown New York City. The magazine calls itself the new refuge of the true sportsman; unmoved by statistic analysis and provincial opinions,Victory is concerned with the eternal glories and ignominies of players and pursuits the world over. From sumo wrestling to nautical jousting, 80's icons to Olympic hopefuls, Victory unearths the sublime joys of the sporting life through reportage and oral history, photography and illustration. Drawing on a group of quality contributors, Victory provides a forum for work that is unapologetically enthusiastic and uncompromisingly personal. It speaks to an audience that like its founders can distinguish the enduring from the fleeting and is ruled, above all, by an irrepressible curiosity and love for the deep spectrum of emotions and aesthetics one finds in sports. [ Continue reading ]

Please Do Not Enter

We are truly amazed by what in our eyes is one of the most inspiring retail concepts of late, which opened its doors in Los Angeles in April of this year. The store named Please Do Not Enter is a one-of-a-kind progressive men’s luxury retail and exhibition space in the heart of Downtown Los Angeles, offering an eclectic array of exclusive, carefully selected and timeless contemporary goods. From design to art and fashion, each piece has an unheard-of story that the founders, Nicolas Libert and Emmanuel Renoird, are longing to share with its visitors. From a vision, we totally agree with, moving away from hype brands and temporal trends, Please Do Not Enter offers a genuinely subjective collection, an as they call it themselves: ode to modern life. Pleasing the eye goes hand in hand with timeless quality and functionality, hybridizing the traditional gallery concept of tight curation with a retail space urging everyone to enter despite its name telling the opposite. [ Continue reading ]

The Rapha Continental project began in 2007 with the clear ambition to explore the road less travelled, discovering the things you only find out when cycling the open road. That sense of camaraderie which comes from sharing the effort and the adventure of meeting new places and people along the way has been the key motivation for a string of beautiful rides through the years. Last year it brought a group of riders to the Dutch shoreside called Hoek van Holland, in weather conditions making it a rather typical ride for our little country. Wind, rain, followed by some sun and always those returning threatening packs of grey clouds. Typical Dutch circumstances, and therefore contrary to many other countries, stopping very few Dutchmen and -woman from actually getting on a bicycle when it is needed. This culture of dealing with nature despite its hardships was also translated to a beautiful iconic poem written in 1936 by Hendrik Marsman named  'Remembrance of Holland,' which inspired the whole feel of the The Rapha Continental — Hidden Europe: Holland, resulting in a beautiful film by  e r t z u i ° film serving the spectator a ride ones loves to hate. [ Continue reading ]

Why I Love Tattoos

Since the 80's Dutch photographer Ralf Mitsch has been fascinated by what lays behind the people who are heavily tattooed. What motivated them, what role do the tattoos play in their particular life or even their vision on the world? With his on-going series 'Why I Love Tattoos' the photographer has been asking these questions through his lens for many years, and last month the project resulted in the first printed publication. The book, which was released in May and will have its official launch on the 15th of June in the Amsterdam-based NAME Gallery, the spectator is offered a selection of subjects which Mitsch has had before his lens, to find out about the stories behind that Maori tribal design, traditional Japanese body tattoo or a collection of smaller tattoos totally filling one's arm or leg. The book contains more than 50 beautiful, full-page portraits of people from all over the globe who have visited the photographer's studio through the years. Each photographed tells a personal story of the hidden truth behind their tattoos, plus features a short interview by (heavily tattooed) author and journalist Henk van Straten, who's also one of the subjects featured in the book. [ Continue reading ]

Founded by wine-expert Katharina Riess, Florian Breimesser and Moritz Firchow in 2012, despite living 10.000 kilometer apart, Love Me Los Angeles is not just your average distinguished winery. The brand which was created goes beyond a lot of brands in the field and expresses the shared values of the founders and the universal spirit of seizing a dream and making it happen. A declared passion for locally manufactured and authentic products of highest quality by the three partners led to the release of Love Me Los Angeles's first edition, the Pinot Noir 2009, which is limited to a number of 500 bottles urging its consumer to seize the moment as well, before its gone. The ever-inspiring Deutsche & Japaner translated the philosophy of Riess, Breimesser and Firchow perfectly on a material level, bringing ideas to craft, as they collaborated with the highly talented Sergey Shapiro on the lettering, making the project extremely inspiring on different levels. [ Continue reading ]