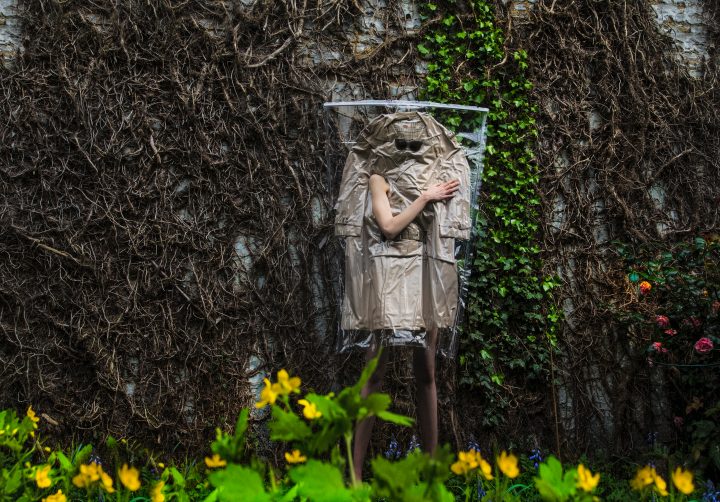 Eye on the future
After discovering the extraordinary work of Belgian fashion designer Jurgi Persoons by chance, a little under ten years after his eponymous label closed shop in 2003, the Royal Academy of Fine Arts Antwerp graduate continued to be much of an enigma. The legacy of his raw-edged romantic vision includes punk-spirited seasonal presentations in Paris along the bank of the Seine and on a deserted parking space, at that time breathing new life into the anti-fashion spirit of the Antwerp Six (and Margiela), who had started a decade earlier. As most of Persoons' vision (who withdrew from the fashion world after 2003) lays hidden in a time before the internet started absorbing everything that takes place, only bits and pieces are still to be found now, with every once in a while a piece from his hands popping up on eBay.

Six years ago, after years of working in the printing workshop of his partner, Persoons had returned to fashion, but in a completely new capacity: as a teacher at the Royal Academy of Art The Hague. There he becomes the Head of Fashion and Textile in 2013, which finally granted me the chance to sit down with him and learn more about what had fascinated me for so long, right before the graduation show of 2016. With the new graduation show upon us tomorrow, we sat down another time to speak about the rather eventful last twelve months and how it brought Jurgi new perspectives, both as Head and through the (highly surprising!) return of fashion design in his life. [ Continue reading ]

Yesterday marked a highly significant milestone in the 9 year history of our close friends online magazine Fontanel, after the release party on Friday evening at Mendo they officially released their very first printed publication: the definitive showcase of the best design talents who graduated in the Netherlands named 'Dutch Design Talents 14'. The 208-page hardcover book features 19 talents, agency visits, sharp columns and an inspirational dialogue with leading creatives on "the gap" between education and work. This first introduction to an international audience was elegantly designed by Rob van den Nieuwenhuizen (drawswords) and mainly resolves around the 19 talents graduated from renowned Dutch art schools like Eindhoven’s Design Academy, Amsterdam’s Rietveld and The Hague’s Royal Academy of the Arts, after which subsequently a narrative on the overal climate of the current dutch creative culture was formed. Each of the talents is remarkably distinct, one of them is for instance Bob Schiller, who created the EPO Bicycle which we wrote about last year. But despite all the differences in what they created and why, they all share something special in the eyes of Fontanel Chief-editor Willem van Roosmalen: "the combination of a promising attitude and unspoilt creative thinking." [ Continue reading ]

We are avid fans of independent magazines and even collected first editions of every magazine we could get our hands on at one point. Therefore we support any significant stage that is given to the beautiful printed products. The largest stage for indie magazines in Europe is Facing Pages: a biennale in the Dutch city of Arnhem celebrating every aspect of the independent magazine, of which the third installment will start the 28th of March. During the festival the city centre of the city, known for its fashion academy, will be transformed into a free haven for magazine makers and lovers. In this year's edition with the theme 'Make magazines not War', a great selection of interesting individuals will participate, focussing on the power of magazines to be a tool for change. Among them are Patrick Waterhouse, creative director at COLORS Magazine, Matthew Holroyd and Jonathan Baron of the beautiful Baron Magazine, Rachel Maria Taylor and Jody Daunton of Another Escape, Francesco Franchi the writer of 'Designing News' and from the Netherlands: Jeroen Boot of Soigneur. [ Continue reading ]

The Dutch artists Lernert & Sander continue their string of fascinatingly beautiful projects with their concept named 'Last Season'. Amsterdam-based Lernert Engelberts and Sander Plug created a concept in honor of the arrival of the new seasonal collections at high-end Maastricht-based boutique Kiki Niesten, which yearly creates a concept in honor of the TEFAF Maastricht art fair. 'Last Season' revolves around the reduction of last season's knitted garments by Céline, Chloé, Jil sander and Prada to balls of yarn: "symbols of hope and aspiration." From the 14th until the 23th of March of this year, the results of the proces will be showcased in the window display of Kiki Niesten. Every year during the renowned art fair TEFAF, the prestigious boutique in the heart of Maastricht takes pride in participating artistically to the TEFAF experience, with this year resulting in the great collaboration with Lernert & Sander. [ Continue reading ]

Together with Fontanel, we were invited by the Guggenheim Bilbao to visit the Riotous Baroque exhibition and enjoy a little of Bilbao. While the weather in the Netherlands dipped into some early autumn, it was a good time to escape to this sunnier part of Europe. And flying to Bordeaux, driving myself along the coast to Bilbao wasn't bad at all.
After driving along one of the most beautiful coastlines of Europe, crossing Biarritz and San Sebastian, Bilbao feels like a real hidden gem, with Frank Gehry's Guggenheim as the pearl in the centre of the city. A beautiful place, in the late 20th century transformed from a dirty old port into one of the worlds most iconic art cities and very much not what you'd expect of a Spanish city. The mix of the old and new architecture, in combination with its clean streets, green parks and the fresh breeze from the sea, is beautifully translated in a new exhibition where the 17th-century baroque artists are perfectly mixed with contemporary art. [ Continue reading ]

Tê Timer is a collaboration between Swedish Afteroom and Taiwanese Waterfall, materializing the relationship between tea and time in one product. The joint venture is a bound publication of a graphic arts collection curated by Waterfall and at the same time a container of a tea brick produced by Afteroom.  [ Continue reading ]

Taylor Holland, a designer and photographer from Oklahoma currently based in Paris, made this crazy series of pictures of the tourist buses visiting Paris. Love these retro colors, air-brushed pictures and 80’s stripes and shapes. (Via Fontanel)… [ Continue reading ]

Friday october 30 Fontanel and Nieuwe Garde organizing a new issue of 60 Minute Magazine during the ‘Internationaal Beeldfestival Rotterdam‘. Participants will get 60 minutes to create a complete magazine issue – if you’re around, want to share your creativity in journalism,… [ Continue reading ]

My Dutch friends at Fontanel made a nice overview of the 2009 graduation shows of the dutch academies. Tonight the show of the design department at HKU will take place with the graduation project of Jonathan Looman (the code boy behind Anothersomething). [ Continue reading ]