I love listening. It is one of the only spaces where you can be still and moved at the same time. — Nayyirah Waheed — Saturday August 3rd — 21:32 (CEST) —

“What art does — maybe what it does most completely — is tell us, make us feel that what we think we know, we don’t. There are whole worlds around us that we’ve never glimpsed.” Greil Marcus — Saturday August 3rd — 21:32 (CEST) —

Anish Kapoor is one of the most important of the world’s contemporary artists. Since his first sculptures, simple forms with paint pigments spread out on the floor, Kapoor has developed a multi-faceted oeuvre using various materials, such as stone, steel, glass, wax, PVC skins and high-tech material. In his objects, sculptures and installations the boundaries between painting and sculpture become blurred. For his first major exhibition in Berlin he will use the whole of the ground floor of the Martin-Gropius-Bau, including the magnificent atrium. Some of the works will have been specially designed for this venue. The show, comprising about 70 works, will provide a survey of the abstract poetic work of this winner of the Turner Prize from 1982 to the present. [ Continue reading ] 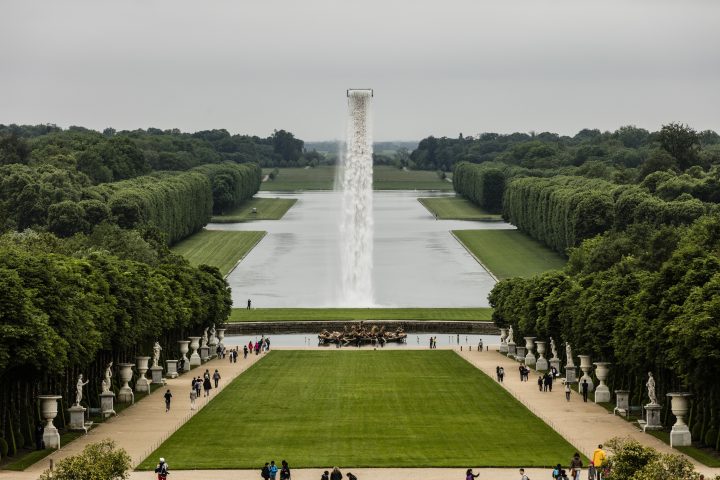 Opening today, the great Danish-Icelandic visionary Olafur Eliasson returns with another prestigious show taking the exhibition of his creative vision to the next level, being located in the most remarkable environment until date — having been the home of cutting edge art and design from different eras since the moment it was finished by French King Louis XIII in 1623: Château de Versailles. Herewith he follows the likes of Jeff Koons, Takashi Murakami and Anish Kapoor, amongst others, who in the modern art program that started in 2008 have brought their vision to France's most famous chateau and gardens.

Earlier shows by Eliasson in contexts like the Louisiana and Fondation Louis Vuitton underlined that he is undeniably part of the most influential artists of this time — the show in the Versailles could be seen as a marker that he will continue to be seen that way even in the far future. Seeing the highly aesthetic creations full of narrative by Eliasson in the historically charged context, having (and still does so) housed centuries of French aristocratic splendor, forms a fascinating clash of representational icons of different stretches in space of time, without it feeling unnatural in any way. The different creations that can be found in the estate, partly having been created exclusively for the exhibition, came to life in Eliasson's head while wandering the grounds, sometimes alone at night, when no one was around. Among the most impressive creations is the structure named 'Waterfall', fulfilling an original idea of the 17th Century landscape architect André Le Nôtre, which couldn't be realized at the time when the Château and its gardens were originally constructed. Finishing a story which first grew in someone's imagination centuries ago and seeing the for the artist familiar immaculate execution of such idea hits a delicate nerve, which inspires us deeply.

Make sure to travel to Versailles and step into this remarkable collision of past and future before the show closes on the 30th of October. We will. [ Continue reading ]

We are major New York City-based ISAORA fans since we found out about their extraordinary rainwear collection, which was released earlier this year. The brand was founded by the very talented Ricky Hendry (pictured left) and Marc Daniels who both were itching to start a new venture in spite of the rather downward economical circumstances when they began in 2009. Although it certainly wasn't an easy road, in 2013 Ricky and Marc were the winners of the Council on Fashion Designers’ Incubator, “designed to support the next generation of fashion designers in New York City,” signifying both designers’ strong drive and will to succeed in finding strong intrinsic roots to let their brand grow, which was also noticed  by the CFDA. In its starting years the brand was sold at high-end boutiques like Barney's New York and Opening Ceremony, but since two seasons they sell directly to its customer online, with this season as a significant marking point, with the different collections clearly arranged under the monikers Movebetter, Trainbetter, Feelbetter, Staywarmbetter and the extraordinary Staydrybetter collection. Being highly inspired by Ricky and Marc's beautiful products and bold approach we've asked Ricky a couple of question in order to find out what inspires him, both in the past, his work, and in every-day life. [ Continue reading ]

We are still amazed by the work of Studio Toogood, when they collaborated with Hermès for their petit h collection, at the end of last year. Hermès petit h was established in 2010 as a series of products using the brand's offcuts and rejected stock, which proved to be a highly inspiring concept for designer Faye Toogood. The entire ground floor of the flagship Bond Street store was dedicated to a custom-designed interior that acted as an antidote to London West End slickness. The created aesthetic for the store reminds us highly of the work of Anish Kapoor and is one of the more daring designs we witnessed within the field of (luxury) retail spaces. [ Continue reading ]